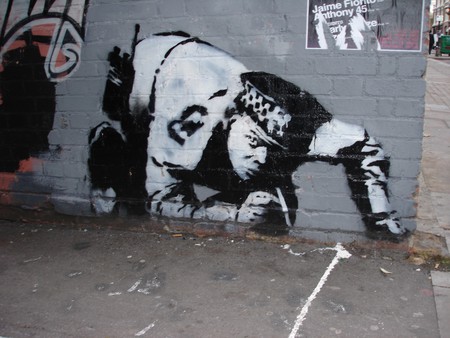 After a lengthy restoration process, a 12-year-old Banksy has been returned to its former glory in East London’s Shoreditch.

Back in 2005, Curtain Road became a popular pilgrimage destination for Bansky fans when his now ionic Snorting Copper appeared on the corner of number 115.

At the time, street art wasn’t deemed an important cultural addition for the community as it is now and councils were in the habit of painting over pieces of vandalism as quickly as they appeared. So it’s not surprising that Hackney Council decided to paint over the Banksy stencil of a policeman kneeling down to supposedly snort a line of cocaine off the pavement.

Now, some 12 years later, the work has been restored and will be returned to the site of its origin later next week for the public’s enjoyment and appreciation.

Jonathan Ellis, Managing Director of Hamilton Court Developments, took the lead on the restoration after being alerted to the existence of the ‘hidden Banksy’. ‘It was the coolest thing we’ve had the opportunity to do!’ said Ellis. ‘Our love of street art combined with the desire to bring back something that was once thought lost; it’s very rare that you get an opportunity like this.’ 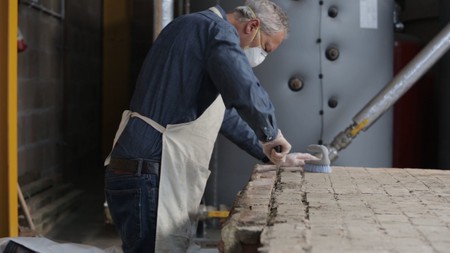 Restoration of the Banksy | Courtesy of Global Street Art

The two-ton wall, where the work was, had to be carefully extracted so it could be transported to the Fine Art Restoration Co, who had been tasked with bringing the Banksy back to life.

As feared the work had been severely damaged through vandalism and the attempt to extract the work with an angle grinder. ‘The damage was extensive and the artwork was significantly hidden by multiple layers of over-painting, ‘ said Chris Bull, Technical Director at Fine Art Restoration Co. 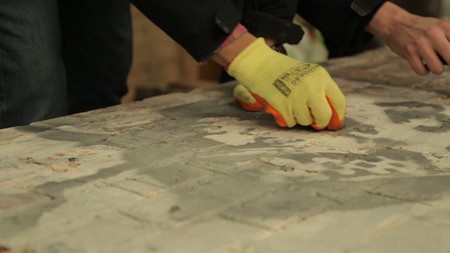 Restoration of the Banksy | Courtesy of Global Street Art

So after a hardcore 12-week restoration process by a team of 11 restorers, the work was unveiled last night at a special unveiling ceremony. ‘We didn’t want it to sit in a gallery – that’s not where it’s meant to be – it’s meant to be free for the public to enjoy!’ said Ellis. 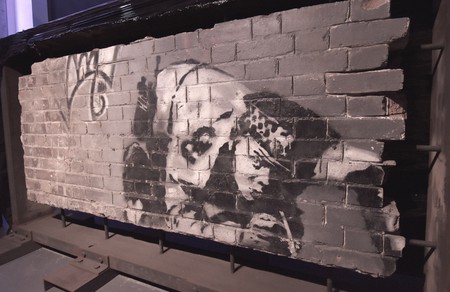 It’s timely the piece should be back on public display after Banksy’s most recent stencil in Barbican on Golden Lane, that pays homage to Jean-Michel Basquiat (currently on view in the Barbican art gallery) has now been covered with plastic sheeting to protect it. 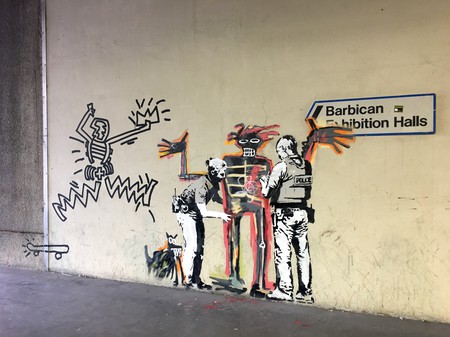