Restaurant Of The Week: Hoppers 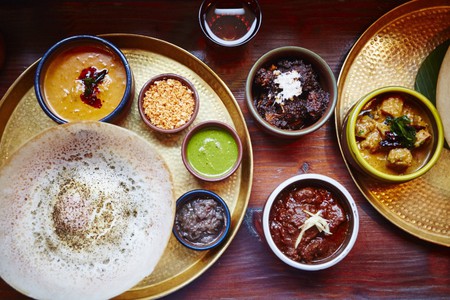 Every week, The Culture Trip handpicks a standout restaurant to review and feature. From drinks to dessert, we give you the full lowdown on every aspect of these London spots. On a mission to wade our way through all the eclectic cuisines on offer in our city, this week we checked out Hoppers in Soho for a taste of Sri Lankan cuisine.

Think of a sublime Sri Lankan restaurant in London off the top of your head. Can’t do it? Neither could we before we tried out Hoppers. Sri Lankan restaurants in the central areas of London are few and far between, and so when Hoppers hopped onto the scene, it introduced an entirely new concept to Soho. The people behind this venture are none other than the group who keep knocking it out of the park, the Sethis, who also run Trishna, Gymkhana, Bubbledogs and Bao. Hoppers, however, is largely run by Sunaina Sethi’s husband Karan Gokani, who has a particular fondness for Sri Lankan dishes. A Hopper, or Aappam, is actually a thin, bowl-like pancake made of fermented rice batter and coconut milk, a popular and common dish in southern India and Sri Lanka. Apparently, the word Hopper originated from the manner in which the British pronounced ‘Aapaam.’ Hmm, we can’t really see how that happened! 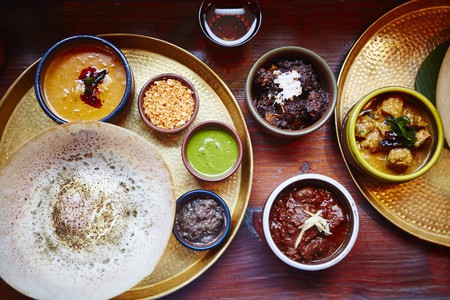 There’s a 98 percent chance (a Culture Trip guess) that if you turn up at Hoppers you’re going to have to queue, as they don’t take reservations and are ridiculously popular for both lunch and for dinner. The wood-panelled space is buzzing, with eclectic Sri Lankan music adding authenticity to an otherwise modern, rather Soho-ish spot. Patterned tiles, Sri Lankan posters and devil masks adorn the walls; the small space with 36 covers projects a kind of darkening sunset feel, which dims the room and makes it cosy.

If the menu’s glossary doesn’t provide all you need to know to correctly order your dishes, this lot most certainly will. ‘Get stuck in’ is the main advice when the dishes arrive; truthfully, if you’ve never eaten with your hands, no one will be particularly impressed, so you might as well go for it (runny egg and all)! The waiters and waitresses, dressed in polo shirts and enthusiasm, guide you through the process and make you feel like you’re having a full-on cultural and exotic experience in the heart of Central London. 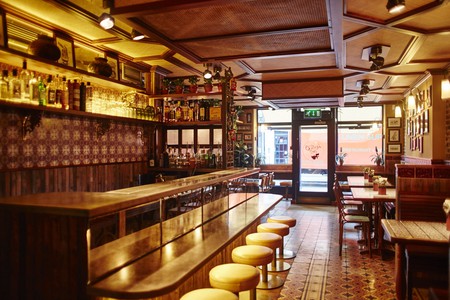 Drinks are not the highlight at Hoppers, although the cocktails – called ‘hards’ on the menu – are fun to experiment with and contain unexpected flavours such as green peppercorn, saffron, and cardamom. There are only two choices for wine, one white and one red (unsurprisingly) and a range of liquor that places Ceylon Arrack, a spirit distilled from the sap of a coconut flower, at the forefront.

The hot butter devilled shrimps, arriving on a small rounded plate, are beautifully plump and are smothered in an orangey-red sauce with a warming, buttery undertone that settles the hit of spice. The mutton rolls, however, simply irritate. Only because there are only two. Similar to croquettes, the rolls are deep fried, breaded parcels that are crisp to the bite and contain the rich meatiness that you’d expect in a flavourful curry. Accompanying the rolls are a ginger, tomato, garlic and chilli sauce for happy dipping.

Now this is where the restaurant’s namesake have their 15 minutes of fame (or however long it takes to gobble them). Dosas and hoppers are served with a choice of karis (curries) ranging from fish and black pork to red pumpkin and duck. Despite curiosity about the two veggie karis, we opted for fish and lamb. The fish kari is fiery and contained a distinct taste of coconut, whilst the sauce of the lamb kari was like rich, meaty gravy infused with a world of spices. Mustard seeds and slinky strips of ginger are peppered about the dishes, adding yet another element to the pleasant overload of tastes that fizzle and excite the tongue. The experience is incredibly interactive, as you continually reach over to tear off bits of the hopper (with or without a runny egg baked onto it) to dip into your choice of kari and then further dip into the little pots of chutneys and sambols (relishes) that you can order alongside your hopper or dosa. 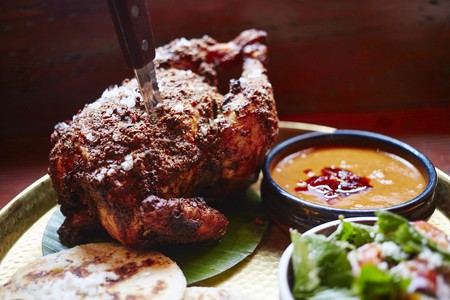 Hoppers has successfully filled a rare gap in the London culinary scene. An experience as well as full-flavoured food, it offers a cultural hint of Sri Lanka with its devotion to authenticity. We will be returning to investigate the famed Ceylonese spit chicken that we have heard so much about. If it’s as good as the rest of the menu, it won’t disappoint!