No Time to Waste: Britain’s Most Ethical Chef Finally Lands in London 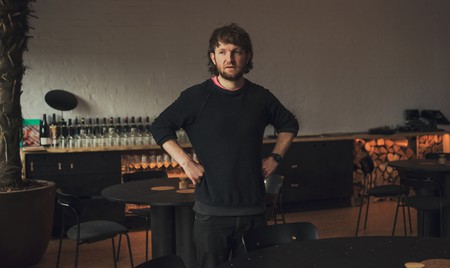 After years of waiting, Silo – the revolutionary zero-waste restaurant helmed by chef Douglas McMaster – has arrived in London. With the eyes of the world fixed on him, can he transform the way we think about waste? 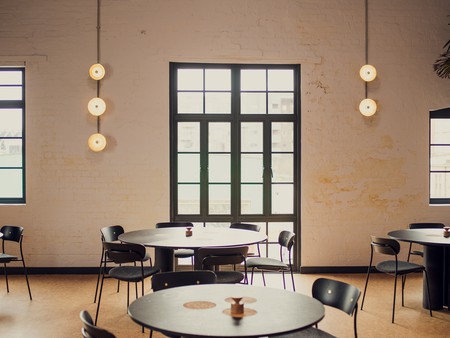 It isn’t hard for Silo’s head chef, Douglas McMaster, to go down a rabbit hole.

“People don’t question waste. Our generation just sees it as ‘a thing’, you know?” he says, zoning out, staring into the middle distance as he gestures at the Hackney Wick waterway beneath his restaurant. “You wouldn’t question a boat or a window or a stadium. They’re just things, and to us, so is waste. But waste didn’t exist 300 years ago; it’s a very, very modern phenomenon, and only humans create waste.

“What is waste? Why does it exist, and how do we get rid of it?” he asks, before moving on to industrialism, fracking, post-war rationing, the creation of Mighty White bread, the life cycle of shoes and the millions of uses for plastic. All before a question is asked. 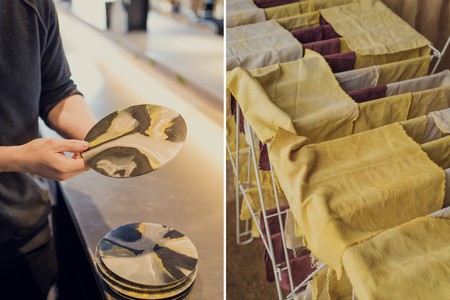 McMaster is serious about zero waste: his plates are upcycled and his washcloths are reused | © Lewis Khan / Culture Trip

These are the unfiltered thoughts of Britain’s next superchef. McMaster’s star is irrepressible: his zero-waste restaurant, Silo, has finally arrived in London after five years in Brighton, and to mostly rave reviews (with the exception of one desultory hit piece). His book, Silo: The Zero-Waste Blueprint, has sold in the tens of thousands of copies all over the world, topping book charts for organic food, food science and environmental philosophy. He’s had a film made about his exploits in Brighton, countless newspaper profiles and even a blessing from the pope of haute cuisine, Alain Ducasse (who at the peak of his powers held 21 Michelin stars).

McMaster has made his name through taking zero waste extremely seriously. His light fixtures are made from ground-up glass bottles, and his furniture from mycelium mould grown on stacks of field waste. He has personally visited every farmer and every supplier at their source to check their standards and ensure that they deliver to him in reusable containers, minimising the wastage on their side as well as his. He has even trekked seven hours each way in an electric van to Lizard’s Point on the south coast of Cornwall, where the salt he uses is harvested.

“You just know, when you find the right supplier. It sounds like a cheesy love story quote, but you just do. Building a good relationship with them means that their standards are likely to stay higher. I mean, there’s a respect there, and value, which means they won’t slip,” says McMaster. 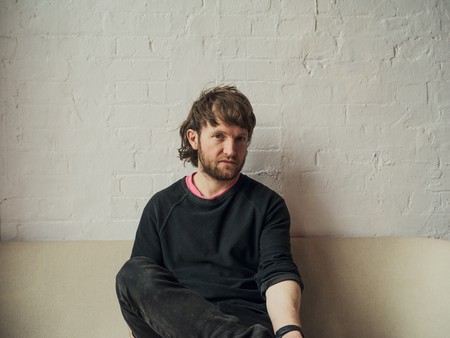 But a good ethos counts for little if the food doesn’t deliver, and thankfully, it does. For all the expectations you go into Silo with – and you will have them, given just how much it has been written about – the world-saving philosophy melts away when the dishes start coming out. You don’t see flour milled in-house to save on transport and packaging; you eat freshly baked sourdough, tangy and light, with a curl of cultured butter on the side. You don’t get a sermon on the life and loves of the retired dairy cow you’re served, or the scoop on how much of the cow butchers throw away because of lack of demand; instead, you get their rib meat, braised under intense pressure until it yields to the gentlest suggestion of a fork and glazed with a sticky reduction of vegetable peelings.

But who is the star of the show: McMaster, or his menu?

“In Brighton, we were awarded the title of Britain’s Most Ethical Restaurant; we were featured in the World Restaurant Awards,” he says. “But it was a real struggle behind the scenes. You can fly off to São Paulo and give a TED Talk about what you’re doing, but that audience doesn’t see the broken dishwashers, the chipped kitchen counters, the broken seats that gave people splinters.” In Hackney, there’s no place to hide; London’s fickle, unforgiving restaurant scene leaves Silo exposed to the elements. Silo is on a crusade against waste, putting in practices that go beyond any restaurant on the planet – but to succeed, and to set the standards for the rest of the food industry, they first have to survive. 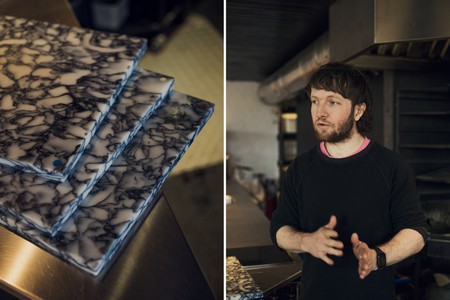 Finding out what McMaster thinks about waste is relatively straightforward. You don’t really need to ask – if you give him enough time, he will tell you unprompted. But what he thinks about food is far harder to pin down.

“If I was speaking on behalf of the environment,” says McMaster, who does very often speak on behalf of the environment, “I would say that food is literally just sustenance, fuel – part of the system. But humans have romanticised food, and so the enjoyment of it, and the sharing of it, means so much more. My motivations are a bit different; I see myself more as an architect of food, so to speak. I don’t love it as much as I see others loving it.”

McMaster didn’t think very much about food when he was younger, either positively or negatively. His diet was normal: baked beans, white bread, fish fingers, SunnyD, Turkey Twizzlers – cornerstones of the industrial food system he now rails against. But they didn’t motivate him to consider the finer points of food waste in the way he does now. Instead, what led him to the kitchen was hating school. “I’m dyslexic, dyspraxic, and I think I have ADHD. I’ve never been diagnosed, but I think I am,” says McMaster. “I’ve read about five books in my life, and each time they’ve been very, very, very hard work.” 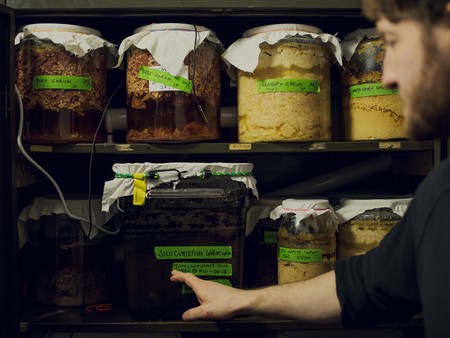 Kitchen life, however, came exceptionally naturally to him. His approach to cooking – expressive, intuitive, unbowed – brought him personal accolades with remarkable speed. He was Yorkshire Young Chef of the Year at 20, BBC Young Chef of the Year by 21 and earned the title of Britain’s Most Irreverent Chef at the Young British Foodie Awards in 2012, aged 24. His CV glitters: two years on staff at St John Bread and Wine in Shoreditch and spells in the kitchens of Noma, Faviken and The Fat Duck.

Discipline was harder to acquire, however. “I was one of the worst chefs in the St John kitchen,” says McMaster. “But the head chef, James Lowe, constantly told me I had a bright future. He kept on at me; he let me get things wrong, but then he reminded me that there’s a time and place to get things wrong. He was a really good mentor.”

Only after leaving Europe for the balmy climes of Melbourne would McMaster truly find his feet, after meeting the pioneering zero-waste prophet Joost Bakker. It was Bakker who first asked McMaster to imagine a world without waste; it was Bakker who let McMaster run free at the very first iteration of Silo, as a café in Melbourne; and it is Bakker who continues to support McMaster to this day. Theirs is something of a sensei-student dynamic, and McMaster is unafraid to credit Bakker with transforming his entire world view. 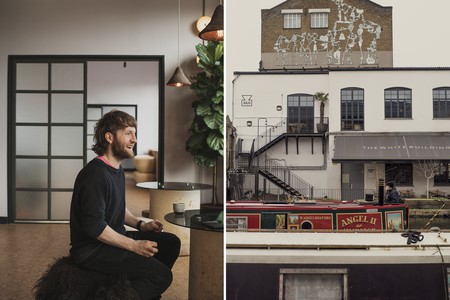 Now that he is settled in London, he is likely to be in the capital for some time yet | © Lewis Khan / Culture Trip

Over the three iterations of Silo – Melbourne, Brighton and now Hackney – the momentum has been unceasing. McMaster is first to recall the struggles, the failures, the disasters, but the plaudits have stacked up and snowballed. Melbourne’s Silo won awards for Restaurant of the Year, Dish of the Year and Most Sustainable Restaurant within six months of opening. Brighton’s Silo spent long enough leading the country’s sustainable food scene, winning practically every award it could for ethical cooking. McMaster even won a Sustainable Champion Award at the 2019 Good Food Guide Awards, and a coveted nomination for the Basque Culinary World Prize, before Hackney’s Silo had a chance to turn its lights on.

McMaster acknowledges that when he opened Brighton’s Silo in 2014, he had no choice of opening in London “because nobody took it seriously – they thought it was a fad”. But his new space – which it would be safe to assume will be his space for decades to come – has been taken very seriously by the city’s clientele. He now has the opportunity to establish a Silo way of doing things, to lead from the front with a world-class restaurant serving spectacular food, which just so happens to be free of waste. “People come to Silo and say, ‘We want to see zero waste,’ but there’s nothing to see,” says McMaster. “This is just the way things are going to be in the future. It has to be.”