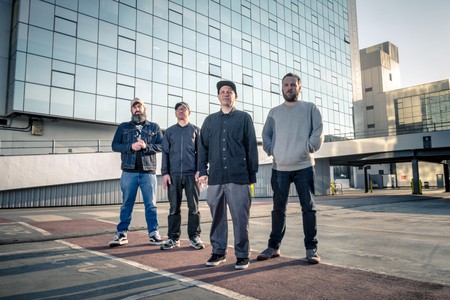 Mogwai are performing as part of Meltdown | © Brian Sweeney

“Probably the Scottish weather. That’s probably where it comes from. Either that or the failures of the Scottish football team.” Guitarist Stuart Braithwaite is chuckling to himself as he explains why his band Mogwai make such mournful music. “Those are probably the main sources of sadness in Scotland.”

The band’s melancholic post-rock conjures up stark soundscapes that ebb and flow with emotion – finding beauty in a dense fog of despair that is carefully created with layer upon layer of guitars pushed to ear-splitting levels.

Fans will get the chance to witness this up close when they play a one-off show as part of Meltdown at London’s Southbank Centre. The band were invited by this year’s festival curator, The Cure frontman Robert Smith. “We’ve played quite a few shows with them during the years and kept in touch. It was really nice of him to ask us to play when he was organising the festival,” says Braithwaite.

“I’m a huge The Cure fan. They’re one of my favourite bands. It’s very personal music. They’ve made amazing records and played legendary shows where they perform for hours and hours. Not many other bands can do that without people wanting to leave.”

Mogwai command your undivided attention on stage. From their debut Young Team in 1997 to last year’s Every Country’s Sun, the band have fine-tuned their sound. They thunder and roar, building up into a deafening wall of noise but also weave fragile melodies in between. It’s the calm before the storm and the violent squall in one deluge.

The band, named after the mischievous creatures in the 1984 movie Gremlins, has produced nine albums since forming in 1995 in Glasgow. They have also scored several soundtracks for TV and film, most notably Zidane: A 21st Century Portrait and Les Revenants.

When it comes to making music, there are no big themes to explore, nothing specific that inspires them to create. “We just start writing music and see where it takes us. We just see how it’ll end up and try to make it as good as possible,” says Braithwaite.

While it may seem like they’ve cracked the quiet/loud/quiet/loud formula, Braithwaite claims their sound has evolved subtly over the years. “The instrumentation has changed. We’ve got a lot more synthesisers and pianos. We like to discover new things and new ways of doing things.”

Another thing that has changed since they first got into the industry is how much more difficult it is for working-class bands to make their mark. Braithwaite has been vocal in the past about how it’s now dominated by already well-off artists as record labels make cutbacks.

'Donuts' is taken from our original motion picture soundtrack for the upcoming movie @kin – our first feature film soundtrack. Directed by @redbikebluebike, it will be released on 31 August. Stream / download – mogwai.co.uk #KINmovie

“Now there’s less money in recorded music a lot of labels are going with bands that are completely self-sufficient. People are cutting back and making safe choices. Obviously, this excludes a large section of society especially in the major label world. People from a certain background are getting the opportunities that everyone used to get.” But there are things that can be done now to redress the balance.

“It’s the labels looking a bit harder to find musicians who aren’t in a privileged position. Also a big difference is changes in the benefit system so people can work on their art and their music. There isn’t that opportunity anymore. I can’t see that changing sadly.”

The band are currently working on a soundtrack for a secret TV project and will be releasing the score for upcoming sci-fi film KIN next month. Mogwai’s music has been largely lyric-free over the years, although they occasionally bring in a guest vocalist like Aidan Moffat and Gruff Rhys of the Super Furry Animals and sometimes have a go at singing themselves.

There is one musician in particular they’re dying to work with. “Iggy Pop would be great. That’s definitely someone I’d like to get. He’s just a really passionate singer and has a really unique voice and great energy.”

Mogwai have been together for over 20 years since Braithwaite and Dominic Aitchison roped in old school friend Martin Bulloch to join their band. They’ve since been joined by Barry Burns. Stuart claims they get on better than ever because they “know each other better”.

When they first started out, their goal was simple. “We just wanted to make loud atmospheric music. We were inspired by bands like The God Machine and My Bloody Valentine.”

Even though their music shakes the eardrums, it also stirs the soul. They acknowledge how its contemplative nature has become a refuge for their fans.

“Our music is an escape. People can get inside of their own heads and forget about everyday life.”

Mogwai perform at Robert Smith’s Meltdown at Southbank Centre on 21 June. For more information visit Southbankcentre.co.uk. ‘Donuts’, the first track from KIN, is out now.