Meet Zak Ové, the Sculptor Inspired by the Myths of Carnival

As the first British Caribbean artist to be exhibited in the British Museum’s permanent collection, Zak Ové is receiving the recognition he deserves. Here, the artist tells us about mining his cultural heritage that encompasses Trinidad, Ireland and the African Diaspora.

The minute you walk through the door of Zak Ové’s North London home and studio you’re transported into another realm. Filled with his sculptural works that are made from all manner of cornucopia including toy cars, mannequins, beads, old phones, skulls, textiles and electrical parts, you are confronted with how we imbue symbolism in all kinds of inanimate objects. 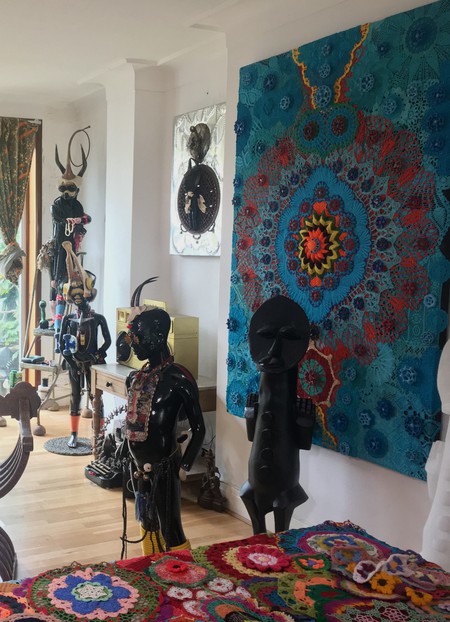 By the front door a waist-height wooden sculpture catches my eye. It’s the figure that inspired Ové’s acclaimed installation, The Invisible Man and the Masque of Blackness, which was initially shown at Somerset House’s courtyard for last year’s edition of 1:54 and is now on view at Yorkshire Sculpture Park.

The Kenyan sculpture has informed Ové’s artistic practice for many years and finally he found a chance to use it directly in his work. Ové reinterpreted the hand carved figure as a larger-scale granite cast that could be duplicated to form an impressive and overwhelming army of male figures that gives a 21st-century voice to a lost culture.

Zak Ové, The Invisible Man and the Masque of Blackness, 2016 | © the artist

Carnival, particularly in Trinidad, has been a huge influence on Ové’s practice. It’s been central to works such as Moko Jumbie (2015), which consisted of two sculptures that were first installed at the British Museum as part of the Celebrating Africa season in 2015 and are now on permanent display in the Sainsbury African Galleries. Ové mines how African folklore is passed down through generations. Specifically he looks to the ritual of Carnival and how it was (and still is) a form of expression for a repressed culture that was separated, disembodied if you like, from its origin. The translation of such traditions in costumes and carnival processions come to symbolise the emancipation of the self within a collective history.

Ové’s work examines how African Diasposic mythologies can be culturally appropriated to be given new meaning. By incorporating various materials, whether ‘new world’ or antique, his assemblages pay tribute to both Trinidadian and African identities, and give a new voice to lost cultures.

See Black and Blue: The Invisible Man and the Masque of Blackness at Yorkshire Sculpture Park until June 3, 2018.