London’s ‘Signature’ Dishes: How Many Have You Tried? 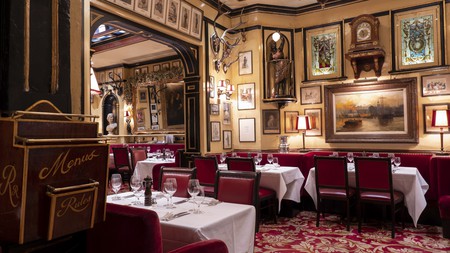 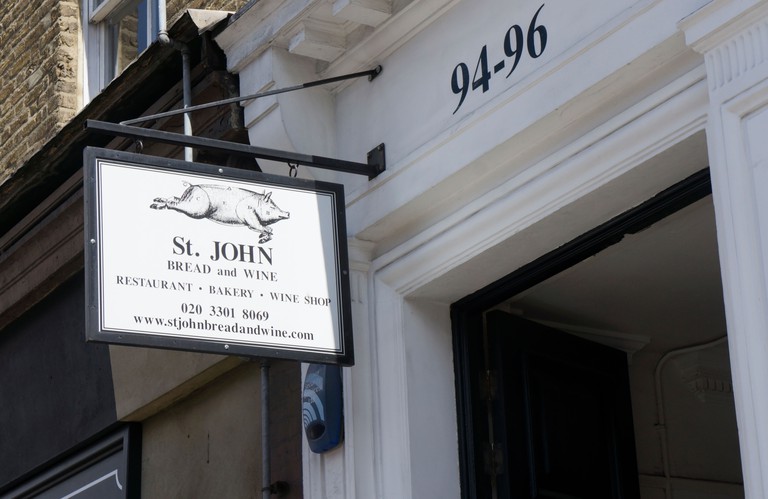 St. JOHN pioneered the concept of nose-to-tail eating | © UrbanImages / Alamy Stock Photo
Book Now
Fergus Henderson and Trevor Gulliver opened St. JOHN on Clerkenwell’s St John Street in October 1994. With its clean, white, butcher-like interior and nose-to-tail ethos, the cooking was an instant hit. One dish on that first menu which has remained there ever since, is the bone marrow and parsley salad. In an interview Henderson once admitted, “It’s a bit cheeky, just roasting bones as a signature dish”. The veal bones are served with a salad of parsley, some fine French sea salt, and two slices of hot toasted sourdough bread on which to spread the marrow. The result? A sort of British bruschetta, and a dish that Anthony Bourdain said would form part of his Last Supper. The actually inspiration came from Marco Ferreri film, La Grande Bouffe, which tells the story of a group of friends who gather for a fatal orgy of food, drink and sex. In one scene, the cast suck on roasted bones, slathering down the soft, juicy marrow. Which is exactly what diners do in the restaurant.
Open In Google Maps
Saint John Restaurant, 26 Saint John Street, Barbican, London, England, EC1M 4AY, United Kingdom
Give us feedback

It takes guts to name your restaurant after a dish you serve, knowing that forever more it will appear on your menu. Thankfully Dan Doherty’s eponymous dish is just interesting and tasty: a confit duck leg topped with a fried duck egg and served on a waffle with a little maple sauce. It’s the sort of total comfort food dish you can eat from brunch until the early hours of the morning – something you can actually do as the restaurant is open 24 hours a day. 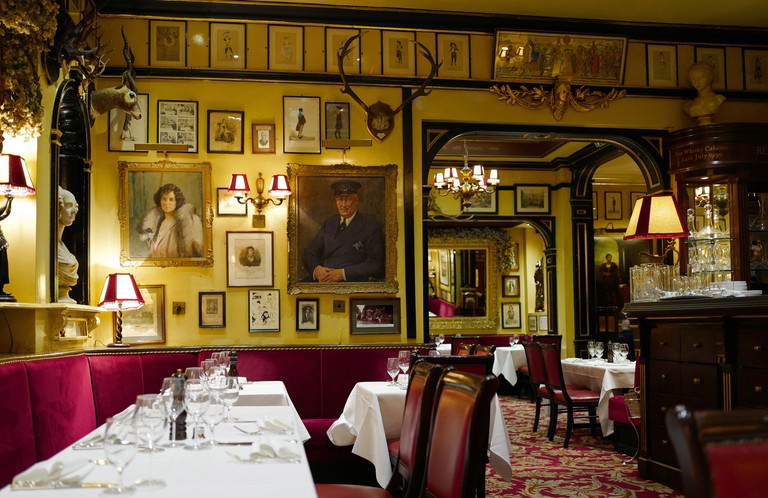 © David Goodwin / Alamy Stock Photo
Book Now
Game, when in season, has featured on the menu of Rules, London’s oldest restaurant, since it opened in 1798. Of all the game dishes, grouse is perhaps the most well-known thanks to the ‘Glorious Twelfth’ which marks the start of the game season. Game is so intrinsic to the restaurant that it actually has its own estate, the Lartington Estate, in the High Pennine. The grouse is roasted quickly, and served with game chips (think big crisps) and a pâté made from the bird’s liver. It’s a dish that hasn’t changed much since Edward VII and his mistress Lillie Langtry ate there in the 1870s.
Open In Google Maps
34-35 Maiden Lane, Charing Cross, London, England, WC2E 7LB, United Kingdom
+442078365314
Visit Website
Give us feedback 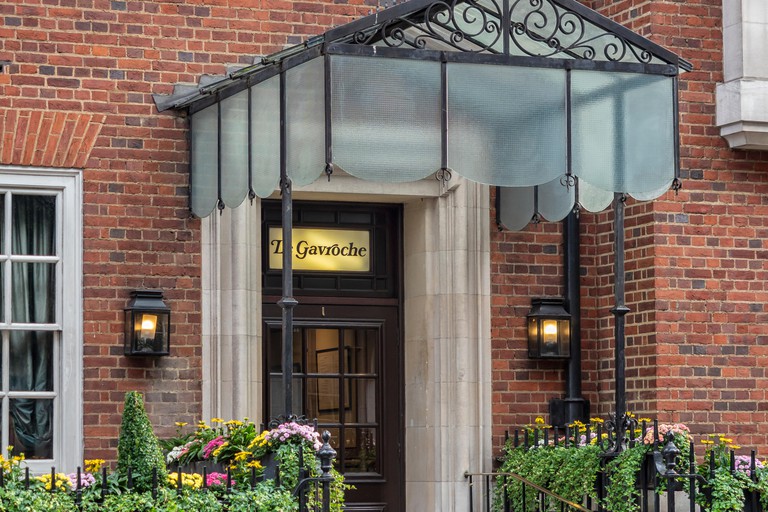 The Roux brothers opened their restaurant in London in 1967, serving classic French cooking. On that first menu was soufflé suissesse, and it’s still there today. Béchamel sauce is mixed with beaten egg whites and lightly set in the oven, before being sat in a sauce of reduced cream, topped with cheese, and returned to the oven for a further five minutes. The result is a light, cheesy soufflé with a rich cream sauce. 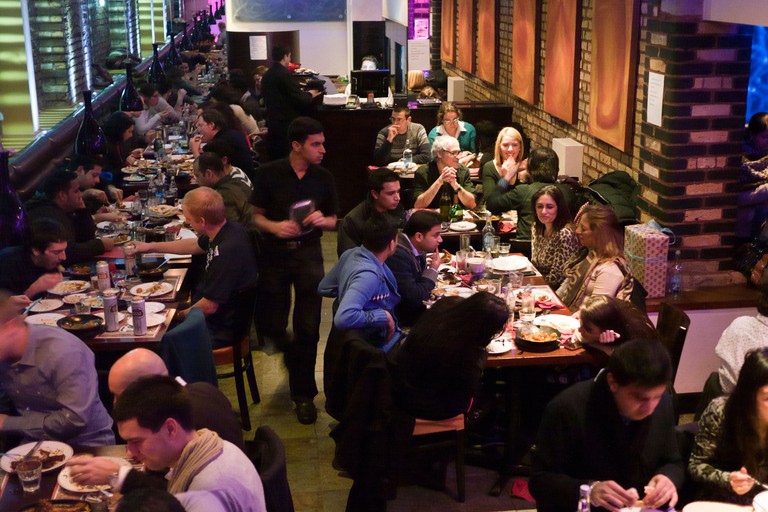 Tayyabs restaurant is famous for its spiced lamb chops | © david pearson / Alamy Stock Photo
Tayyabs in Whitechapel, east London, revitalised an area that was becoming known for post-pub generic curry. It began life in the 1970s as a café, but over the years morphed into the much-loved high-energy restaurant it is today. Meat, heat and spice combine in their stunning karahi lamb chop masala, served with coriander, chopped tomatoes, sliced onions and chillies.
Open In Google Maps
83-89 Fieldgate Street, Whitechapel, London, England, E1 1JU, United Kingdom
+442072479543
Visit Website
Give us feedback

The dead hippy burger at MEATliquor

Restaurant, American, Greek, Vegetarian, $$$
Facebook
Email
Twitter
Pinterest
Copy link
Share
Map View
Practically every street corner in London these days has a venue serving huge sloppy burgers washed down with craft beer in a ‘distressed’, post-apocalyptic US diner interior. But if you were looking for the burger that kicked it all off, then the dead hippy – born in a Peckham carpark – is what you want. The burger contains two French’s mustard-fried beef patties, lettuce, cheese, pickles and minced white onions. But it’s their trademarked ‘dead hippie sauce’ that makes it, and as their cookbook shows, the recipe (complete with elements redacted) remains a closely guarded secret.
Open In Google Maps
37 Lordship Lane, East Dulwich, London, England, SE22 8EW, United Kingdom
+442030660008
Visit Website
Give us feedback

The chocolate nemesis at River Cafe 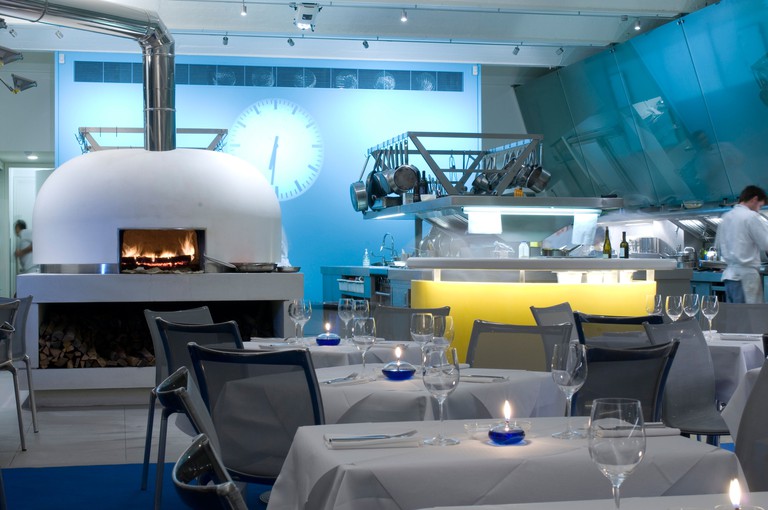 Ahh the River Cafe chocolate nemesis, as indicative of the 1990s as ‘the Rachel from Friends’ hair cut. Famous at the time for being an entirely flour-free cake (in today’s gluten-free world this is no biggy, but back then, folks were amazed), it was also said to be nigh on impossible to make at home, and that the recipe in the first River Cafe cookbook contained an error. What’s more, you had to bake it in a bain-marie or water bath, which helped regulate the temperature and keep the cake moist. Such a cake was devilry and witch-craft to many home bakers raised on rock-solid Victoria sponge. But if you want a slice of the ’90s, it’s still on the menu at the River Cafe.

Omelette Arnold Bennett at The Savoy 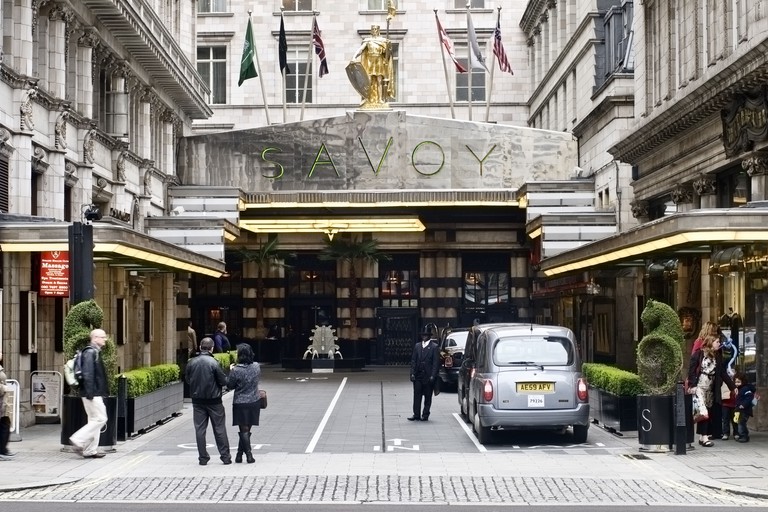 This omelette was invented at the Savoy Hotel, London, in the 1920s in honour of the writer Arnold Bennett who was a guest at the hotel. It’s still on the menu today. The dish features chunks of smoked haddock, cheese sauce, parmesan and of course eggs. Slightly outside London, but worth a visit if you can secure a table, is The Hand and Flowers pub. Here chef patron Tom Kerridge has had his version on the menu since the pub opened. The phrase ’signature dish’ is often overused when talking about food. A chef may labour for an entire career and never achieve a perfect combination of ingredients and techniques that defines them and their cooking style. But for those that do, these dishes achieve a certain life of their own, sometimes long after the chef who popularised them has gone.

So, how many of these dishes have you eaten?