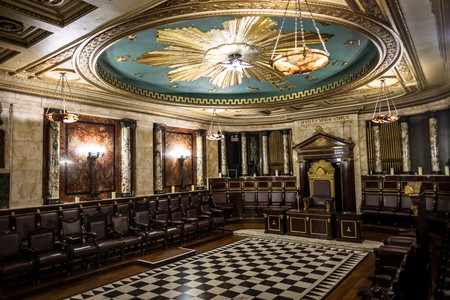 A stunning Masonic Temple, uncovered during renovations at a hotel next to a busy train station in London, now plays host to a series of atmospheric film screenings and events. Thankfully, you don’t need to be Indiana Jones to discover the secrets of this once-hidden treasure. 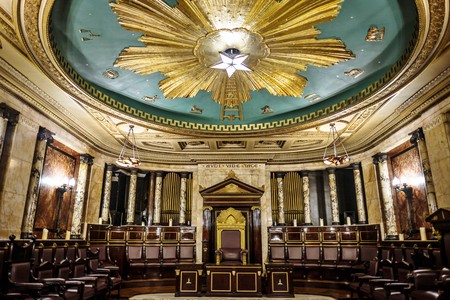 Beyond the plush lobby of the Andaz Hotel in a very expensive part of East London, you’ll find a set of winding stairs and seemingly out-of-place wooden corridors. Venture deeper and you’ll enter a mahogany antechamber with a heavy set of doors at the other end.

Like many of the larger train stations in London at the end of the 19th century, The Great Eastern Railway Company owned Liverpool Street Station and had a grand hotel built adjacent to it for the convenience of commuters. Prior to that, the site of both the station and hotel was used to house the patients of Bethlem Royal Hospital, the first such European institution for people suffering from mental illness. The notorious building went on to be known as ‘Bedlam’ and would subsequently move to different locations across London.

In 1912, centuries after the hospital was demolished and almost 30 years after the hotel first opened its doors, expensive enhancements were added to the building. The main phase of development was the introduction of a £50,000 Grecian Masonic temple – the equivalent of nearly £4m today. It might seem like a bizarre upgrade to a hotel now, but at the time many prominent members of society would have been Freemasons – exactly the kind of people who would be travelling up and down the country by rail. In fact, there was another Masonic temple – this time in the Egyptian style – also built at the hotel around the same time. 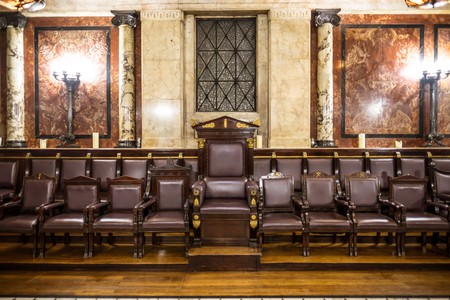 Brought back to its former glory, the Masonic Temple at Andaz London is a unique space steeped in history | © Courtesy of Andaz Hotel

By the postwar era, the transport industry was changing rapidly, and rail travel was marginalised by the mass use of motor vehicles. Liverpool Street Station was now predominantly used by city commuters going short distances in and out of London on a daily basis. With little need for overnight lodgings, the hotel also saw a downturn in fortunes. As ownership of the building changed hands, some original features were destroyed and others boarded up, seemingly hidden away forever.

The romanticised version of events is that the Masonic Temple had been laying dormant, accidentally forgotten and then miraculously rediscovered decades later by workmen. In reality, the hotel was only closed for four years from 1996, and the temple itself would have been in use for most of the period since it was built. The real surprise is that the temple has been incredibly well preserved for all these years, with its temporary “hidden” status potentially saving it from being converted into a more functional meeting room or similar practical hotel facility. The Egyptian Temple wasn’t so lucky… it’s now part of the hotel’s gym room.

The remaining temple is a vast and imposing space, covered in cold marble and dark wood. It’s the perfect environment for candlelit film screenings – something Andaz London had in mind when creating Temple Cinema, a monthly event showing horror movie classics.

Though the hotel today is a popular five-star destination and Liverpool Street one of the most desired addresses in London, the Masonic Temple-turned-cinema is an enduring symbol of the area’s macabre past: this part of London was the scene of the gruesome murders committed by serial killer Jack the Ripper, and Bram Stoker mentioned the old Great Eastern Hotel in his 1897 novel Dracula.

The current series of films at the cinema are coming to an end, but there are plans for it to return in the future with the space continuing to host events throughout the year.