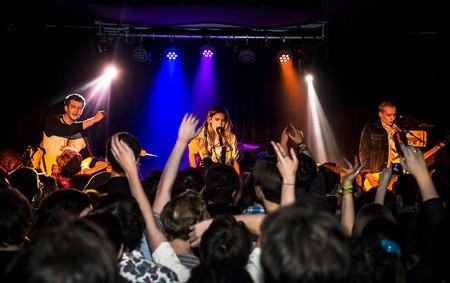 From 2005 to 2015, the number of clubs and live music venues in the UK almost halved. After a steady stream of closures, London is now left with only 88 live music venues in total, a shockingly small number for one of the music capitals of the world. With it more important than ever to champion independent venues — which have provided a vital lifeline in the careers of some of our most celebrated artists — Culture Trip takes a look at eight of the city’s best.

If there was ever a venue that proved true the old maxim, ‘never judge a book by its cover’, The Windmill is it. Though this little back-street pub couldn’t look more unassuming if it tried, its reputation as a champion of great music, and a great place to catch a live gig stretches far and wide. The Windmill has been a lot of things in its lifetime, from Irish tavern to biker hangout and even poet’s corner, and eventually morphing into a music venue in the early 2000s simply by chance, when somebody realised that its regular crowd possessed a wealth of skills in areas such as sound engineering, promotion, and music production. Since then the bar has been roundly named as one of the best live music venues not only in London but in the country, thanks to the quality of its bands, cheap prices, and relaxed atmosphere. Biffy Clyro, Plan B, The War On Drugs, Jamie T, and Bloc Party have all played here.

@windmillbrixton – possibly not the most stylish building in South London – but definitely one of its greatest music venues.

A favourite of the late Amy Winehouse, who could often be caught serving pints behind the bar, Dublin Castle has courted an outstanding reputation as a live music venue since the 1970s, when the band Madness secured a residency there — though they had to pretend to be a blues band just to get their first gig, having been turned down previously. The pub, which was a mainstay of the 90s Britpop movement, has been run by the same family for nearly 30 years, and is a self proclaimed ‘indie rock institution’, rather than just another music venue. The pub, which is a great one in its own right, hosts four live bands per night, with Blur, The Arctic Monkeys, Supergrass, Billy Bragg, and The Killers having performed in the past. 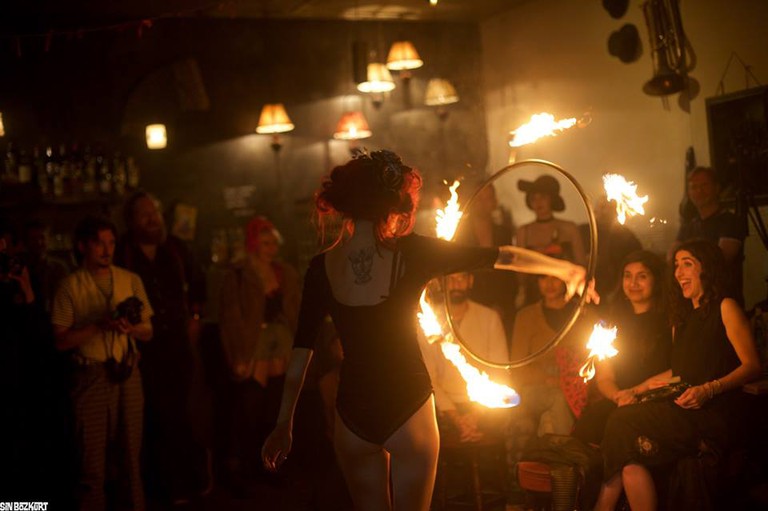 Luce Lemons at Jamboree | ©Sin Bozkurt/Jamboree
Sitting at the tail end of East London’s famous Cable Street, pocket-sized Jamboree looks more like your grandmother’s snug than happening music venue. Rickety tables, battered armchairs, and bric-a-brac oddities make up the mismatched collection of furniture which is arranged haphazardly in this Parisian-esque den. Housed in a former sweet factory beneath a cluster of artist’s studios, Jamboree really is a bohemian’s wet dream. Musicians from all over the world and every genre perform on Jamboree’s little curtained stage. Luce Lemons at Jamboree| ©Sin Bozkurt/Jamboree
Open In Google Maps
566 Cable St, London, E1W 3HB, United Kingdom
+442077915659
Visit Facebook page
Give us feedback

There’s two sides to quirky Hoxton Square haunt, Zigfrid von Underbelly, in both name and nature. The Zigfrid part is the upstairs venue, a DJ-centric, juke-boxing diner and bar, home to Hoxton Square Craft Beer and a mad, colourful jumble of furniture and assorted bits and bobs, including rocking horses, bicycles, surfboards, and a totem pole. Downstairs, Underbelly has the gig side of the operation covered, hosting renowned national and international acts alongside up-and-comers. 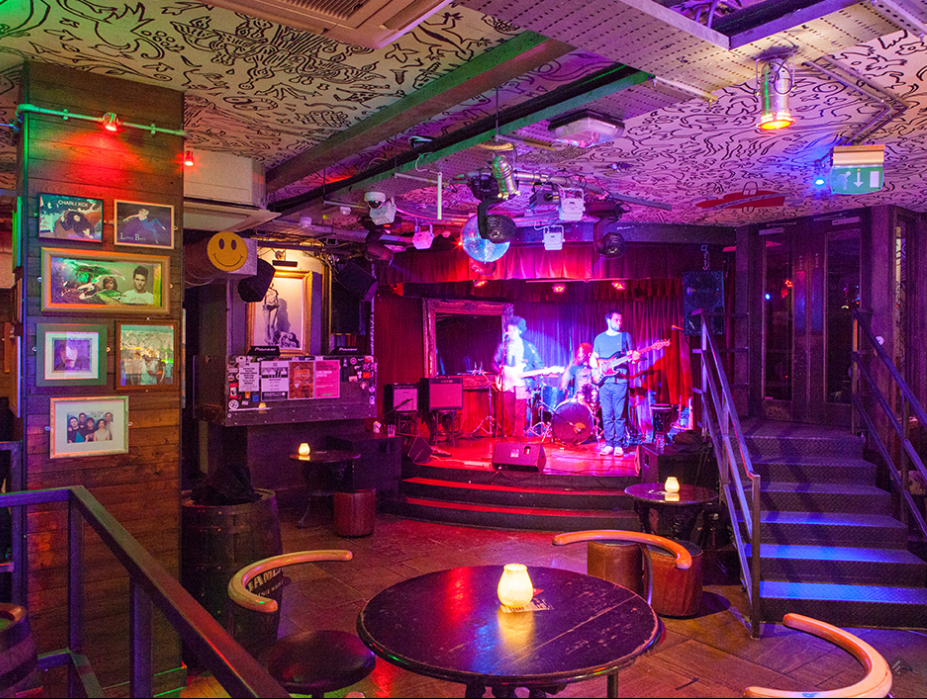 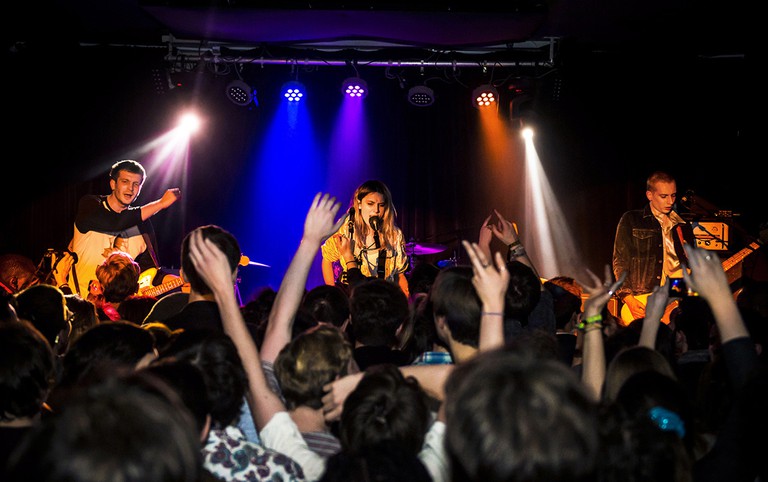 Wolf Alice play at Nambucca, Holloway | ©Will Ireland/Nambucca
When Nambucca burned to the ground in 2008, grief-stricken indie-lovers flooded the streets of North London with their tears. One of the area’s most celebrated live music venues, Nambucca is the kind of ample one-room pub/club that seems like it would be more at home in neighbouring Camden. Having established itself at the heart of a satellite subscene that struck out away from its cultural homeland, Nambucca brings a much-needed dose of music culture to under-loved Archway, and played an important role in the nu-folk scene of the mid-2000s onwards. Indie-rock band The Holloways formed at Nambucca and lived above it, with many local and upcoming bands using it not just as a performance space but as the base of their operation, rehearsing and storing their equipment there. After a post-fire refurbishment, Nambucca closed yet again in 2014 for a major image overhaul. Since then it has hosted the likes of Wolf Alice, The Wombats, The Enemy, and Fat White Family, who join the likes of past alumni such as The Kooks and Frank Turner. Wolf Alice play at Nambucca, Holloway |©Will Ireland/Nambucca
Open In Google Maps
596 Holloway Road, Archway, London, England, N7 6LB, United Kingdom
+442075610815
Give us feedback 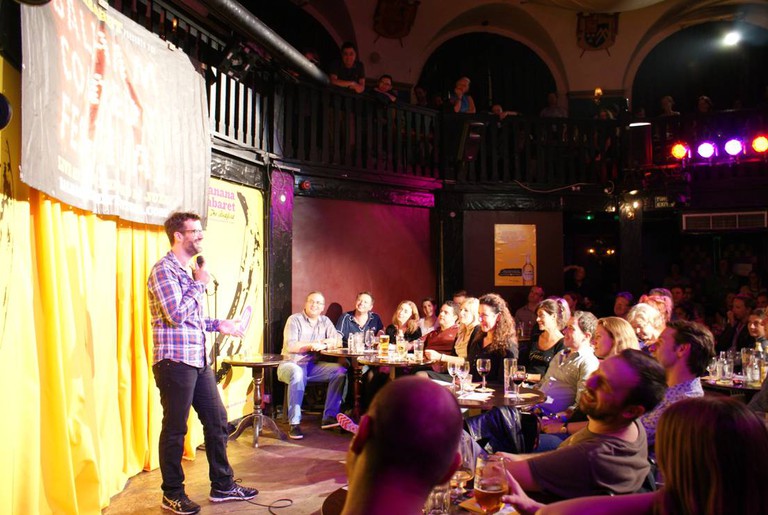 The Bedford, London | Image courtesy of The Bedford
Housed in a Grade-II-listed Georgian hotel, The Bedford is a multi-faceted venue, a haven not only for music but for comedy, dance, and general entertainment as well. But on the music side, The Bedford’s CV is pretty knock out — having served as a spit and sawdust venue in the 60s and 70s, it had a hand in launching the careers of bands such as The Clash and U2. In subsequent years, they’ve also played a supporting role for artists like James Morrison, Paolo Nutini, and Newton Falkner, with Ed Sheeran recording his first album here in 2010. The Bedford’s live music nights take place four nights a week, 50 weeks per year. Image courtesy of The Bedford
Open In Google Maps
77 Bedford Hill, Balham, London, England, SW12 9HD, United Kingdom
+442039768007
Visit Website
Give us feedback

Nightclub, Bar, Pub Grub, British, $$$
Facebook
Email
Twitter
Pinterest
Copy link
Share
Map View
A unique venue in upscale West London, this understated basement venue complete with concrete floors is praised by punters for ‘keeping it real’ amongst stuffy surroundings. Courtney Love and Mick Jones of The Clash have given guest DJ sets in the past, while regular nights feature live performances in a range of genres, from indie bands to reggae and hip hop to punk, as well as some niche club nights. Notting Hill Arts Club has given a platform to artists such as Lily Allen and La Roux in their early days. Aside from being a staple of the music scene, it also offers a programme of film, art, and theatre.
Open In Google Maps
21 Notting Hill Gate, Kensington, London, England, W11 3JQ, United Kingdom
+442074604459
Visit Website
Give us feedback 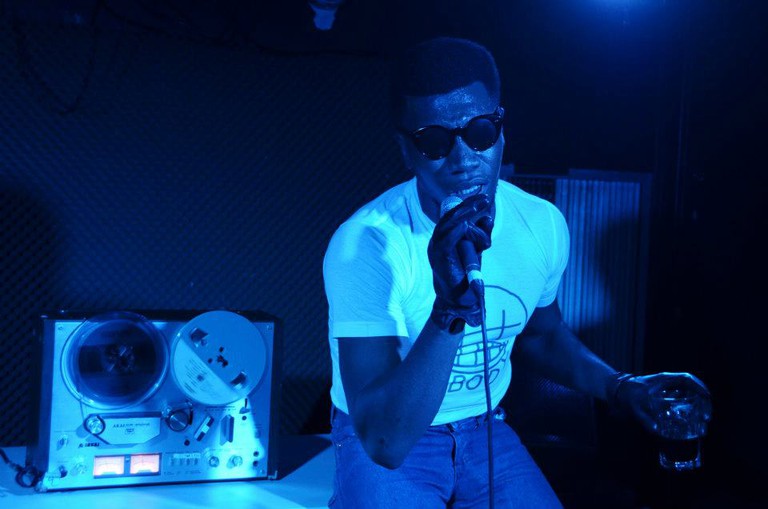 Sebright Arms, London | Courtesy of the Sebright Arms
Tucked away down a narrow passageway off of Hackney Road, the Sebright Arms is all too easy to miss for those not in the know. With an old-fashioned-looking pub upstairs (but serving up the niche beer brands and gluten-free street-style foods you’d expect from this always cool corner of London) and an intimate music venue in the basement hosting cheap-as-chips gigs from acts that will soon be worth a pretty penny, the Sebright is treasured by its patrons — as proved by the reaction to its near demolition in 2009. The Sebright was a well-known heavy-metal hotspot in the 70s, a disco-pub in the 80s, a cabaret bar popular with drag acts in the 90s, and now tends to favour indie-bands. Some well-known acts who made early appearances here include Catfish and the Bottlemen, Charli XCX, East India Youth, and Courtney Barnett. Courtesy of the Sebright Arms
Open In Google Maps
31-35 Coate Street, London, England, E2 9AG, United Kingdom
+442077290937
Visit Website
Give us feedback
Give us feedback