London's Top 10 Films Of The Past Decade 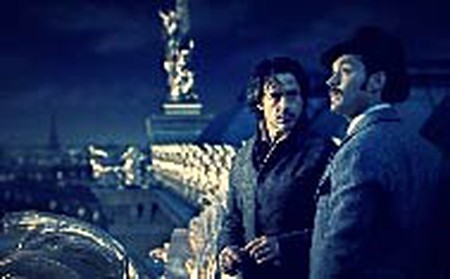 London is the ultimate locale for the ‘gritty’ underground scene in independent cinema, but it is also the stage for big-budget films geared towards a more mainstream audience. This list incorporates a little bit of both cinematic movements; from the staggering shots of the Millennium Bridge in Harry Potter and the Half-Blood Prince to the dingy underbelly in Somers Town, these films cover the best that London has to offer.

Based on the Alan Moore graphic novel of the same name, V for Vendetta is a clear riff on the Orwellian1984 tradition. The film is uniquely British, conflating elements of history, literature, and culture into one radical future. A totalitarian government has seized power and brainwashed its citizens into obedience until one man, a shadowy freedom-fighter called V, swears vengeance against corruption. His assistant Natalie Portman delivers a superior performance as a tortured prisoner who in many ways resembles a Holocaust victim. As V seeks his revenge we are forced to consider whether violence can be used as a means for justice.

An ensemble-cast film can either prove to be a monumental failure or a soaring success (as far as quality rather than just at the box office) – Children of Men is an example of the latter. Clive Owen plays protagonist Theo in the year 2027, a future that is Orwellian in essence and post-apocalyptic in nature. All women have become mysteriously infertile and London has dissolved into violent factions. So when Theo is drafted by his ex, Julianne Moore, to transport a pregnant refugee to a group of fertility scientists at sea, he puts his life and the life of his loved ones at risk. The plot falls dangerously close to a cliché thriller but the incredibly skilled Alfonso Cuarón pulls it off with grace and, remarkably, almost no special effects.

Eastern Promises (2007) is a taut thriller that centres around a Russian teenager in London who dies in childbirth. Her nurse, Naomi Watts, discovers a diary she has left behind and has it translated only to realize that the young girl was raped by a member of the Russian mob – Watts soon becomes embroiled in a much larger crime network. David Cronenberg, a master of horror, infuses the film with grotesque imagery while broadening his scope to investigate the basic human condition; his favored lead Viggo Mortenson is also brilliant as a member of the mob.

Shot entirely in black and white, Somers Town is phenomenal thanks to the cinematography alone, but the plot happens to be refreshing and heart-warming as well. Tomo is on the run in London until he meets a Polish immigrant, Marek, from Somers Town and the two form an unorthodox friendship. Director Shane Meadows, best known for This Is England, meanders through the streets of London with playful camerawork and a keen eye for beauty.

Happy-Go-Lucky (2008) is a day in the life of our heroine, Poppy Cross, played by Sally Hawkins. A primary schoolteacher in Northern London brimming with exuberance and cheerfulness, Poppy often grates on her less than optimistic peers. Clad in clashing vintage clothing and a personality so quirky she would make your indie dream-girl hang up her Docs and turn in her polka dotted knee-highs – Hawkins plays a truly unique and inspiring woman over 30 who will leave you smiling every time you watch this film.

An Education (2009) follows a teenage whiz-kid in 1960’s suburban London who is on track to Oxford, but her trajectory is interrupted by a charming con-artist who introduces her to a life of culture and art. The acting overall is subtle and well-executed and the brains behind this film are nothing to scoff at either. Nick Hornby, writer of About a Boy, serves up another first-rate screenplay that walks the tightrope between drama and dry humour. Danish female filmmaker Lone Scherfig is a lively spark in the boys’ club of modern cinema and we can only hope to see more from this talented individual.

Harry Potter and the Half-Blood Prince

We do not need to point out the magnitude of success that the Harry Potter series has garnered over the years. What is interesting to note, however, is how the films incorporate London landmarks such as the Millennium Bridge in Harry Potter and the Half-Blood Prince (2009), a sequence that took several months to create. Ominous clouds roll over London as misty grim-reaper figures (Death-Eaters) descend on the CGI-replicated bridge and spiral around the cables until it collapses into the river. The verisimilitude of the bridge is astounding and the dark atmosphere sets the tone for the rest of the film, which is quite unlike the cheery entrance onto ‘Platform 9 and ¾’ at King’s Cross at the outset of the series.

As a British institution Sherlock Holmes is a difficult name to render novel, but Guy Ritchie succeeds admirably in his 2009 film adaptation Sherlock Holmes. Robert Downey Jr. leaps out from the shadow of old Sherlocks and delivers the reinterpreted character with charm and bravado. He also has perfect chemistry with Jude Law as the sarcastic and taciturn Watson, and Ritchie plays out their partnership in the grittiness of Victorian London to tie the whole aesthetic together. Even the sequel A Game of Shadows is well-worth a watch!

Attack the Block(2011) comes from debut director Joe Cornish who was involved in the Shaun of the Dead trilogy, elements of which translate into the film. This hybrid-genre piece opens with a group of young boys robbing a nurse in a South London complex when an otherworldly creature suddenly attacks the group. As aliens continue to invade, the gang joins forces with their former victims to protect their turf. What would normally be a social realist commentary is radically altered by a light-hearted tone and outlandish humour. A group of multicultural boys take centre stage and never step out of the limelight, just one of a plethora of elements that make Attack the Block so refreshing and delightful to watch.