The Best Delis and Food Halls in London 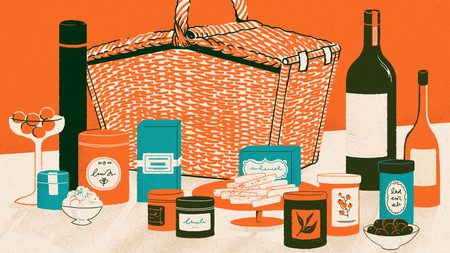 With gourmet food halls at some of the world’s most famous department stores, including Harrods and Selfridges, and small delis and food shops offering everything from fresh seasonal produce to hard-to-find Polish fare, London is a must-visit destination for any discerning foodie. Read on to discover Culture Trip’s best food shops and delis in the capital.

Nestled in an old Victorian railway arch in Bermondsey, The Ham and Cheese Co. does exactly what it says on the tin – sells a delicious and unique range of charcuterie and cheeses sourced directly from farmers and butchers across Italy and France’s southwest. Guided by the principles of taste, tradition and authenticity, the shop premises feature their own maturing rooms and are surrounded by like-minded artisanal companies like the Monmouth Coffee Company and micro-brewery Brew by Numbers. The Ham and Cheese Co. product line includes the moist and tender Jesus du Pays Basque salami, flavoured with rum and peppercorn, and Brebis Fermier, a sheep’s milk from the Pyrénées-Atlantique village Lescun, alongside accompaniments like untreated Bella di Cerignola olives and vegetable pickles. 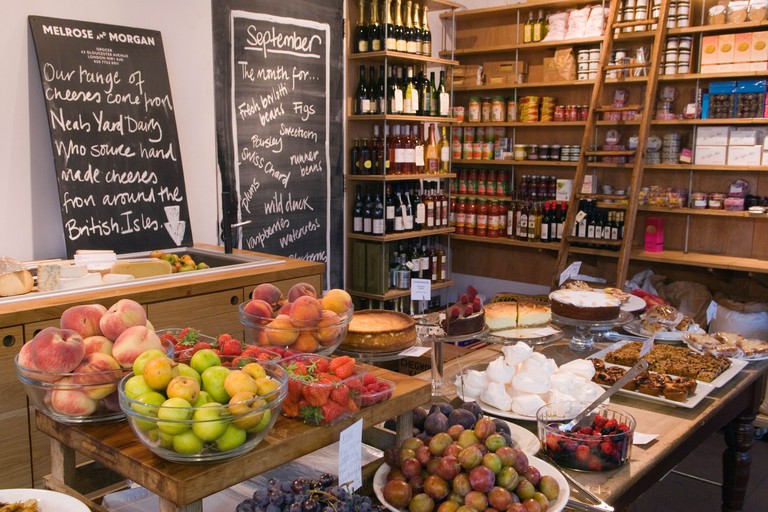 Melrose and Morgan Deli | © Homer Sykes / Alamy Stock Photo
Melrose and Morgan is a grocery shop and kitchen run by a team with a passion for food offering artisan products, ingredients and freshly prepared dishes and snacks. The company has two shops – the original, which opened in Primrose Hill in 2004, and a sister shop in Hampstead, established in 2010 – and each features a café area where guests can enjoy a snack and drink. Melrose and Morgan firmly believe in using produce grown or reared in Britain wherever possible and their menu features in-season recipes with the majority of products made in-house by the kitchen’s chefs. Expect rustic snacks like savoury scone with onion marmalade, rocket and cream cheese or spinach and watercress soup sit alongside a range of produce including handmade chocolates, organic meats and preserves.
Open In Google Maps
42 Gloucester Avenue, Camden Town, London, NW1 8JD, United Kingdom
+442077220011
Give us feedback 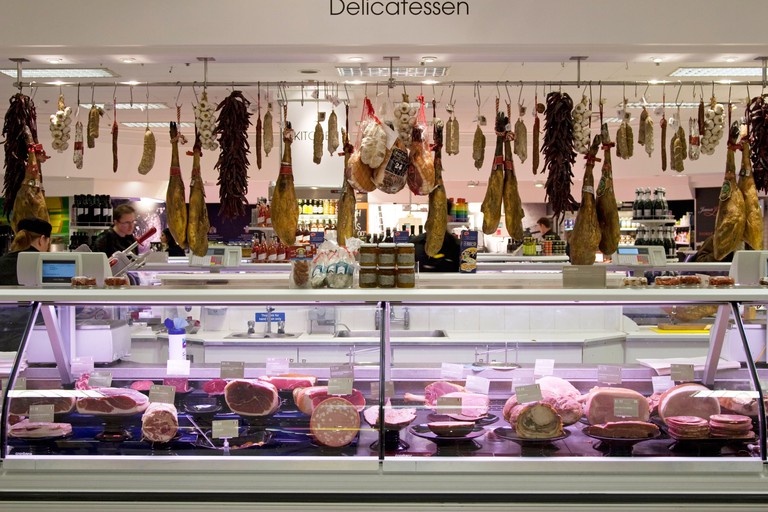 Selfridge's Food Hall, London | © British Retail Photography / Alamy Stock Photo
Since its opening by American entrepreneur Harry Gordon Selfridge in 1909, Selfridges has become a London landmark and is widely regarded as the first and finest example of a modern department store. Selfridges Food Hall has become equally renowned in its own right, famed for the sheer range of delicacies and delights on offer which includes everything from delicious handcrafted cupcakes from Lola’s Kitchen, to award-winning gelato from Oddono’s, which is made locally in South Kensington, and Selfridges’ own Champagne and Oyster Bar where visitors can indulge in rock oysters sourced from across the British Isles with a glass of bubbly. Other goods like oils, vinegars, marinades and wines are available from a range of luxury brands, and the Food Hall even features its own chocolate library, newly launched in 2014, which is home to over 250 different types of chocolate.
Open In Google Maps
400 Oxford Street, London, W1A 1AB, United Kingdom
+800123400
Give us feedback 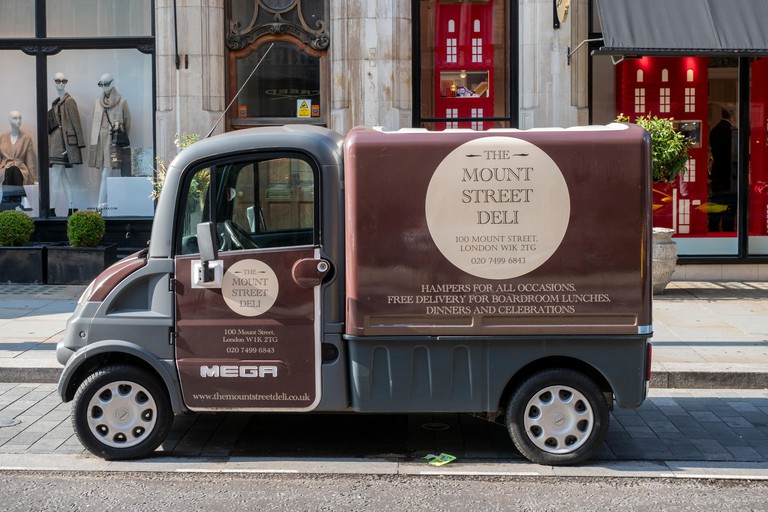 Delivery Van for the Mount Street Deli | © Chris Lawrence / Alamy Stock Photo
The Mount Street Deli is an upscale, chic deli and coffee shop in Mayfair that offers a mouth-watering range of breakfast items and daily specials made from ingredients sourced primarily from within the British Isles. The deli serves up freshly baked viennoiserie and cakes daily, such as its signature recipe carrot cake, along with a range of salads, soups and meat dishes served with hot drinks from London-based roaster Volcano Coffee Works. Guests can choose to dine in Mount Street Deli’s cosy interior or outside on its terrace and during the summer months, the deli offers a number of summer hampers and picnic perfect for a lazy summer’s day in the park.
Open In Google Maps
100 Mount street, Mayfair, London, W1K 2TG, United Kingdom
+442074996829
Visit Website
Give us feedback

Cafe, Coffee Shop, Polish, British, $$$
Facebook
Email
Twitter
Pinterest
Copy link
Share
Map View
The Southbank’s new café and bar, Topolski is located just minutes from the Thames and resides in the former gallery of the late renowned Polish-born painter Feliks Topolski. It was here that he, between 1953 and 1979, created his Topolski Chronicles, an illustrated archive of momentous world events and icons like Winston Churchill and HG Wells. Topolski’s art still adorns the café’s walls, and in homage to the artist’s roots, its menu features Polish-influenced dishes like the salt beef sandwich with cheese and pickle or the baked mackerel with fennel radish salad and a lemon chive dressing, alongside hearty cheese and meat boards perfect for sharing. Each evening between 6pm-7pm, Topolski holds it Kanapki Klub featuring free kanapki, or sandwiches, as they’re known in English.
Open In Google Maps
150-152 Concert Hall Approach, London, SE1 8XU, United Kingdom
+442076200627
Give us feedback 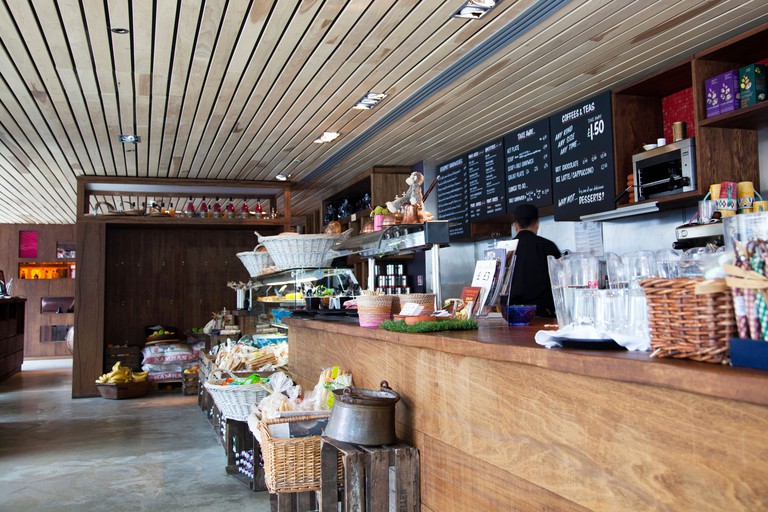 Del'Aziz | © M.Sobreira / Alamy Stock Photo
For flavoursome eastern Mediterranean deli fare in a vibrant, lively atmosphere look no further than the Bankside branch of Del’Aziz. The deli, which has four other branches including premises in Bermondsey and Fulham, offers cold and warm meze dishes like baba ganoush, falafel and grilled Merguez sausages, alongside a number of heartier dishes like the Persian koobideh lamb, a minced lamb dish spiced with garlic and sumac, tagines and an aubergine and mozzarella bake. Del’Aziz also serves freshly brewed Turkish coffee and Moroccan mint tea, and offers an additional selection of 28 artisan teas. Its location within Southwark Street’s Blue Fin Building, designed by award-winning architect firm Allies and Morrison, is just behind the Tate Modern, making it perfect for post-exhibition drinks and snacks.
Open In Google Maps
5 Canvey St, London, SE1 9AN, United Kingdom
+442076330033
Give us feedback 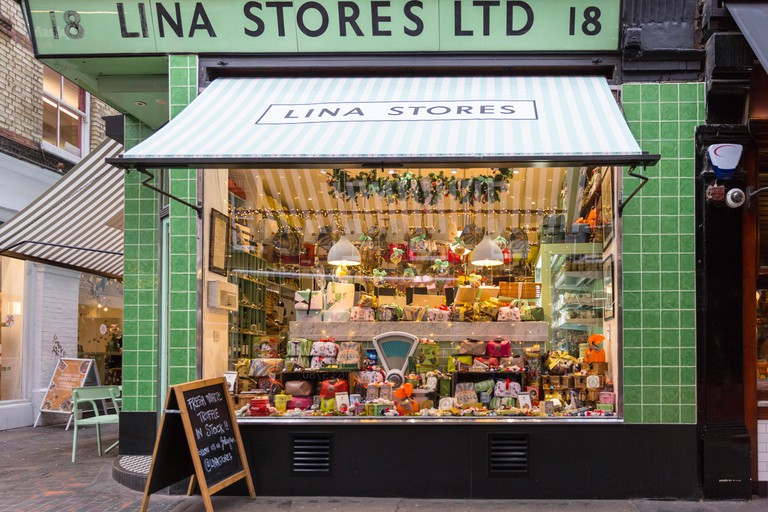 Lina Stores Ltd, old fashioned deli shop in Brewer Street, London | © Imageplotter / Alamy Stock Photo
A historical Italian delicatessen based in Soho, Lina Stores was established in 1944 and for the past 70 years has imported a varied range of meats, dried pastas, cheeses and wines – to name but a few – directly from Italy. The charming little deli also sells classic antipasti like Puglia olives and sun-dried tomatoes, alongside those often hard-to-find items such as sweet garlic and Lilliput caper in champagne vinegar. Lina Stores is widely known for its fresh pasta and sausages, which are made daily in the in-store kitchen: its fresh egg pasta, made using whole eggs and double zero Italian flour, focuses on filled pastas like ravioli and tortellini, and features signature fillings like pumpkin or veal, while the homemade sausages are prepared with pork belly and shoulder, and flavoured with fennel seed and Lina’s special blend of herbs and spices.
Open In Google Maps
18 Brewer Street, West End, London, England, W1F 0SH, United Kingdom
+442074376482
Visit Website
Give us feedback 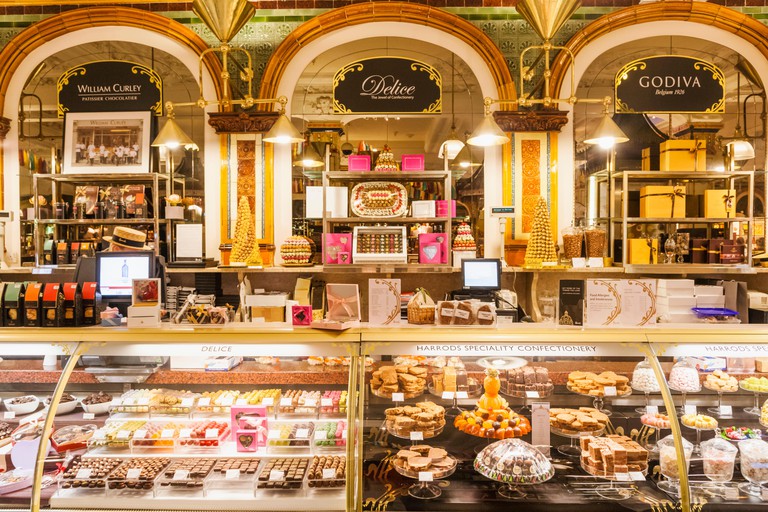 Harrods Food Hall, London | © Prisma by Dukas Presseagentur GmbH / Alamy Stock Photo
The world-famous Harrods department store and its equally well-known Food Hall have been a London shopping destination since the store’s establishment in 1834 as a grocery and tea shop by Charles Henry Harrod in East London. The Harrods we know today in its iconic building on Brompton Road was designed by local architect Alfred Williams and was built in 1884. Harrods Food Hall, expanded to house seven halls and officially unveiled in 1982 by HRH Princess Anne, features the store’s original and restored tiling. This stunning setting is home to a boulangerie, patisserie, fromagerie and charcuterie and several eateries including chef Galvin Demoiselle’s Petit Bistro. Pick up one of Harrods luxury hampers, like the ‘building hamper’, which includes Harrods brand wines, teas and coffees, preserves, and chocolates.
Open In Google Maps
87 – 135 Brompton Road, Knightsbridge, London, SW1X 7XL, United Kingdom
Give us feedback 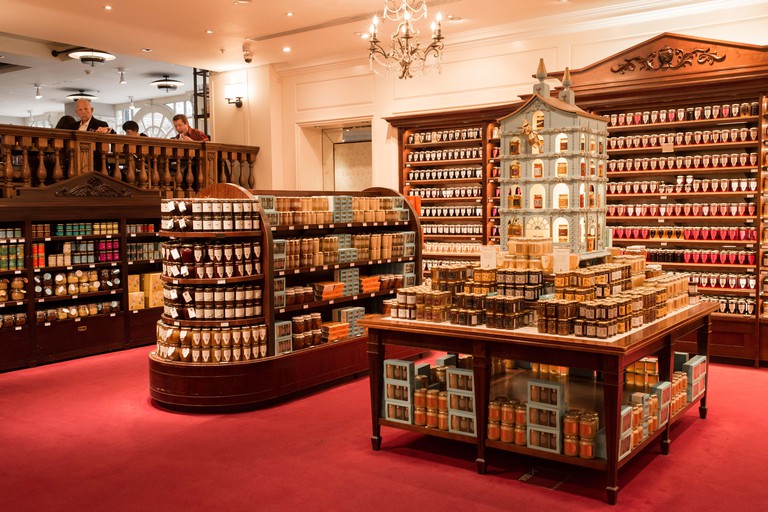 Fortnum and Mason | © Nicola Ferrari / Alamy Stock Photo
Originally founded as a grocery store in 1707 by William Fortnum and Hugh Mason, Fortnum and Mason evolved into a department store and in its 300-plus years of operation has become an iconic British brand. Fortnum’s lower ground floor is home to its famous Food Hall which sells a range of items including fresh fruit and vegetables, cheeses, charcuterie and meats, and the 1707 Wine Bar where shoppers can try a bottle of wine from Fortnum’s wine department with dishes made with ingredients from the Food Hall. The ground floor features Fortnum’s signature hampers and renowned teas alongside patisserie and confectionery items, as well as The Gallery restaurant’s seasonal menu and luxury brasserie The Fountain. Upstairs, the first floor is home to Fortnum’s demonstration kitchen and The Parlour, which sells ice creams, coffees and sandwiches.
Open In Google Maps
181 Piccadilly, St. James's, London, W1A 1ER, United Kingdom
+442077348040
Give us feedback
Give us feedback