Literary Landmarks To Visit In London 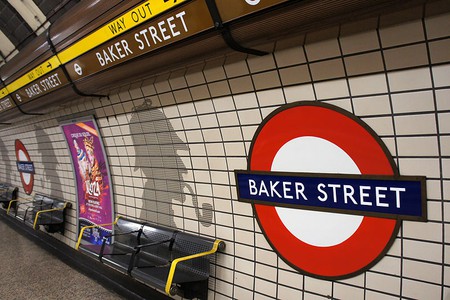 Many of history’s greatest writers once called themselves Londoners; living, working, and socialising among the city’s historic streets, they are the figures behind some of the most inspired, creative, and poetic works in British literature. Walk the cobbles they once walked, drink in the pubs in which they formed their ideas, or pay your respects at their final resting places, with our guide to the best of London’s literary landmarks.

Starting with the most obvious, Shakespeare’s Globe Theatre on Bankside is perhaps the most famous of London’s literary landmarks — and among its most famous buildings. Fashioned in an entirely authentic manner (save for some modern health and safety requirements) and opening in 1997, today’s Globe Theatre is the third incarnation, and aims to replicate the original theatre of Shakespeare’s day — from which it stands only about 200 metres away — which burned down in 1599 before being rebuilt and demolished later in the century. Plays are staged in the theatre throughout the year — in the traditional outdoor space in the summer, and inside in the Sam Wanamaker Playhouse during winter — while tours of the theatre and entrance to the Shakespeare exhibition operate year round. 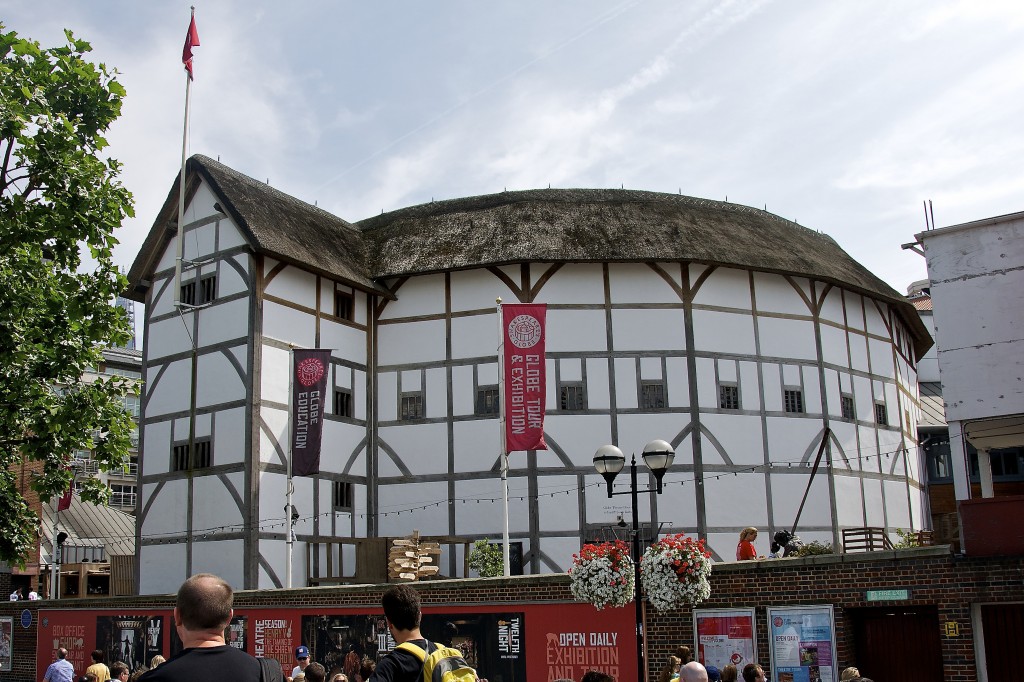 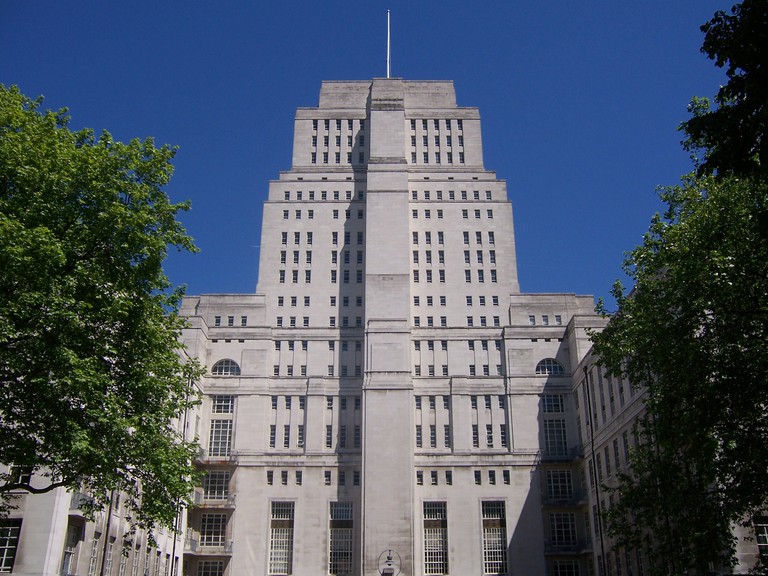 Senate House Library | © An Siarach/Wiki Commons
Senate House Library is a mecca for booklovers for obvious reasons — the central library for University of London students, the 14-floor space is home to around 3,000,000 works. However, a lesser known fact concerns the art deco building in which the library is housed; the enormous, white, pyramid-shaped building was actually the inspiration for the cryptic Ministry of Truth in George Orwell’s 1984, in which the State’s propagandic and censoring activities are carried out. The building itself is also used in Michael Radford’s 1984 film adaption of the novel.
Open In Google Maps
Malet Street, Bloomsbury, London, England, WC1E 7HU, United Kingdom
+442078628500
Visit Website
Visit Facebook page
Give us feedback

Church, Memorial
Facebook
Email
Twitter
Pinterest
Copy link
Share
Map View
In the year 1400, stalwart of English literature, Geoffrey Chaucer, was interred in Westminster Abbey. Though not initially buried there in recognition of his literary prowess, his body was transferred to an enormous tomb a century and a half later by a literature lover, and was soon followed by the burial of Edmund Spenser, author of the epic poem The Faerie Queen, in 1599. A tradition was then born, and over the years this corner of the Abbey has become the final resting place for some of the country’s most esteemed authors, poets, and playwrights, while others are commemorated by memorial floor stones. Famous names to be found here include Alfred Tennyson, Robert Browning, Charles Dickens, Rudyard Kipling, Jane Austen, the Brontes, and William Shakespeare, among many others. Meanwhile, other famous figures, including Aphra Behn — first professional woman writer — are buried elsewhere in the abbey.
Open In Google Maps
20 Dean’s Yard, Westminster, London, England, SW1P 3PA, United Kingdom
+442072225152
Visit Website
Give us feedback

Pub, Pub Grub
Facebook
Email
Twitter
Pinterest
Copy link
Share
Map View
London has no shortage of pubs with a strong association with the literary and artistic world — places where our greatest writers and thinkers have met to socialise, share ideas, and hash out their views. Fitzrovia itself has a strong historical reputation as a bohemian enclave; from the 1920s through to the 1950s in particular, it was a hotspot for artistic circles, and home to the likes of Virginia Woolf, George Bernard Shaw, and Arthur Rimbaud. The Fitzroy Tavern, which is believed to have given the area its name, became the local drinking den for these bohemian types, and was known to be frequented by George Orwell and Dylan Thomas.
Open In Google Maps
The Fitzroy Tavern, 16A Charlotte Street, Fitzrovia, London, England, W1T 2LY, United Kingdom
Give us feedback

Peckham Rye is perhaps not one of the first places that comes to mind when speaking of the city’s literary history. The grassy space and eponymous road was, of course, immortalised in Muriel Spark’s 1960 novel, The Ballad of Peckham Rye. However, its literary associations go back way beyond this; it was here, some 200 years prior, that seminal romantic poet William Blake claimed to have had one of his first celestial encounters. When walking on the Rye at the age of ten, Blake recalled coming across an oak tree ‘filled with angels, bright angelic wings bespangling every bough like stars’, with visions forming a large part of his creative process for the remainder of his life. Today, there is a mural on Goose Green, commissioned by the 1993 Dulwich Festival, commemorating Blake’s encounter, while in 2011 Peckham artist John Hartley replanted Blake’s famous angel oak on the Common, using a rescued oak sapling.

It's a famous local legend that William Blake had a vision of angels on Peckham Rye. This mural was painted by Stan Peskett for the Dulwich Festival in 1993. Unfortunately it has been tagged by little shits numerous times, but each time restored to its former glory 👼🏼 #ilovelondon

Shop, Store, School
Facebook
Email
Twitter
Pinterest
Copy link
Share
Map View
This incongruously characterful shoe shop squeezed between the modern buildings of the London School of Economics dates back to the 16th century; it is considered to be the oldest shop in Central London, surviving the devastating Great Fire of 1666 that flattened much else in the area. Although the shop only assumed its current name after the release of Charles Dickens’ best-selling 1840 novel of the same name, it is believed to have been the inspiration behind Nell and her grandfather’s famous home. Take a look around, and decide for yourself.
Open In Google Maps
2es, 13-14 Portsmouth Street, Holborn, London, England, WC2A 2ES, United Kingdom
+442074059891
Visit Website
Give us feedback

Library, Museum
Facebook
Email
Twitter
Pinterest
Copy link
Share
Map View
Now a charming museum and research library, this period-feature-filled 17th-century townhouse tucked away in a square behind Fleet Street was once the home of renowned writer and lexicographer Samuel Johnson, who lived here from 1748 to 1759, as he composed his seminal text, A Dictionary of the English Language. A bronze statue of Dr. Johnson’s favourite cat, Hodge, sits at the bottom of the square, while the Ye Olde Cheshire Cheese pub — famous for its literary clientele and frequented by the man in question — sits just around the corner.
Open In Google Maps
17 Gough Square, Holborn, London, England, EC4A 3DE, United Kingdom
+442073533745
Visit Website
Visit Facebook page
Give us feedback 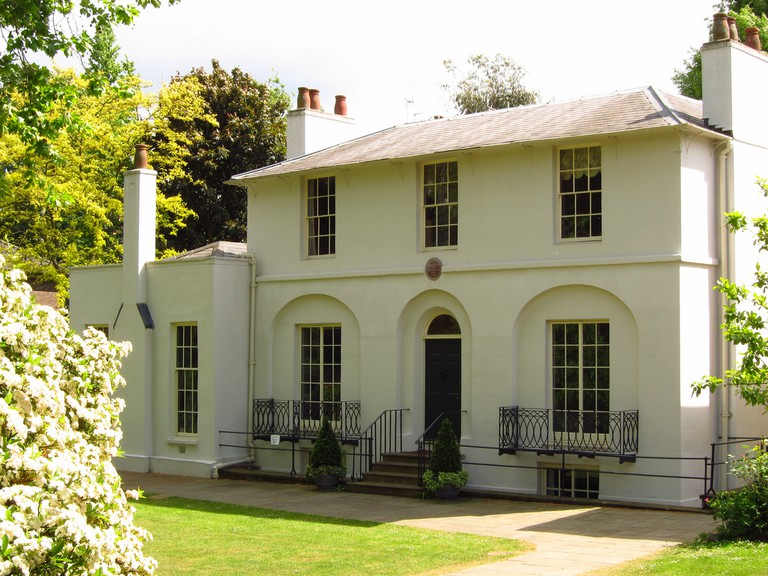 Keats House | ©Laura Nolte/Flickr
Found in leafy North Hampstead, this 18th-century villa was home to romantic poet John Keats from the years 1818 to 1820, the year before his tragic death at 25. These years — during which Keats fell in love with and got engaged to Fanny Brawne, who lived next door — are considered to be the poet’s most productive, and Charles Brown, the friend with whom he shared the house, recalls him writing Ode to a Nightingale beneath a plum tree in the garden. Today, Keats House is a museum dedicated to the poet and open to the public; it houses a sizeable collection of Keats’ works and letters, alongside the books, paintings, and objects he owned, in a changing programme of exhibitions.
Open In Google Maps
10 Keats Grove, Hampstead, London, England, NW3 2RR, United Kingdom
+442073323868
Visit Website
Give us feedback
Give us feedback