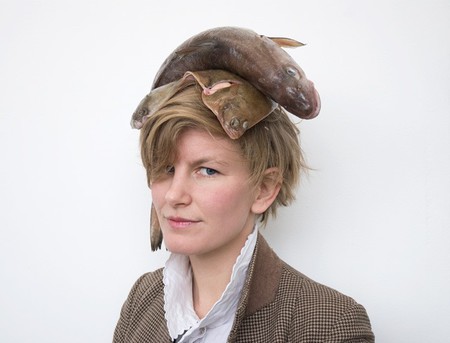 On December 2, 2013, French artist Laure Prouvost was named the winner of the prestigious Turner Prize. The triumphant artwork, Wantee, originally produced to accompany Tate’s Kurt Schwitters retrospective earlier in the year, was lauded for its layered meaning, peculiar sentimentality and creation of a deeply atmospheric environment.

The 2013 Turner Prize has been presented to French born, London based artist Laure Prouvost, marking the third instance in which a non-native Brit has won this coveted award. Her victorious work, which combines video projections and found objects in a strange yet affecting installation, was considered the underdog in the UK’s most prestigious fine art competition.

Held in Ebrington barracks in Derry-Londonderry, Northern Ireland, the 2013 UK city of culture, the exhibition is the first Turner Prize show to take place outside of England. Prouvost was shortlisted for the prize alongside the playful and provocative David Shrigley, the neo-conceptual Tino Sehgal and the decidedly more tame Lydia Tiadom-Boakye. The triumphant artist’s work was distinguished for its surprising poignancy and considerable complexity, uniting the various elements of the piece in an elegant narrative.

Screened as part of Tate’s Schwitters retrospective held earlier in the year, the work chronicles Prouvost’s fictitious grandfather, a great friend of Schwitters and a conceptual artist in his own right. From this context one can infer the meaning behind the work’s title. Entitled Wantee, the piece honours Schwitters’ companion Edith Thomas, who was given the unusual nickname for her repeated inquiry ‘want tea?’.

The viewer enters into a mostly darkened space featuring two separate video screens. A gentle light is cast over the clutter of ageing furniture and objects that fill the rest of the gallery, set there to tie the viewer’s physical environment into the on screen reality. In the first video the artist’s voice overlays footage taken in England’s lake district, the site of Schwitter’s third and final Merzbau and his ultimate death. She recounts the tale of this imagined grandfather, who spent the final years of his life in a similar lake district cottage, producing copious amounts of unusual pottery and attempting to dig a hole to Africa from the floor in his studio. The second video explores an invented grandmother’s perspective of the transpired events.

Humorous, strange and oddly touching, the installation weaves together fact and fiction in this quirky tribute to the elder artist. The work’s layering of elements, use of installation and moving image, rejection of conventional logic, and investigation of semiotic theory are all elements that the artist carries across her oeuvre.

In addition to the Turner Prize, Prouvost was granted the MaxMara Art Prize for Women in 2011 in conjunction with Whitechapel Gallery. Other recent exhibitions of the artist’s work have been held at the Collezione Maramotti in Reggio Emilia, Italy, Gallery TPW in Toronto, Canada, the Morra Greco Foundation in Naples and at the 2013 Lyon Biennial, among others.

The Turner Prize, named after the painter J.M.W. Turner was established in 1984 by the Tate gallery as an annual award granted to a contemporary British artist under 50. The 2014 Turner exhibition will return to London, before heading to Glasgow in 2015.