How to Be a Dark Tourist in London 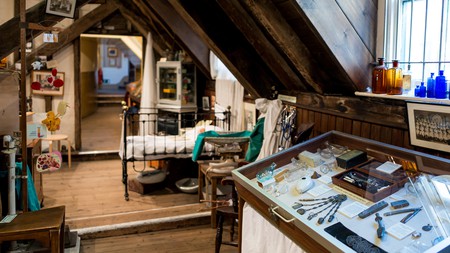 London may be marketed as the city of tea and biscuits, fish and chips and good-ol’ England charm, but the Big Smoke is so much more gripping once you get past that cheerio, pip-pip nonsense. After all, this is the home of Jack the Ripper, the Clink and the London Dungeons, with 2,000 years of horror in its annals. Kick Buckingham Palace to the kerb and tell Big Ben to shove off; these spots expose the real black heart of the capital.

Investigate murders in Whitechapel on a Jack the Ripper tour 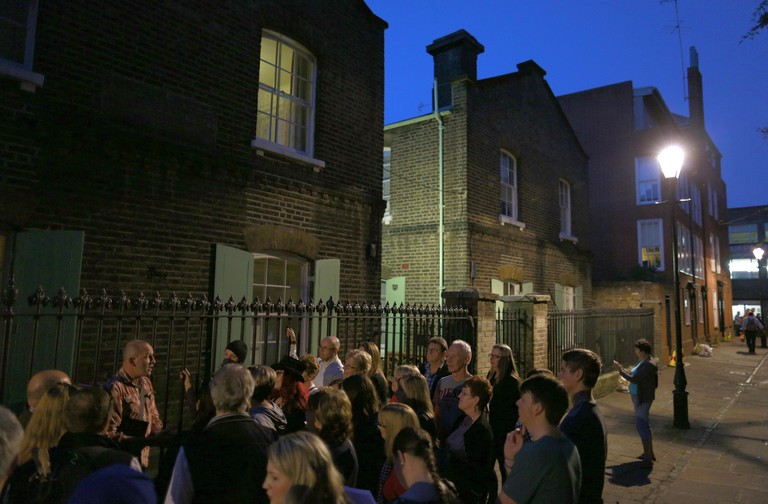 © ADRIAN DENNIS/AFP via Getty Images
During the blackened autumn of 1888, five Whitechapel women were murdered in the bloodiest of ways; their throats were cut, then their bodies hacked open. The man (or, possibly, men) behind the slaughters was never caught but, thanks to some savvy contemporary journalism, bears the immortal sobriquet of Jack the Ripper. Nearly 150 years later, you can retrace the Ripper’s footsteps on a dedicated East End tour. Visit the homes and murder sites of the victims, as your guide narrates grisly kill after grisly kill. Some even come with pictures. Joy abounds. 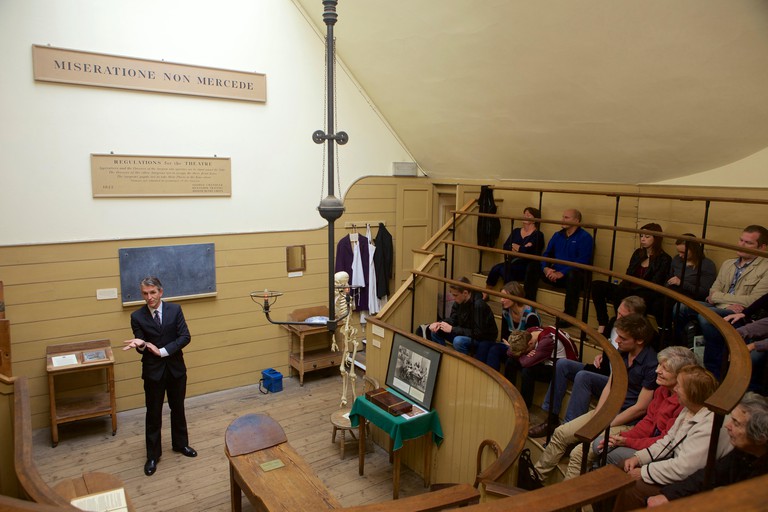 © Loop Images Ltd / Alamy Stock Photo
The Old Operating Theatre in Southwark lures you into a false sense of security. “Oh, this isn’t so bad,” you tell yourself as you enter a quaint-looking attic, meandering past herbs and tools once believed to herald medical miracles. Then you meet that hanging skeleton, its ribs deformed by a lifetime of wearing corsets. You read the diaries of patients that endured brain surgery without anaesthetic. You see, on the walls, looming diagrams of eye surgeries, scissors graphically piercing the whites. Hypochondriacs need not enter.

Visit the graves of Marx and more at Highgate Cemetery 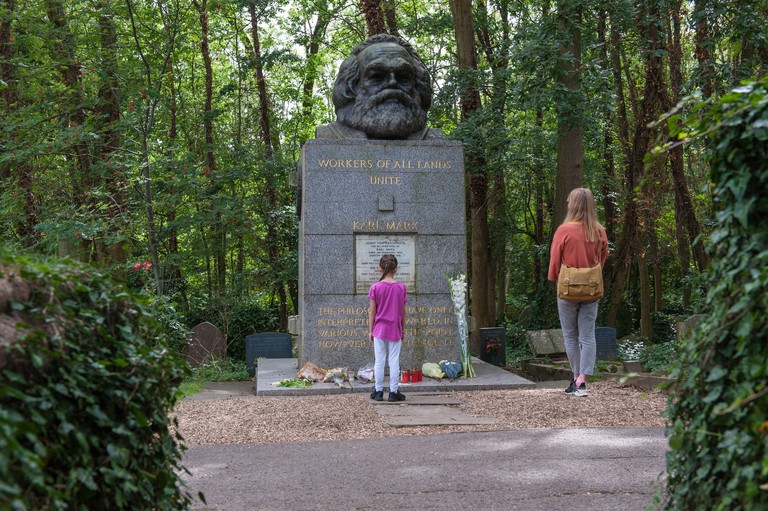 © andrea sabbadini / Alamy Stock Photo
Adam Smith is often credited as the inventor of capitalism. You can visit his grave for free in Canongate Kirkyard in Edinburgh. Karl Marx, socialist figurehead of Marxism, is buried in Highgate Cemetery. To see it, you must pay an entrance fee. Such irony isn’t the most unsettling thing about this North London graveyard, either. Highgate West especially is a morose wonderland, with Victorian tombstones and mausoleums tightly huddled for what seems like infinity. Rich and poor alike cram the cemetery: a humbling symbol that, well-off or not, we all end up in the same place.

Plunge into the dark depths of Chislehurst Caves 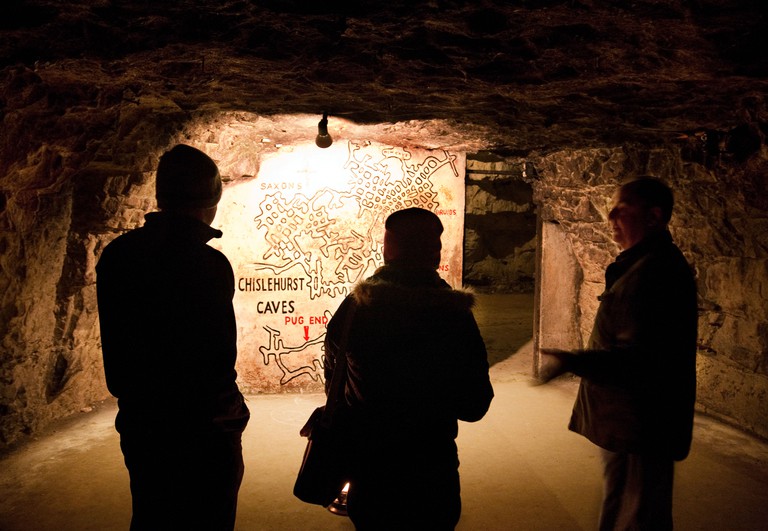 © Kumar Sriskandan / Alamy Stock Photo
You’ll have to venture off the beaten track for this man-made cave network, which was chiselled into the far side of Elmstead in southeast London. However, the journey’s worthwhile. Chislehurst Caves have served all manner of ghostly purposes since opening to the public in 1900, from storing World War I munitions to being the deepest air-raid shelter in London during the Blitz. Today, they’re an esoteric locale for concerts and weddings, albeit plagued by something… sinister. A priest supposedly died of fright down here and a man that stayed overnight reported sounds of heavy breathing behind him; he’s since said that nothing could tempt him back.

Try black pizza with the vampires of Lost Boys, Camden

Pizzeria, Italian
Facebook
Email
Twitter
Pinterest
Copy link
Share
Cap off a day of indulging your morbid curiosity with a dish that does the same. The Lost Boys restaurant is just as dark and silly as the cult vampire flick after which it was named. The pizzas are made with black dough, and few things are more goth than that. Just as quirky are the toppings; the Jack Skellington has a butternut purée base with shallots and goats cheese. Fair warning, though: you will poo black tomorrow. Nothing is more goth than that.

Ghost hunt at the Langham, the most haunted hotel in the UK 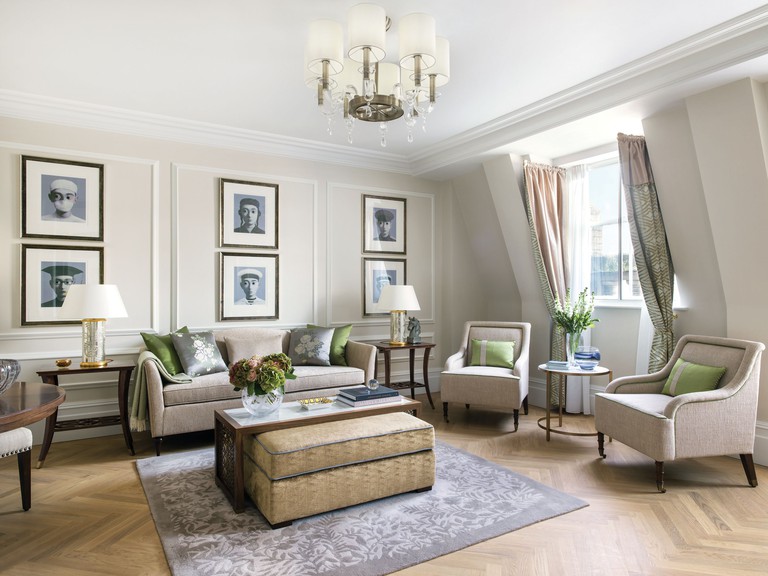 Courtesy of The Langham / Expedia
The Langham Hotel is among the oldest in London, opening in 1865, so it being the most haunted spot in the capital should come as no surprise. The most frequently reported spectre here is that of a Victorian gentleman in Room 333, although, apparently, he only checks in during October. Thankfully, any ghost sightings will be washed away by the traditional, cosy rooms and wellness facilities. Grab a cocktail at the Artesian bar, which was voted the best in the world for four years straight from 2011-15.

Stay mere strides from death at the Corner Hotel 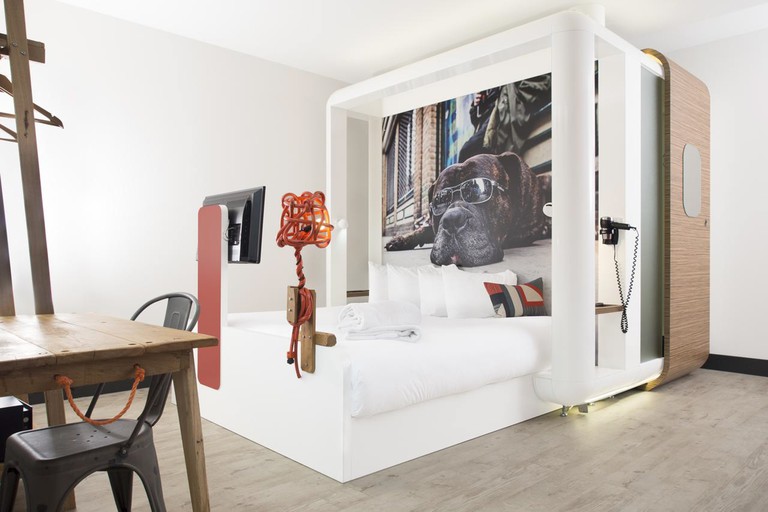 Courtesy of Qbic Hotel London City / Expedia
The Corner is a well-priced option if you want to base yourself at the heartland of dark tourism in London. A location in Whitechapel puts you only steps from where Jack the Ripper murdered his third victim, Elizabeth Stride, while the Tower of London is a 20-minute walk away. Despite all that bleakness, the hotel itself is as quirky as they come. Giant photos of a sunglasses-donning dog or Brick Lane tourists await in the individually designed rooms, while bicycle parts decorate the bathrooms. 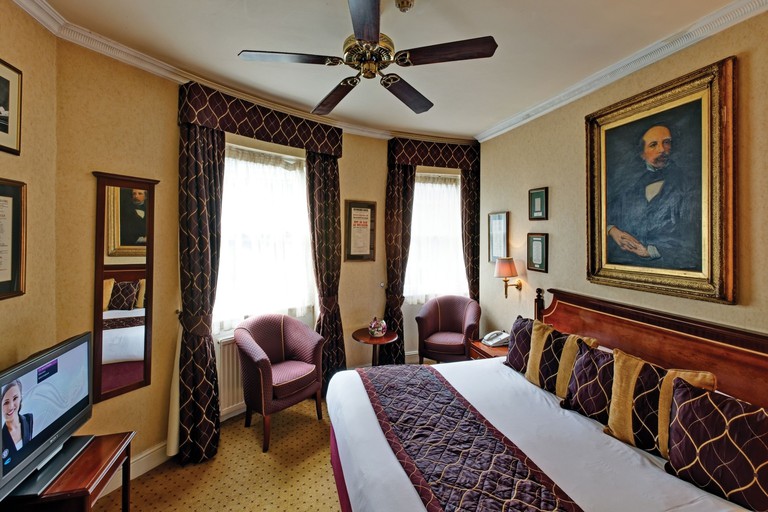 Courtesy of Grange Blooms Hotel / Expedia
Hunker down in Holborn and pray for a good night’s sleep undisturbed by the resident ghost at the Grange Blooms Hotel. The spirit of one Dr John Cumming supposedly haunts this historic boutique hotel. A minister who was obsessed with the end of the world, he allegedly promised that he’d live to witness armageddon; if the winter-night sightings of him are to be believed, he may fulfil that vow. Try to relax in one of the 26 ensuite rooms of this antique stay, then escape to the adjacent British Museum in the morning, just two minutes away on foot.

Shred at the Ruby Lucy Hotel, the gateway to the Southbank 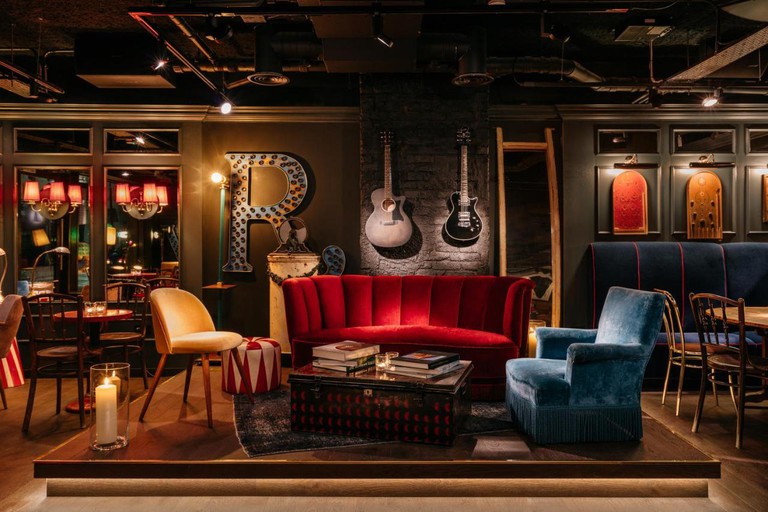 Courtesy of Ruby Lucy Hotel / Booking.com
If you’re heading to London by train, this characterful hotel should be at the top of your places to stay. It’s only a three-minute walk from Waterloo Station, so check in, unpack and then advance along the Southbank, where Shakespeare’s Globe and the Clink Prison await. Ruby Lucy is a musical wonderland, with colourful drums and bongos in the lobby; you can even rent an electric guitar during your stay. Mercifully, the rooms are less loud, adorned in neutral whites and uniformly cosy.
Give us feedback