Fashion On The Ration: 1940s Street Style at The Imperial War Museum

To mark the 70th anniversary of the end of the Second World War, the Imperial War Museum is running an exhibition until the 31st of August on how fashion survived, and even thrived, during WWII. Think you know about 40s style? Think again. 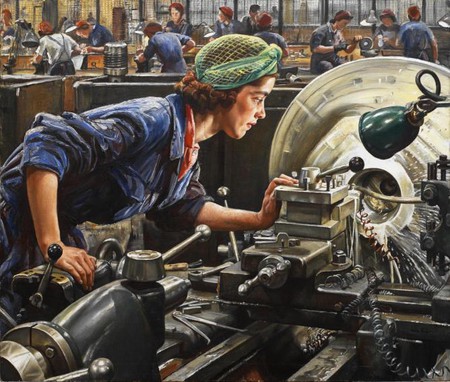 Loftus was ‘an outstanding factory worker’. Knight expected to do a studio portrait but the Ministry of Supply requested that she be painted at work in the Royal Ordnance Factory in Newport. | Courtesy The Imperial War Museum

There are some widely known fashion war stories – the drawn-on lines for fake stockings, the smear of lipstick to boost morale. However, the most impressive thing about the Imperial War Museum’s current exhibition on the topic, Fashion on the Ration: 1940s Street Style, is its depth and breadth of detail beyond the common tales. Three hundred exhibits (including photographs, clothes, accessories, film, audio, interviews, and letters) have been thoughtfully curated into six easily navigated sections. Each one is filled with fascinating items and anecdotes, ensuring that you will leave the exhibition with a far richer picture of the era.

During the Second World War, British men and women had to find new ways to dress as austerity measures and clothes rationing constricted their accustomed fashion habits. Unable to replace worn out items with the ease of former years, the British public demonstrated amazing adaptability by renovating, recycling, and making their own clothes. Fashion became a means of defying the misery of war, identifying oneself with the common effort through uniform, and unleashing one’s creative potential. 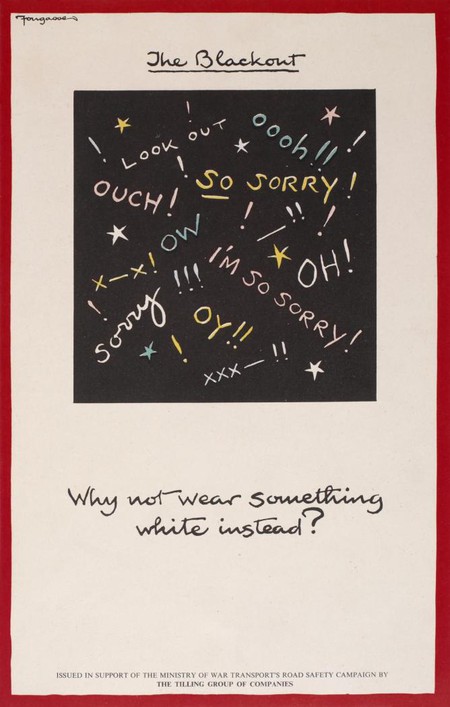 A black square filled with coloured text, which is designed to represent the remarks of people bumping into each other during a blackout. | Courtesy The Imperial War Museum

The first section of the exhibition is ‘Into Uniform’, which looks at how the design of uniforms determined the recruitment popularity of their respective organisations. The British became a nation of uniform wearers, both at home and on the Front, and sought to feel pride in what they wore. The Americans, with their sharply tailored and far more detailed uniforms, were a source of jealousy for British soldiers – particularly as their dress made them very attractive to British girls. The importance of these uniform designs did not end with the war; they still shape our British fashion aesthetic. Every winter season, fashion designers return to their thick fabrics, precisely tailored shapes, and military detailing for inspiration.

Yet Fashion on the Ration extends its presentation beyond the obvious wartime dress of uniform. It describes how integral the fashion houses were to the war effort. Ingenious designs emerged to adapt everyday items to the specific, contemporary needs of the Home Front. Designers created handbags with built-in gas mask holders, and luminous accessories to counter the frequent accidents in black-outs. One of the inventions has seen a phenomenal revival seventy years on: the onesie. The one-piece (a ‘shell suit’) was born as a quick item to pull on for warmth when the air-raid siren sounded. Winston Churchill was a big fan, and frequently wore his in the evenings (much to the chagrin of his wife, as his secretary describes in the exhibition via an audio interview). Churchill’s family called the suit his ‘romper’ – and a trend was born. Fortunately, we pull on our onesies now with far less terror than felt back then. 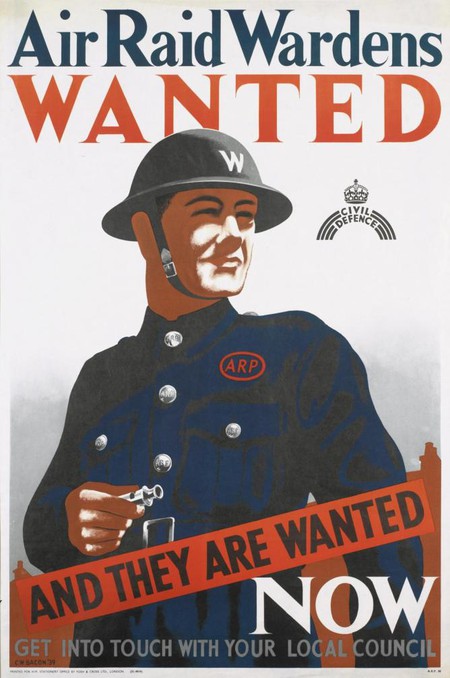 The exhibition also has extensive coverage of the Utility Clothing scheme, a 1941 initiative in which designers were employed to tackle unfairness in rationing and standardise production. A single item of clothing could not have more than five buttons. Elastic was in extreme shortage, and therefore only permissible for female underwear. Shoes could not be higher than two inches. A double breasted suit was an opulent waste of fabric. Yet, despite these restrictions, designers created a beautiful range in which quality and style were paramount. These were designs to last, worthy of the investment of one’s precious clothing coupons. A number of the dresses are displayed in Fashion on the Ration, and they would not look out of place on the streets today.

But Fashion on the Ration emphasises that the efforts of the government and fashion houses would have failed if it weren’t for the creativity and care of the public. It is hard to imagine today, with our fast fashion culture, the desperate need to make a limited wardrobe last. Without the luxury of replacing exhausted items, people learnt how to darn their tights and turn a man’s suit into two dresses and a child’s shorts. ‘Make Do and Mend’ classes were set up to help people save coupons and use all the materials on hand at home effectively. Shampoo and hair products were limited, which led to a rise in hats and hair-scarfs. Make-up became a crucial tool for seeming, and feeling, “put together”. Lipstick is, after all, ‘lips in uniform’. In this context of shortage and self-conscious care, imagine the shock of Dior’s ‘New Look’ in 1947. The exhibition describes the initial British reaction of dismissal and anger at such wastage, and the gradual softening over a number of years as the desire for something fresh and frivolous grew. 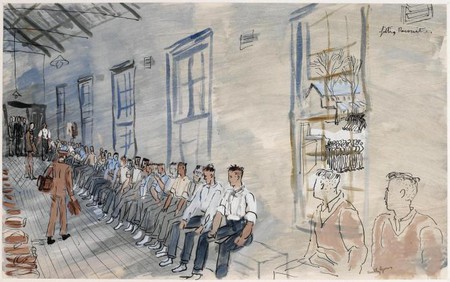 This scene was probably recorded during Gross’ two weeks with the Guards Barracks at Caterham in Surrey. Recruits sit in a line in a windowed room waiting to be given their uniform. Two men distribute items of clothing to them. | Courtesy Imperial War Museum

All these aspects of Fashion on the Ration are fascinating, but the highlight of the exhibit are the conversations you hear as you go round. Pick up a telephone and listen to the interviews of men and women who experienced this momentous time in fashion first hand. Watch interviews with contemporary fashion historians reflecting on how the period’s rise of mass production and utilitarian styles overthrew, and continues to dictate, British fashion design. But, most importantly of all, eves-drop on other visitors. You will hear fascinating memories evoked from the items on display: stories both first hand and recycled from older generations.

Fashion on the Ration is on at the Imperial War Museum until August 31, 2015.