Check Out the First Vegan Fried 'Chicken' Shop in the World 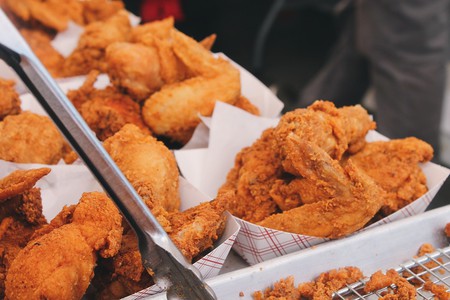 Fried chicken is the holy grail of all comfort foods. It’s the way the golden, crispy coating melts in your mouth after every bite. For people who have chosen to live a meat-free life, Temple of Seitan has answered their prayers. Behold, vegan fried ‘chicken’. Yes, you heard that right. Mouth-watering, crispy-crunchin’, cruelty-free fried ‘chicken’.

Whether you’re vegan or not, Temple of Seitan (also known as Temple of Hackney) has something for everyone to rave about. From tubs of mac n ‘cheez’, deli sandwiches and ‘chicken’ burgers, you’ll be peckish (pun intended) from just looking at their 100% vegan menu.

Hey guys we are SOLD OUT of subs and have 20 serves of popcorn chicken left 🙌🏻🙌🏻🙌🏻 EDIT: We have sold out!! We will come back next week with more 💜

Drop what you’re doing and head over to Hackney, where Temple of Seitan resides. Being the ‘first vegan fried “chicken” shop in the world’, they’ve gained themselves a clan of loyal customers since they opened earlier this year. They run out of stock on most days, so don’t wing it – get there early if you want some deep-fried grub.

NO DINNER SERVICE – today has been quite possibly the busiest day we have had to date. We have a limited amount of food left but if you haven't made your way over we suggest to come tomorrow! Good news is we have acquired a separate kitchen which we will begin to use shortly & this will allow us to increase our stock massively. Thank you always for your continued support and happy Saturday! 💕

Hang on, what is seitan?

Everyone’s heard about meat substitutes like tofu and quorn, but it’s time to introduce you to seitan. It’s basically wheat-gluten, also commonly known as ‘wheat-meat’. It derives from the protein of wheat, so for vegan body-builders, it’s heaven sent. Seitan can be seasoned in different ways to imitate the flavours of chicken, pork or beef.

Temple of Seitan has perfected that crunchy, perfectly golden coating with their equally awesome wheat-protein. The ‘meat’ is seasoned perfectly with just the right garlic-to-paprika combination, and can fool avid chicken lovers into believing it’s the real thing. Save your pennies though as the two-piece chicken is being sold for £6 (US$8) – not entirely cheap, but it’s the price we pay for some good, guilt-free ‘meat’.

ALMOST SOLD OUT – if you aren't in line already, maybe wait till tomorrow – we made triple we had last weekend but not enough 🌜getting an extended kitchen in Feb so hopefully higher stock levels soon….

Another top pick is their Temple burger – their take on the classic chicken and bacon version. As if they didn’t treat us enough with vegan fried ‘chicken’, they threw in that vegan ‘bacon’ too! Complimented by their own vegan mayonnaise, this magnificent sandwich has everything going for it. KFC eat your heart out, there’s a new burger in town.

We are open from 12! 😍 #Repost @veganfoodiealexis ・・・ arguably my favorite meal in London: vegan fried chicken from @templeofseitan!!! i had seen a video for this place ages ago and promised myself that i would eat there at some point. i got a chicken burger with mayo and bbq, and then their mac & cheese with mini bacon bits. ah-maz-ing!! definitely worth the wait 😋. #vegan #veganfood #veganfoodshare #veganfoodporn #veganism #vegansofinstagram #vegansofig #veganlifestyle #vegano #templeofseitan #londonvegan

Let’s talk about the sides now. Would a fried chicken meal be complete without the authentic side dishes of mac n ‘cheez’, and coleslaw? Everyone’s childhood favourite has the right balance of creamy and tangy cheese, sprinkled with amazing bacon bits and topped with a generous helping of creamy cheese sauce. With their deep-fried seitan, it’s a match made in foodie heaven.

Mac & cheese: the solution to all life's problems 😏😏😏 #Repost @plantsandgoodvibes ・・・ Get ready for a vegan food spam 😂 Today I visited east London to see a friend and eat lots of yummy vegan food. We went to Temple of Hackney for AMAZING food 😍 this mac n cheese was honestly incredible 🙏🏻. Worth the 1 hour queue, & the burger I ate was so good too which I'll post in a sec✨

An honourable mention to their coleslaw, a modern (and healthier) twist to a classic southern side. They’ve substituted the creamy element of the classic recipe for a more vinegary one that contrasts with the gooeyness of the macaroni and cheese, for those looking for a fresher, punchier side dish.

If the Temple of Seitan didn’t bless humanity enough, they also offer gluten-free options such as ‘chicken’ nuggets.

So head to Hackney for the ultimate comfort food fiesta.