Caught In Words, Top Literary Things To Do In And Around London 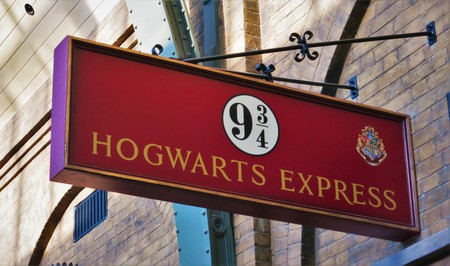 For centuries London has been the home and inspiration to a great number of writers. Many characters were born or brought up here, and many houses and streets have become immortalised in the pages of books. Kriti Bajaj looks at the best and most iconic literary pastimes and haunts that this great metropolis has to offer.

If you have lived in London long enough, you can see the legacy left by Shakespeare, Dickens and Woolf; you can visit the famed 221b Baker Street and Platform 9 ¾; and you can almost see Clarissa Dalloway buying flowers. Below are a few of the best and most iconic literary pastimes and haunts, including places like Oxford and Canterbury that are an easy distance from London, all tailored for the budget traveller. 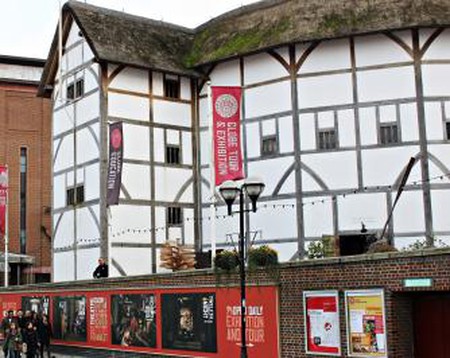 The Shakespeare’s Globe theatre stands on the south bank of the Thames, next to the Tate Modern and across the river from St. Paul’s Cathedral. As is widely known, the original theatre from Elizabethan times was demolished in 1644 and was rebuilt at the current site owing to the efforts of Sam Wanamaker. Still entirely made of wood, the stage and stalls of this open air playhouse are faithful to its historicity, and you can imagine centuries of Londoners watching and being entertained by the Bard’s timeless plays. The exhibition and tour is informative but slightly costly (£13.50); watching a play is, however, as cheap as £5 for a standing ticket, which is the true way to enjoy it. Apart from its matinees of Shakespeare’s plays, the Globe hosts productions by other playwrights and events like Sonnet Walks, concerts, talks and 2012’s glorious Globe to Globe festival which featured 37 plays in 37 different languages performed by theatre groups from across the world. For true Shakespeare fanatics, you can also visit The Rose, Bankside theatre (56 Park Street), and Stratford-upon-Avon, Shakespeare’s birthplace and the home of the Royal Shakespeare Company, which is about a two-hour drive from London. 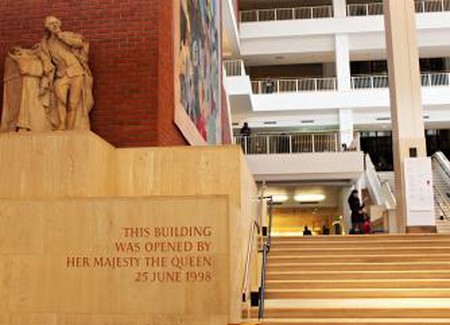 Free Exhibition at the British Library

The British Library is home to over 150 million items in various formats and languages from all over the world. Situated at 96 Euston Road by King’s Cross/ St. Pancras, it hosts a number of special literary exhibitions. Its permanent exhibition, ‘Treasures of the British Library’ (Sir John Ritblat Gallery) is a treat for any lover of literature, not least because it is free to enter. From Shakespeare’s first folio, Arthur Conan Doyle’s unpublished manuscript, Yeats’ singsong recitation of his poems and Wordsworth’s crossed-out draft of a poem to Jane Austen’s writing desk, Reader – I married him in Charlotte Bronte’s own handwriting, Virginia Woolf’s Mrs. Dalloway diary and Lewis Carroll’s beautiful handwriting, Treasures of the British Library has got it all. 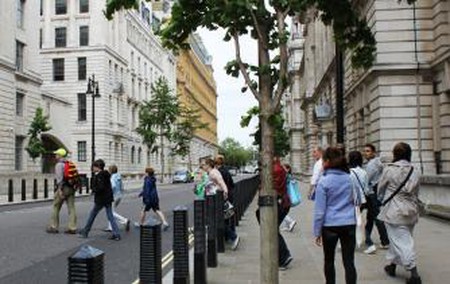 Walking tours are one of my favourite ways to explore a city, as a tourist or otherwise. A good walking tour is informative, entertaining, interactive as well as unique – you learn anecdotes and local customs that you probably wouldn’t come across on your own. London Walks offers a variety of themed tours (£9, free for kids), including Victorian London, Jack the Ripper haunts, London of the Beatles and Rock and roll, Sherlock Holmes, Dickens and Oscar Wilde, tours of Soho and a street art walk, to name just a few. The Harry Potter tour would be especially attractive to children (and some adults). I signed up for it last May and it was an afternoon to remember – a walk through sunny Westminster that combined film locations, places of importance mentioned in the books, and streets and shops that influenced JK Rowling. The tour also includes information on other historical and tourist attractions in the city, such as how Charing Cross got its name and how Cecil Court was linked to Diagon Alley. 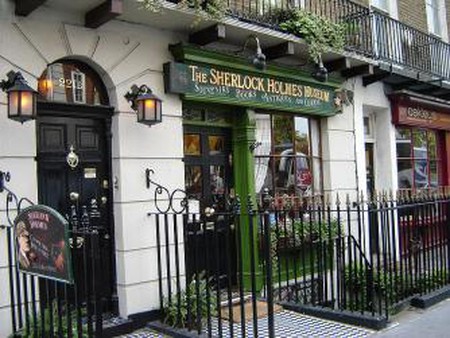 A number of sites across London, such as the residences of authors/ poets/ characters, have been turned into small museums to preserve their literary, historical and architectural heritage. Among these are the Sherlock Holmes Museum (221b Baker Street, £8), the Charles Dickens Museum (48 Doughty Street, £8), Keats House (Keats Grove, Hampstead, £6,5) and Dr. Johnson’s House (17 Gough Square, £4.50), where Samuel Johnson compiled his Dictionary of the English Language.

An Afternoon at Highgate Cemetery

While enjoying cemeteries may sound like a little strange, there is something about the peace and love, the act of remembering and marking someone’s place on this earth that can create a captivating yet calming experience. Highgate Cemetery is a beautiful, tranquil location in Swain’s Lane, right next to Waterlow Park. Still operating, the cemetery is most famous for the grave of Karl Marx, but is also the resting place of several other figures of literary importance. The East cemetery is accessible to visitors for a fee of £4 and is where Marx, Douglas Adams, Sir Leslie Stephen, George Eliot (Mary Ann Cross), Herbert Spencer and Anna Mahler are buried. Many of the monuments are unique and artistic. The West cemetery is accessible only by guided tours costing £12 (includes entrance to the East cemetery), and is the resting place of poet Christina Rossetti, her brother William Michael Rossetti (co-founder of the Pre-Raphaelite Brotherhood), the parents of author John Galsworthy and the Dickens family (except Charles Dickens, who is buried at Westminster Abbey). The cemetery also hosts talks and events. 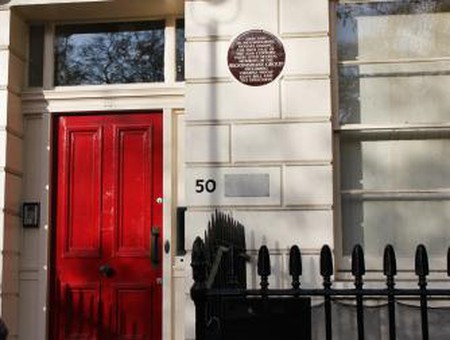 London’s famous blue plaques are peppered across the city. They commemorate locations that were associated with public figures of literary, historical, and cultural importance. One of my favourite locations for ‘plaque hunting’ is Bloomsbury. The leafy borough was, at least temporarily, home to Charles Darwin, Charles Dickens, Sir William Empson, Percy Bysshe and Mary Shelley, Dame Millicent Fawcett, Raja Ram Mohun Roy, E. M. Forster, members of the Bloomsbury Group and the Hogarth Press. The Pre-Raphaelite Brotherhood was founded here as well. Goodenough College runs free guided walks of the area, and if you’re in London in October, the Bloomsbury Festival hosts free themed walking tours. 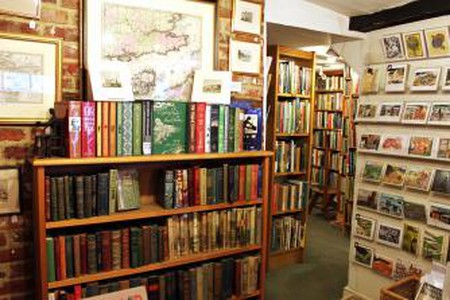 A Day Trip to Canterbury

Canterbury is a historical town in Kent, most famous for its cathedral where Thomas Becket was murdered in 1170. The cathedral then became a place of pilgrimage, commemorated in 14th century writer Geoffrey Chaucer’s famous work, The Canterbury Tales. Entry to the cathedral is not free (£9.50), but walking around the quaint streets of this UNESCO World Heritage site is. Also of literary interest are the Marlowe Theatre (named after the famous Elizabethan playwright Christopher Marlowe who was born here), the Canterbury Tales at St. Margaret’s Street (a recreation of 14th century England based on Chaucer’s The Canterbury Tales pilgrimage from London to Canterbury, £8.50), and the Chaucer Bookshop established in 1956 (6-7 Beer Cart Lane). Canterbury is less than an hour away from London with the High Speed Service train and is a compact, walkable city. 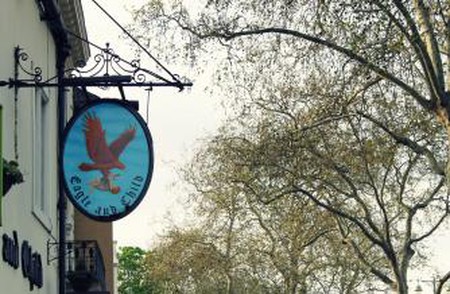 A Day Trip to Oxford

Oxford is a literary gem, and of course well worth a visit for its famed university. It is associated with a number of authors like J.R.R. Tolkien and C.S. Lewis (‘The Inklings’), Kenneth Grahame, Oscar Wilde and Lewis Carroll. Phillip Pullman’s His Dark Materials trilogy features Oxford locations, the house and sheep shop in Alice’s Adventures in Wonderland actually exists and tour guides can also point out the door and lamppost that may have inspired Narnia. A number of scenes from the Harry Potter movies were filmed here as well. A walking tour is recommended if you are especially interested in literary and historical anecdotes (free walking tours are available at www.footprints-tours.com). Don’t forget to stop for a drink or a bite at the Eagle and Child (49, St. Giles), a pub founded in 1650 where ‘The Inklings’ used to regularly meet. Oxford is about an hour from London by train and 1.5 hours by coach, with very frequent connections for both.