The intense relationship between two characters under unimaginable scrutiny is at the heart of this superb wartime thriller, with Brad Pitt and Marion Cotillard boasting the perfect amount of “old school glamour” to make this sweeping epic work.

Undercover World War II operatives Max Vaten (Brad Pitt) and Marianne Beausejour (Marion Cotillard) meet for the first time in Casablanca. It’s 1942 and the Moroccan city is overrun with Nazis. Canadian airman Vaten and French resistance fighter Beausejour are tasked with posing as a married couple so that they can get close enough to assassinate the German ambassador, who is believed to be in league with Adolf Hitler.

Both agents are experienced in field work, and seamlessly slip into character. Marianne explains how physical romances are not the problem, but emotions are. As the pair spend weeks together planning their attack, they fall for one another and embark on a passionate affair. They perfectly execute their mission and without hesitation Max asks Marianne to return to England with him and become his wife. 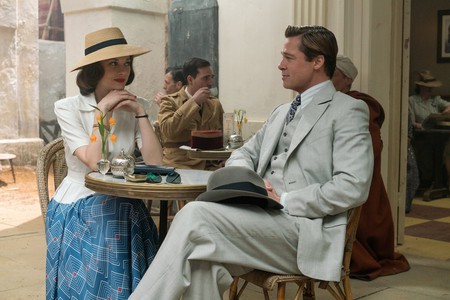 The union is initially frowned upon by Max’s commander (Jared Harris), but he is powerless to stop the wedding. The couple move to Hampstead to start a family, while Vaten continues to do work for the Allied Forces.

Out of the blue, Max is called into head office and is told that his wife, and mother of his child, is actually a German spy who has been covertly sending encrypted messages to the enemy. High command have set a trap, which Max must see through, to prove Marianne is not who she claims to be. The penalty if she is guilty, or if Max fails to go through with the investigation, is death.

It’s a chilling set-up, one that is slow to build but pays off handsomely.

Based on a true story, the dilemma faced by Vaten is painfully etched on Pitt’s face throughout the second half of the film. The shift in gears from pleasant romance (allowing for the mass dinner party execution), to tense paranoid thriller is smoothly handled.

The opening scenes, full of whispered seduction and undeniable onscreen chemistry between Pitt (Se7en) and Cotillard (Rust And Bone), sizzle with a bristling energy that is infectious.

Director Robert Zemeckis (Back To The Future) might not have been the obvious choice for a film like this, but given the different elements of his previous hits you can understand how he has managed to pull of the emotional subtlety required.

There is the outrageous flirting of Romancing The Stone, the thrilling action of Flight and the heartbreak of Forest Gump.

All of this is captured in a beautifully choreographed sequence where Max and Marianne are passionately intimate for the first time and then, in the very next scene, emotionally fall for one another when dressed up for a lavish party. It just so happens that this party is also where they will violently gun down a number of high-ranking German officials, but their eyes, and ours, are on each other.

As the film segues into the tonally different latter portion, charged as it is with head shaking disbelief on the part of Pitt, it takes a while to recalibrate. We get the joyous life of the couple being established in blitz-ravaged London and the abrupt revelation that Marianne might actually be an expert liar, in turn destabilising everything we thought of her. There are moments where Pitt, internally churning masses of information, visually expresses his inability to see his wife as she once was. Even when he is unsure of the truth, and by the end of the film there is no doubt, Pitt expresses a look of someone who can’t believe a word that the love of his life has ever said to him.

The emotions he gets across here are universally recognisable, and all the more gut-wrenching for it.

For all the controversy surrounding the making of the movie, something we couldn’t care less about here, the film itself is a triumphant sweeping romance.

Allied is released nationwide from November 25