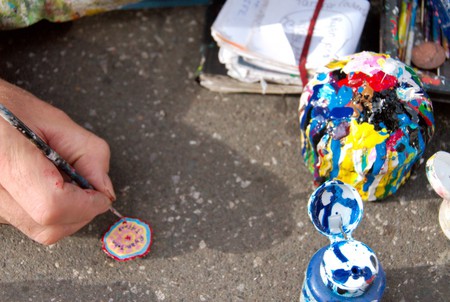 Ben Wilson has turned hundreds of chewing gum blobs on London’s Millennium Bridge into tiny works of art, offering a street-level alternative the nearby art temple that is Tate Modern. We take a look at how, by treating this ubiquitous waste as a canvas, Wilson creates a thought-provoking intervention in a public space.

Ben Wilson is an artist better known by another name: The Chewing-Gum Man. For more than a decade he has systematically turned over 10,000 trodden-in chewing gums that pepper the streets of London into miniature canvasses. He has perfected a technique using a blowtorch and layers of acrylic paint and lacquer to make tiny, shining works of art at our feet. His subject matter ranges from minuscule yet realistic London scenes to brightly coloured abstract patterns and strange creatures. 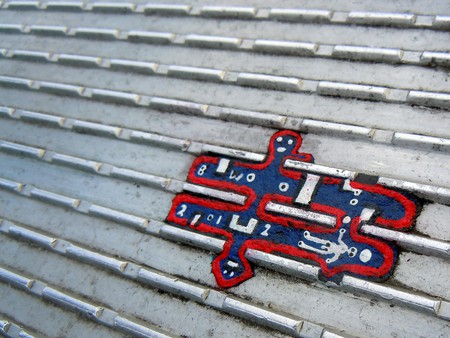 A huge amount of his work can be found in Muswell Hill, where he lives. However, he has concentrated much of his recent efforts on the iconic Millennium Bridge. Here, the urge is to look up at the some of London’s finest landmarks: the tower of Tate Modern and grand dome of St. Paul’s, but if you look down, instead you will discover a gallery in microcosm; an unsanctioned art trail leading right up to the entrance of Tate Modern. They are all too easy to miss, but once you spot one painted gum you suddenly see them all. 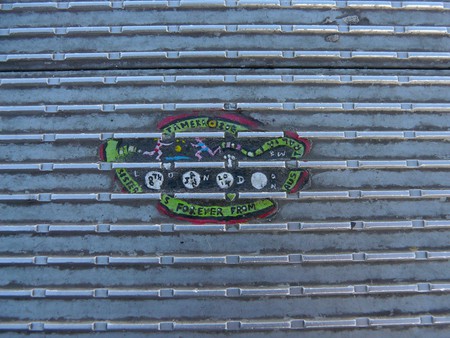 Although the works themselves are inconspicuous, Wilson draws a lot of attention when crouched on the ground, absorbed in painting a spot on the pavement over hours or even days. He has been arrested numerous times, but carefully avoids the definition of criminal damage by sticking to the gum, which isn’t technically part of the property. He works on waste, making adjustments to otherwise overlooked and unwanted parts of our environment as he finds them.

Wilson’s gum art (both the process and the outcome) is a subtly subversive intervention in a public space. He overtly disregards convention by lavishing attention on something discarded and worthless, lying down for hours to work on his art on a major thoroughfare. The fact that Wilson has not been deterred by his brushes with the police makes his work seem all the more irreverent and joyful. What might irk the local council has amused and delighted hundreds of people who have stumbled across him and his work.

The public engage with the gum-paintings, both in their completed state and sometimes as they are being made, interacting with the artist who will take requests: adding names, dates and symbols important to an interested stranger. This project is as democratic as it is whimsical and more than a little bit cheeky. 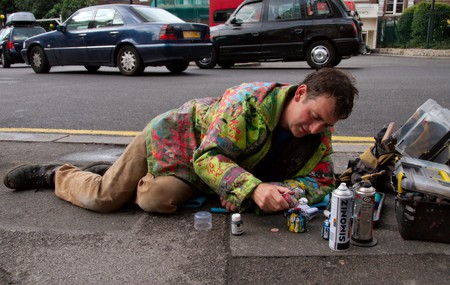 When Wilson isn’t present, his completed works catch the eye of the passerby and reveal themselves more and more through the viewer’s engagement with them. In this way, the casual walker, having spotted the first glimmering gum, suddenly becomes a painted chewing gum hunter, scanning the ground for more. Discovering Wilson’s work at your feet can change your perspective and your trajectory. The bridge turns into a gallery and your simple walk turns into an art trail. 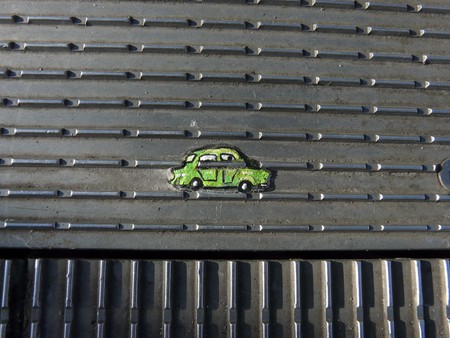 There is something quite magical about finding the gum art for yourself – perhaps even by accident – in the shadow of one of the most well-attended art galleries in the world. Wilson’s unsanctioned street art stands in direct contrast to Tate Modern, which represents the centre of the established, contemporary art elite. Wilson’s work sits literally and metaphorically outside this institution. These trodden-on artworks illuminate the grey and grimy ground, offering an antidote to the preciousness of the white-walled gallery. They are free for all to discover and enjoy and will be there until the footfall of a million Londoners and tourists wears them away. So, the next time you are crossing the Millennium Bridge, we recommend looking down for a change.