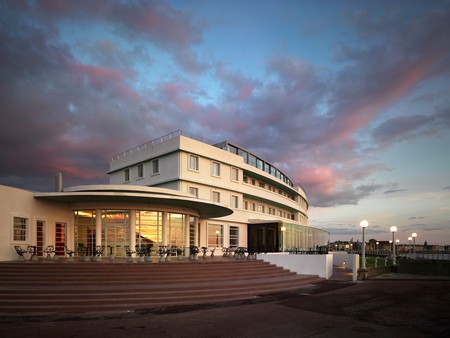 Impressive, exquisite Art Deco buildings are dotted all over Britain, and the grandest examples are often found in unexpected places. Discover the cities where you can admire the most striking remnants of the stylish 1920s-30s movement, as recommended by an expert in the field.

Despite some being almost a century old, the luxurious Art Deco buildings of Britain, with their streamlined designs and clean, geometric shapes, have aged beautifully. Examples of the architectural style can be found all over the country, from Swansea to North Ayrshire, and encompass both functional public and semi-public spaces – swimming pools, airports – as well as industrial edifices, civic buildings and entertainment venues. Architectural historian Elain Harwood, the author of Art Deco Britain: Buildings of the Interwar Years, has chosen her ten favourite examples of the style for Culture Trip, from every corner of Britain. 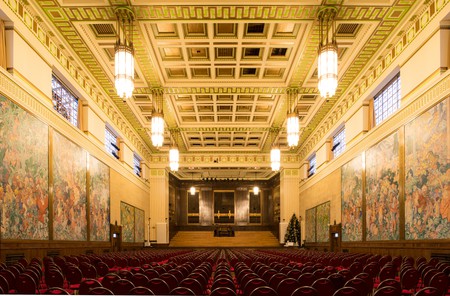 In 1924, the House of Lords commissioned Frank Brangwyn (1867–1956) to decorate its Royal Gallery in commemoration of the First World War. Brangwyn produced a set of decorative fantasies depicting ‘various Dominions and parts of the British Empire’. But by 1930, the Royal Fine Art Commission rejected them. Brangwyn had Welsh origins, and both Cardiff and Swansea expressed interest in the panels. The Guildhall in Swansea won out, when councillors offered to raise the ceiling of its proposed assembly hall especially for the panels. Percy Thomas was South Wales’s leading architect, a maestro of Beaux Arts classicism. The Guildhall complex is a statement of civic grandeur and an act of defiance against unemployment that retains a remarkably intact sequence of public interiors. 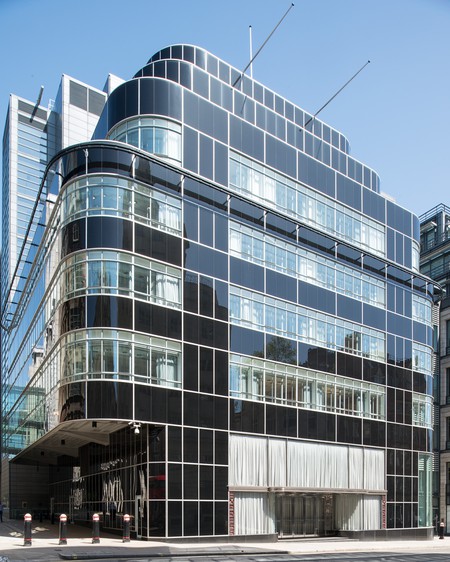 Engineer Owen Williams produced a complex yet elegant concrete frame for the Daily Express building that offered unimpeded space to extend the press lines through the basement, then imposed a dramatic, functional façade on to the offices. The choice of shiny black Vitrolite, contrasted with strips of chromium and glass for the front, is thought to have been the brainwave of Ellis & Clarke’s future partner Bertram Gallannaugh. In total contrast to this streamlined façade is the entrance lobby, perhaps the most sophisticated Art Deco work of Robert Atkinson. The covings and sunburst of the ceiling and rippling floor patterns are Atkinson’s, but the most dramatic features are Eric Aumonier’s reliefs of a shining ‘Britain’ and ‘Empire’. 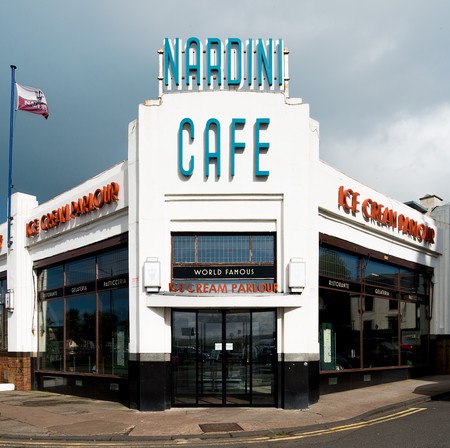 Nardini’s is an iconic ice-cream emporium, its long ‘Snowcrete’ frontage visible from the daytripping steamers chugging ‘doon the watter’ from Glasgow. The interior has been remodelled, but the vintage Lloyd Loom furniture gives just the right touch of authenticity and style. Pietro Nardini arrived in Scotland from Tuscany in 1890, and ran a fish-and-chip shop in Paisley with his wife Rosa. When, in 1934, a villa came up for sale on the seafront in Largs, Pietro saw the potential. He replaced it with a café and restaurant, bringing in architects Charles Davidson & Sons. The local paper reported “an air of comfort and luxury,” enhanced in the restaurant by a six-piece orchestra. A feature was a £300 soda fountain from the United States. 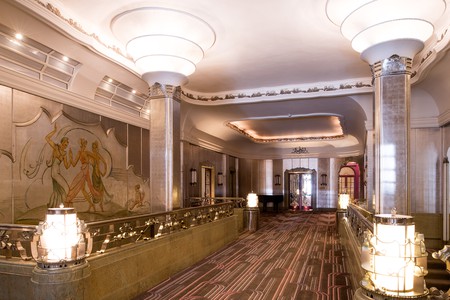 The Park Lane Hotel contains the best Art Deco ballroom in London, behind a disarmingly quiet façade. Semi-submerged in a basement, the ballroom was described by the art historian Dan Klein as ‘Hollywood spectacular’ for its giant chandeliers, uplighters and peach-tinted mirrors – a night architecture designed to show the debutante at her most elegant. Finest of all is the ballroom foyer, or ‘Silver Gallery’, so-called for its walls of silver leaf lacquered with gold contrasted with Swedish green marble and stained sycamore. 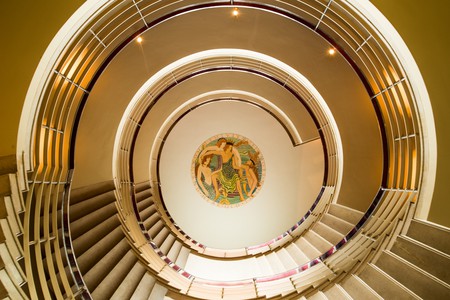 The Midland was built by the London, Midland and Scottish Railway’s hotel chain, replacing an 1848 hotel. Oliver Hill was commissioned for the job, an enthusiast for swimming and nude sunbathing who had embraced a lively Modernism after visiting the Stockholm Exhibition of 1930. Hill was no structural expert, and his Modernism exudes a flashy showmanship befitting the seaside. The hotel curves towards the sea, with a separately curved end tea pavilion. Emulating Sweden, it is filled with art. Eric Gill modelled two seahorses resembling Morecambe shrimps over the central convex entrance, and inside he added a mammoth stone relief of Odysseus Welcomed from the Sea by Nausicaa. 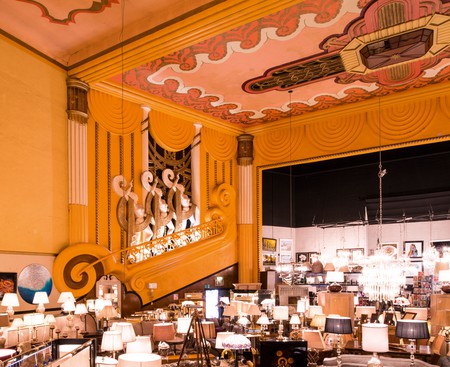 With its stylish, American-style vertical sign, the Northwick would stand out in a city centre, let alone on the edge of town. Wilford was a competent architect, but he did not design the lavish interior, which is the work of John Alexander, a designer and fibrous plaster manufacturer based in Newcastle upon Tyne. This is the only building where his work survives in whole, with three dancing girls riding a giant wave or chariot either side of the stage, their hair spiralling over the surf, and ‘S’-shaped motifs in the balustrade that suggest seahorses. 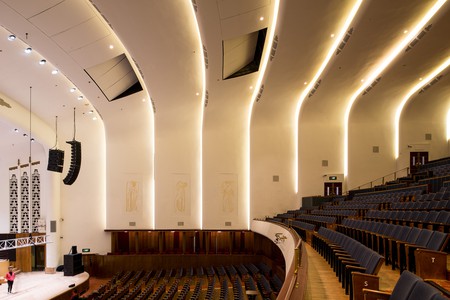 Rowse’s masterpiece in the Dudok style is modern yet grand in its scale and – unusually for the idiom – symmetrical. It replaced a Neoclassical concert hall built in 1846–49, which was destroyed by fire in July 1933. Rowse brought in as his assistant Alwyn Edward Rice, who had designed a theatre as his student project. The final design follows the massing and general layout of this scheme. The Victorian hall was a large volume with excellent acoustics. The replacement followed the fan shape popularised by the Salle Pleyel in Paris, which Rowse divided into staggered sections by a series of lighting coves, the figure on each leaf providing the hall’s only decoration save for perforated screens around the stage. 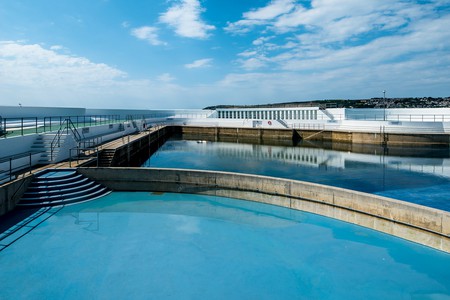 The Jubilee Pool in Penzance is a beautiful lido, built to deflect the pounding storm waves of the surrounding ocean | © Elain Harwood

The Jubilee Pool was built near the harbour at the Battery Rocks, a popular bathing spot until damaged by erosion and surrounded by slum housing. The council cleared the old cottages in 1933 to create a park, and below it a lido. The pool was 330ft (100m) long by 240ft (73m) wide at its greatest extent, and its depth made it the largest in the country by volume of water. Its curves were determined by the rocks on which it is built – Latham used the existing seabed for economy and designed the shape to deflect the pounding storm waves, inadvertently also making a lido of exceptional beauty. The pool was rescued in 1992 by John Clarke, a retired architect who formed the Jubilee Pool Association. It was listed and restored, reopening in 1994, and refurbished in 2014–16.

The demolition of the Firestone Factory left Hoover as the supreme example of an Art Deco industrial building in Britain. Thomas Wallis’s partner, Frederick Button, oversaw the design and supervised the work, beginning with the office front that survives today. The engaged fluted columns, with faience bands but no moulded capitals, metal windows and a giant sunburst over the entrance advertised modernity to passing motorists. The frontage was carefully landscaped, but the interior was simple save for an entrance hall with fluted pilasters and a staircase with chevron sunrise ironwork, and resplendent green urinals in the gentlemen’s lavatory. 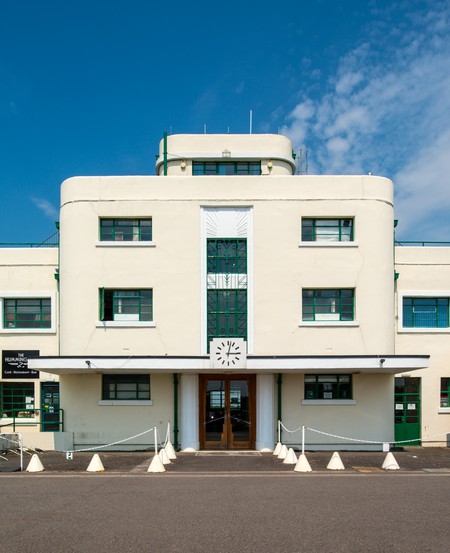 This surprisingly small building resembles a monoplane on plan. It contains a double-height foyer with a heavily moulded balcony, a wing of offices and the Hummingbird Restaurant, with original bar fittings. Two tiny aircraft continually circle the shallow central dome. A new control room (1988) sits atop the old, but otherwise the building retains its original character. It has appeared in several episodes of Poirot and in the film The Da Vinci Code (2006). Its No. 2 Hangar (listed grade II) also dates from 1936.