Around The World In 11 Essential Kitchen Knives 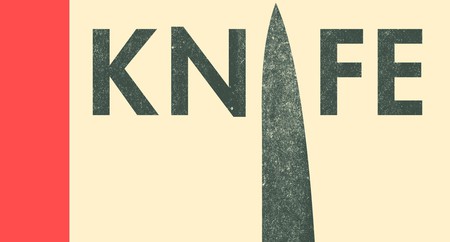 The cover of Knife, by Tim Hayward | Courtesy of Quadrille

“There is no object you own that is anything like your kitchen knife.” Why? It cuts flesh in a creative way — a dangerous weapon used by tender parents in the making of loving family meals. That is, at least, the view of award-winning UK food journalist Tim Hayward. His new book Knife: The Culture, Craft and Cult of the Cook’s Knife provides a fascinating guide to the chef’s quintessential tool, showcasing, in the process, 40 blades from across the world. Here are 11, for a taste. 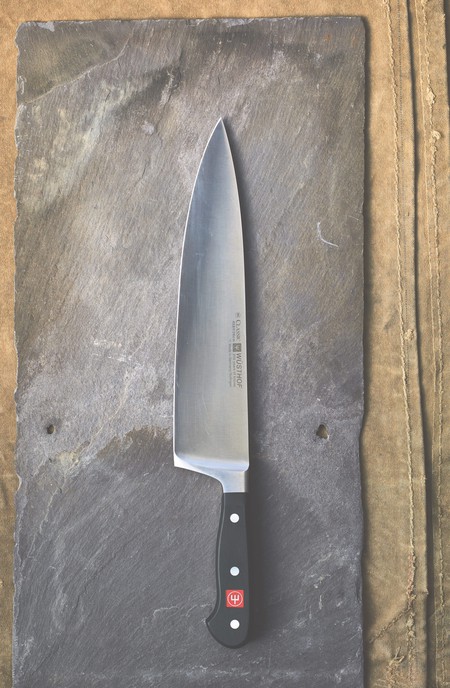 “The 8-inch is a gorgeously balanced knife and makes chopping a pleasure, but in skilled hands even the 10-inch – a monstrous great culinary ‘Excalibur’ – is as truly multi-purpose a tool as a cai dao. In a single shift a professional will use it for everything from chiffonading herbs, through boning a chicken and then back to brunoising carrots at high speed. The back (‘spine’) of the blade is used to crush herbs, the side to smash garlic to a pulp and the tip sharp enough for delicate surgical tasks like whipping out chicken oysters.” 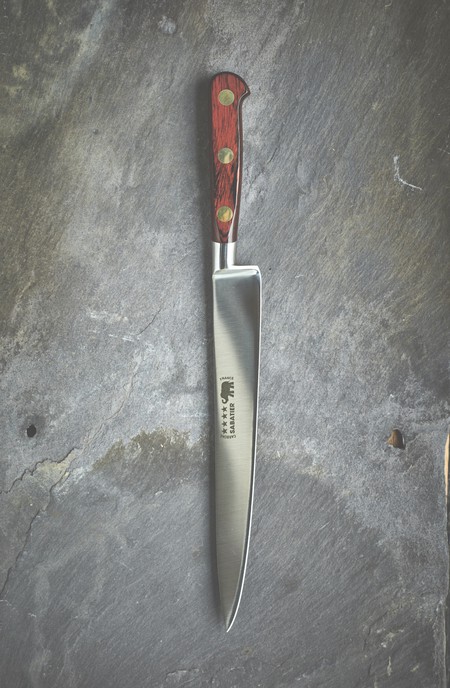 “Restaurants usually take delivery of pre-cut fillets of large fish so a chef will only regularly fillet smaller ones. For these the flexible filleting knife is perfect for the job. Flexibility means that the flat of the blade runs along the ribs with no waste of flesh and little chance of nicking the soft bones. The same technique, flexing the flat of the blade against the waste material, means that the flexible filleter is also a brilliant skinning knife and can work flat against the surface of meat, removing silverskin or tough connective material. It’s also terrific for poultry, which requires a more delicate approach.” 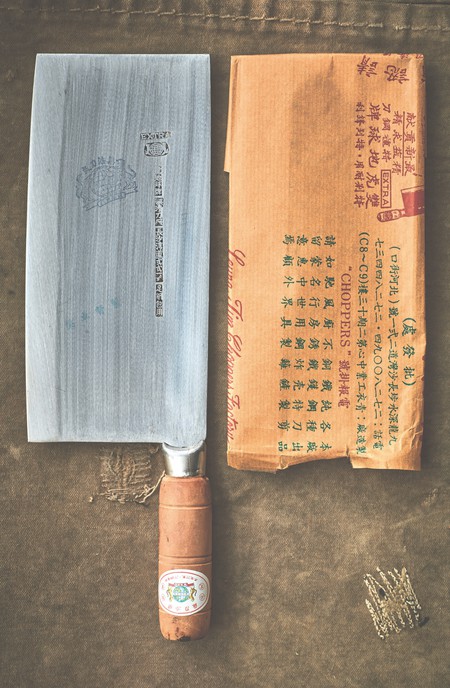 USES: HEAVY BUTCHERY AND FISH WORK WHERE BONES NEED TO BE CUT

“The traditional Chinese cleaver is a heavy beast. Because the blade is used with more force it needs weight, which would soon damage a delicate edge, so it’s ground into a wider wedge. This means there’s no point in all the careful laminating that makes for a sharpenable core, so the cleaver is forged out of a single slug of metal.

This traditional cleaver has little refinement and, though a regular user would get used to it, the cutting force is applied towards the back of the blade where most of the weight seems to sit. And it’s some serious weight. The cleaver is a monster to heft, the spine a beefy 6 millimeters thick and, if well maintained, quite capable of chewing through the heftiest of beef bones in a few swift strokes.” 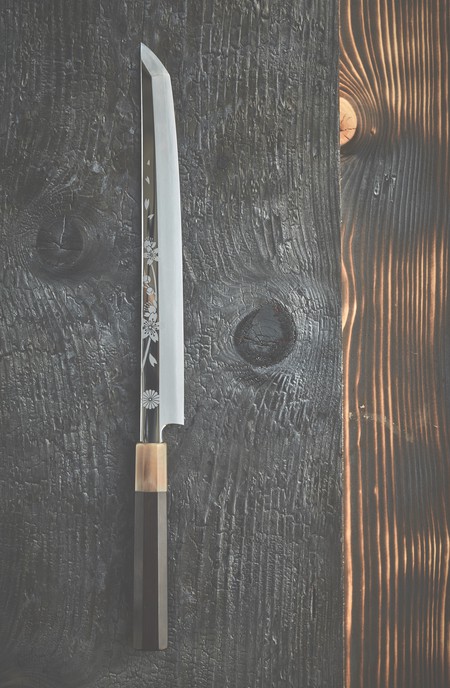 “The yanagiba or ‘willow blade knife’ is part of a family of knives used in sushi, sashimi and other fish preparation. By Western standards, the blade is exceptionally long, with professional sashimi cutters using blades over 360mm. The reason for this is that with a longer blade, the cut can be made with a single motion. ‘Sawing’ or repeated cuts mark the surface of the fish which, in such delicate presentations, should be pristine. Japanese cooks believe that putting any undue physical stress on the fish during cutting reduces the quality of the finished dish. This requirement for a visually perfect and mechanically efficient cut means that the yanagiba is probably the most highly evolved knife type in existence.“ 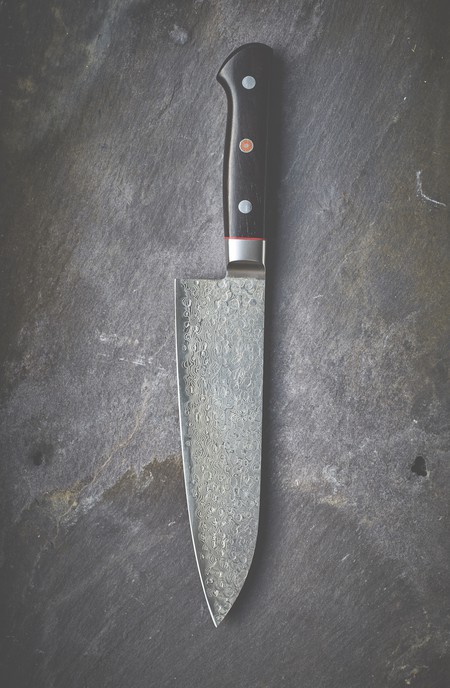 “The santoku is now the knife most commonly used in Japanese home kitchens and has spread all over the world as an ideal general-purpose kitchen knife. In the trainee chef ’s kit (see page 44) there is often a santoku included alongside the chef ’s knife.

The name is usually translated as ʻthree virtuesʼ or ʻstrengthsʼ but nobody can quite agree whether this refers to the ingredients it can be used on — fish/meat/veg — the cutting styles that it can be used for — mince/slice/chop — or the fact that it can serve many of the functions of the three traditional knives, the yanagiba, the deba and the usuba.” 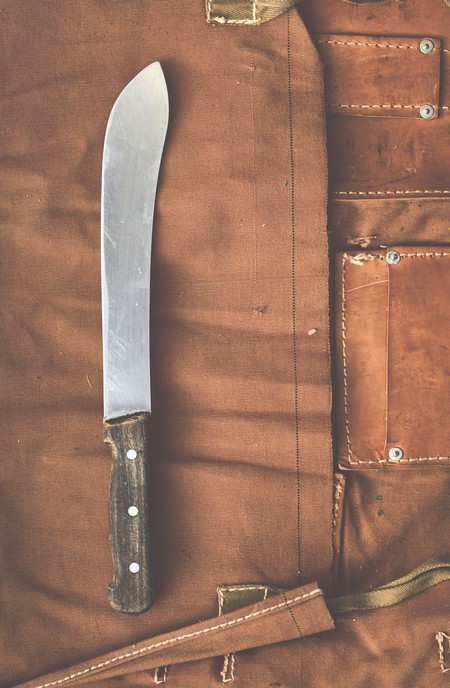 The Scimitar | Courtesy of Quadrille

USE: CUTTING CLEAN AND REGULAR SLICES ACROSS BONED MEAT

“The steak knife, or scimitar, is the stereotype of the butcher’s knife. It is long in the blade, for cutting across large muscle groups, and, like the yanagiba, for creating a fine surface on steaks with fewer pull/push strokes. The blade is massive enough to be wielded as a chopper through small or soft bones and broadens towards the tip, shifting the centre of gravity further from the handle and allowing it to be swung like a hammer. The shape of the tip also fits naturally to a second hand for pushing down evenly through tougher bones or joints.

The name ‘scimitar’ derives from a curved pattern of sword that pops up throughout Asia and the Middle East and refers to the curve on the cutting edge, which also enables it to be used in a rocking/chopping action to mince.” 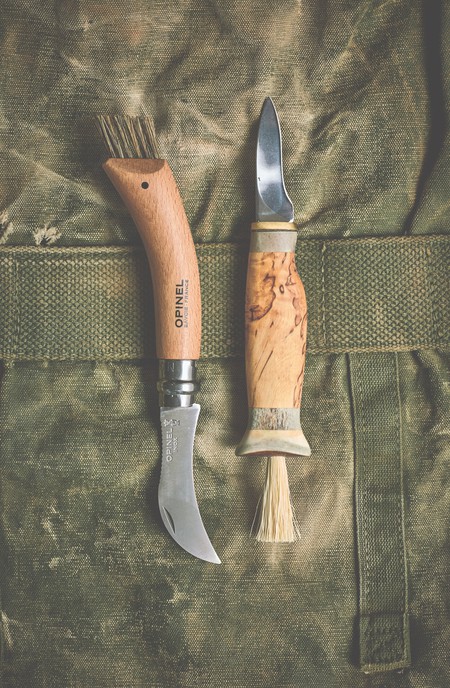 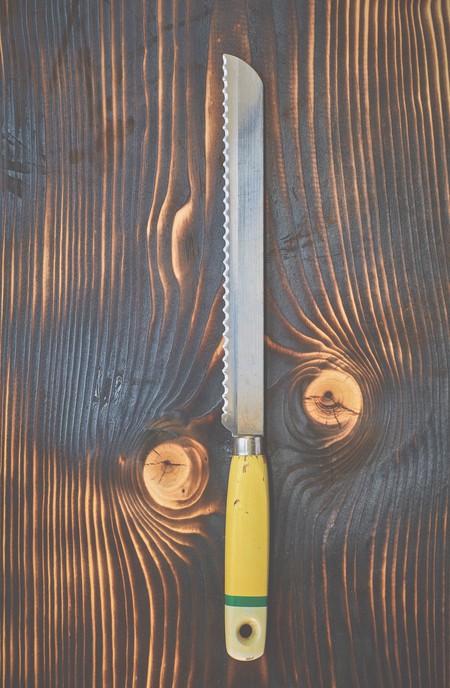 “Amid all the choppers, hackers and cleavers, the mushroom knife is a delicate little thing… and so it should be because the mushroom you’re harvesting is in fact only the fruiting body of a much larger organism, the mycellium, which remains underground. […] A mushroom knife has a short, sharp blade which is used to cut through the mushroom stem well below the soil surface and a delicate little brush that can remove any adhered dirt without disturbing the spores or damaging the gills.”

“We British cannot really claim the serrated bread knife entirely as our own but it’s not part of the classic French kit and there’s no requirement for it in Japanese cuisine. […] Fresh bread is difficult to cut neatly, but once it’s a day or so old it can usually be sliced with a regular long-bladed knife as long as you’re careful and the crust isn’t insanely hard. The serrated blade, though, means that pretty much anybody can saw a lump off any loaf and those fat, soft, white doorstops have become something of a cultural icon of British cuisine. Though it’s rarely a thing of beauty, the bread knife will be present in British kitchens even when there are no other half-decent knives to speak of.“ 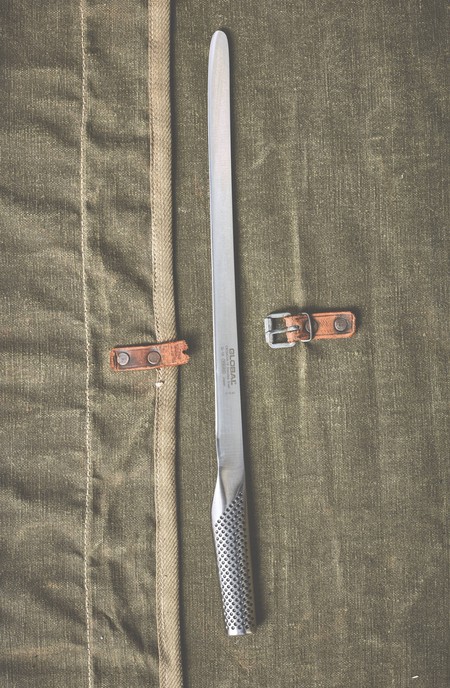 “Fine jamón ibérico on the bone and Scottish smoked wild salmon are both high-status foods that demand careful slicing as close as possible to the time of serving as well as a certain amount of tableside theatre; the long, thin, wickedly sword-like slicer is just the tool for the job. Like sashimi cutting blades, the slicer is long, allowing a slice to be taken with a single stroke and avoiding unpleasant ‘sawing’ marks on the cut surface of the food. The blade is flexible so it can be bent flat against the inside of the salmon skin at the end of the stroke. Because the blade runs parallel to skin and bone, it need never touch them, or indeed, the cutting board. A slicer, therefore, if used carefully, can be given a much more acute and ultimately sharp grind than other knives because it’s never going to be traumatised by hard stuff.” 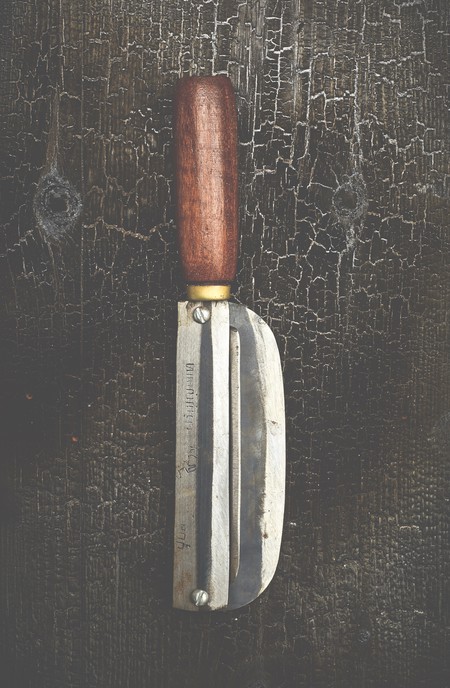 USES: PEELING AND SHREDDING HARD VEGETABLES AND FRUIT AT ROADSIDES OR STALLS

“The Dao Bao is a vegetable paring knife from South-East Asia and a perfect example of a global family of knives with a ‘guarded’ blade that controls how deep it can penetrate. In one sense this is the mechanism of a spiralizer or mandoline, mounted on a handle. Passing the knife along the surface of a hard vegetable produces a long ribbon of material – just like a simpler version of Japanese katsuramuki rotary cutting – which makes it ideal for reducing a challenging root into something that’s pleasantly palatable as a salad. It also, of course, makes it an ideal tool for fast, accurate peeling. In fact, the dao bao is a direct relative of your mum’s old-school potato peeler or even the commercial ‘speed peeler’.” 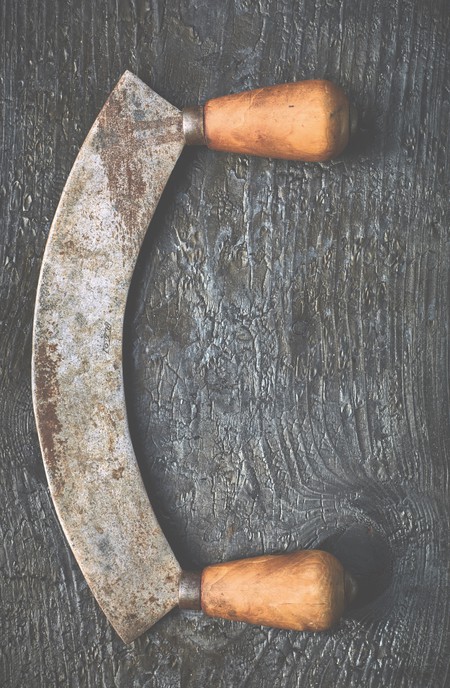 “Mezzaluna means ‘half-moon’, the Italian name for a two-handled semi-circular knife with a rocking action. Small mezzalunas* are usually reserved for chopping nuts, herbs and garlic and can have one, two or occasionally three parallel blades. There is also a version with a single handle, mounted in the middle of the blade that comes with a special dished wooden chopping bowl – sometimes called a ‘hachinette’. In this incarnation they fit into the nice-but-pointless class of kitchen gadgetry as they offer no advantage in terms of function or efficiency over a regular knife and are a complete pain to clean and store.

Larger mezzalunas though, single-bladed, substantial and sharp, can be used to mince meat. The French, in fact, call them ‘hachoirs’ and, because they operate with a downwards slicing action instead of the forced mashing and extrusion of the mincing machine, they produce a coarser mince with cuboid chunks that retain more juice. A hachoir will produce better steak tartare and far juicier burgers than any other tool or appliance.”