A History of London Bridge in 1 Minute

London Bridge is not the one you’re probably thinking of, that’s Tower Bridge. London Bridge is actually pretty subtle as far as London’s bridges go, it’s low slung and there are no fancy towers. But there’s always been a bridge between Southwark and the City of London dating back as far as the Romans.

Between Southwark and the City of London on the north shore the river estuary is much shallower so this was a natural place for the Romans to build a bridge to consolidate their new city, Londinium, which was where the City of London is now. When London declined after the Romans left, the river went back to being a natural border between the Anglo Saxon regions of Mercia and Wessex. 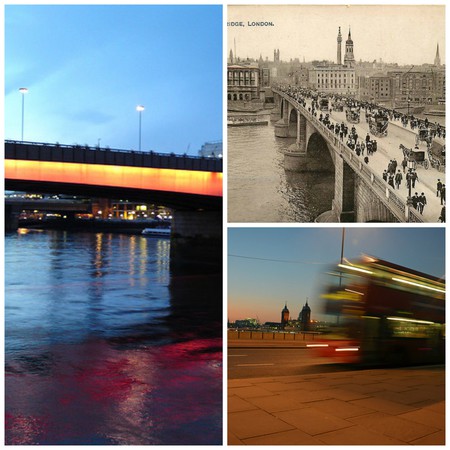 A stone bridge was erected in the 12th century – it took 33 years to build and had a chapel dedicated to Thomas Beckett, the Archbishop of Canterbury, placed in the centre. It was from here that pilgrims would set off for Canterbury cathedral. Originally it would have had a drawbridge to let ships through and shops existed on the bridge, which caught fire several times before the Great Fire of London. Several parts of the bridge collapsed over the years, leading to the famous nursery rhyme, “London Bridge is Falling Down”.

By the 16th century, structures shot up from the bridge seven stories high and crossing it in peak periods could take an hour. It was crowded, dangerous and smelly. Traitors and outlaws’ heads would be put on pikes at either end.

In 1799 the King decided to replace the ancient bridge and hosted a competition for new designs. Built by John Rennie the new bridge was opened in 1831 by King William IV but by 1896 it was back to being the most congested place in London, with over 8,000 pedestrians using it per hour. Thirty years later it started to sink.

The bridge was sold to an American in 1968 for $2,460,000 who moved it piece by piece to Arizona and had it rebuilt. Today’s low key London Bridge was opened by Queen Elizabeth II in 1983 and uses pre-stressed concrete girders.