A Guide to Lesser-Known Architectural Treasures in London

A Guide to Lesser-Known Architectural Treasures in London

© Peter Trimming / Flickr
London has a lot of big name attractions but its weird and wonderful history is best discovered through architectural gems that aren’t on most tourists’ bucket list. Let us guide you around a London hidden in plain sight.

Cemetery, Cathedral, Church, Park, Ruins
Map View
Discover one of the best views over London | © hotzeplotz/Flickr
Highgate Cemetery might hit it out of the park when it comes to famous burials, but overlooked Nunhead Cemetary has a wonderful Gothic style chapel. It was one of a series of ornate graveyards (called the Magnificent Seven) built on what was then the edge of London to cope with the booming population in the 19th century. Highgate was one, Nunhead (then called All Saints) was another. While it might not have the celeb graves, it does have a wonderful view over London to St Pauls.
More Info
Open In Google Maps
Nunhead Cemetery Linden Grove, London, England, SE15 3LP, United Kingdom
Visit Facebook page

Building
Map View
St Pancras International Station Clock, Euston Road | © SImon Pielow / Flickr
Ditch Big Ben and the thousands of selfie sticks for another clock tower – but this one has the added advantage that you can sleep in it. Lover of Victorian Gothic, George Gilbert Scott started building it in 1866 and had to scale down its height after the railway company ran out of money. Today you can stay in the tower, take in views over the city of London and even explore the tiny room where the clock used to be wound by hand.
More Info
Open In Google Maps
Euston Road, Kings Cross, London, England, NW1 2AR, United Kingdom
+442078437688
Visit website

St Dunstan's in the East

Bridge, Church, Park
Map View
Discover an ancient church amongst the flower beds | © James Stringer / Flickr
A few Gothic style ruins in the midst of a small public garden might not sound like an attraction but this ancient parish church survived the Great Fire of London in 1666, and was built 900 years ago. However, the church was bombed in 1941 in the Blitz and has remained standing as a testament to the wartime destruction of over a million homes.
More Info
Open In Google Maps
Dunstan's Hill, Billingsgate, London, England, EC3R 5DD, United Kingdom
+442073744127
Visit website

Park
Map View
Can you find the police station? | © Pixabay
Scotland Yard might be a household name but this tiny police station is a lot more fun. Even London old timers don’t know it’s there – in the southeast corner of Trafalgar Square, hidden in plain sight. It was built in the 1930s to keep an eye on the odd rowdy drunk (and the pigeons) in the square and although it looks like it might be a Tardis, there’s only room for one person standing inside. Sadly you won’t see a bobby here any longer, it’s now a cupboard.
More Info
Open In Google Maps
London, United Kingdom

Masonic Temple at the Andaz London

Masonic Temple at the Andaz London

Yes, yes, St Pauls has the Whispering Gallery but the St Andaz Hotel (adjacent to Liverpool St Station, a short walk from St Pauls) has a secret Masonic temple that’s over 100 years old. Originally the Great Eastern Hotel and one of the first hotels in London, the enormous marble covered room was discovered behind a fake wall when renovators moved in a few years ago. The Masonic lodge is one of the finest examples in London and features a blue and gold domed ceiling with zodiac and esoteric signs. 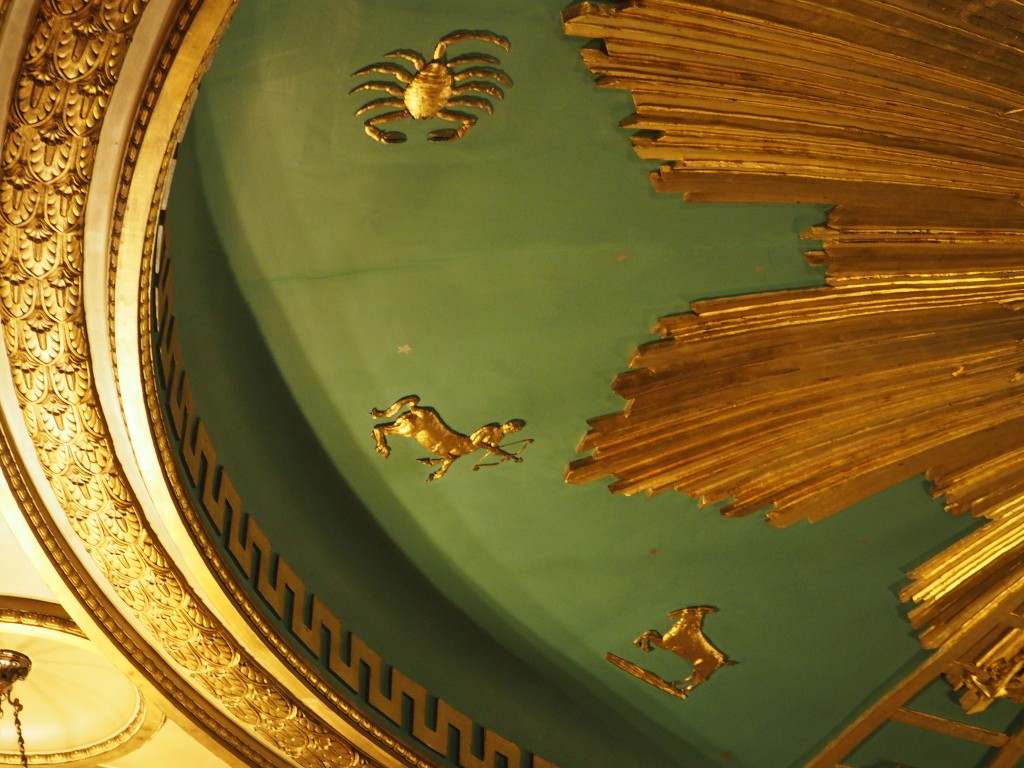 The ceiling of the Masonic temple | © Matt Lancashire / Flickr

Art Gallery, Museum
Map View
What lies beneath? | © Zoe Rimmer / Flickr
The Globe might have reconstructed an Elizabethan theatre but below the Guildhall Yard art gallery there lies an enormous 2,000 year old Roman amphitheatre. While the Roman find still lies beneath the courtyard, a semi circle black line was built into the floor to show where the ancient theatre lies.
More Info
Open In Google Maps
Guildhall Yard, London, England, EC2V 5AE, United Kingdom
+442073323700
Visit website

Building, Park
Map View
Is this the coolest car park in Britain? | © IanVIsits / Flickr
London has rather a lot of Brutalist architecture outside of the obvious example of the Barbican if you know where to look. One of the most surprising is a car park in Marylebone, on Welbeck Street. Its concrete polygons have been delighting modernism geeks since the 1970s but its future is in doubt after it failed to become a listed building last year.
More Info
Open In Google Maps
74 Welbeck Street, Marylebone, London, England, W1G 0BA, United Kingdom
+442033228946
Visit website

Theater
Map View
Wilton's Music Hall is the oldest in the world | © David Merrigan / FLikr
London’s last remaining music hall is the oldest surviving music hall in the world and you can bet your bottom dollar that it has had much more of a riotous past than the Royal Albert Hall. Originally five ale houses, the hall began as a concert room in the mid 19th century and was thought to be where the Can Can was first performed in London and then promptly banned. It now runs local gigs, magic and performance nights and has a lovely bar.
More Info
Open In Google Maps
1 Graces Alley, Whitechapel, London, England, E1 8JB, United Kingdom
+442077022789
Visit website