7 Things To Do In The Queen Elizabeth Olympic Park

With the Olympics in full swing in Rio, now seems as good a time as any to remind ourselves that even though the Games may have moved on, London still reaps the spoils of 2012. While other Olympic Parks around the world crumble and turn to dust (maybe a bit of an exaggeration) it’s so far so good for us, as our Olympic Park goes from strength to strength. Whether you want to enjoy a leisurely picnic, try your hand at beach volleyball and other sports, or test your metal on the world’s tallest tunnel slide, the Queen Elizabeth Olympic Park offers a fantastic day out.

Go on a cultural egg hunt

Aside from being home to world class sporting facilities, the Olympic Park has also striven to include a variety of art and culture in its design, from large-scale sculptures to subtler, harder-to find pieces, as well as a series of permanent poetry installed around the Park. Some standout pieces include the LFO spectrum by Carsten Nicolai, a huge, iridescent digital print representing the five Olympic rings as a low frequency oscillation sound wave, emblazoned onto a security fence by the Velodrome; the Steles, 35 crayon-looking coloured posts designed by Keith Wilson, which line a section of the Park’s waterways; and the History Trees, commissioned by British artists Ackroyd and Harvey — which sees ten trees adorned with large bronze or stainless steel rings that will fuse together over time as the branches continue to grow.

I love the vignettes around the Olympic Park.

Take a dip in the Olympic pool

One of the more spectacular Olympic venues built for London 2012 is the Aquatic Centre. Designed by late Iraqi architect Zaha Hadid in her trademark curved, fluid form, the Aquatic Centre houses two 50-metre Olympic pools and a 25-metre diving pool. Following the 2012 Games, the centre underwent extensive modification, with temporary spectator stands removed, before opening to the public in 2014 for the same entry fee as any other local leisure centre. 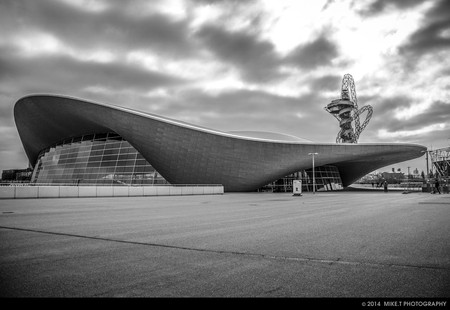 Take a tour by boat or pedalo

One of the Queen Elizabeth Olympic Park’s great achievements was the regeneration of Newham’s waterways, which were festering under the weight of decades of neglect. After experiencing a moment of glory as 900 million people watched David Beckham and the Olympic torch racing towards the Olympic Stadium during the 2012 Opening Ceremony, the waterways have remained a popular site for leisure and boating events. Today you can rent a pedalo or hop on a guided boat tour to explore the park in style. 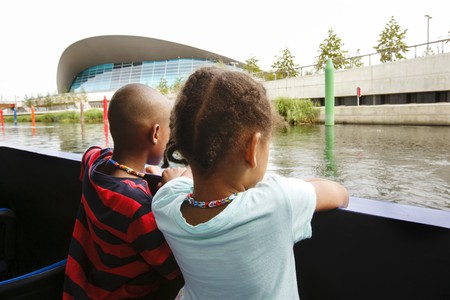 Enjoy a picnic on the banks of the River Lea

Hand in hand with the regeneration of the waterways came the landscaping of the Park’s riverbanks and canalsides. The River Lea in the north of the Park is bordered with expansive green spaces, with Hopkin’s Field (a four-acre grassy meadow sown with nectar-rich species of plant such as thyme and red clover) and a heart-shaped lawn that houses the Olympic Rings, being prime spots for a leisurely picnic. Alternatively, the south of the park houses beautifully manicured formal gardens such as the Great British Garden — which celebrates the British horticultural heritage around a theme reflecting the Olympic medals, with three gardens featuring bronze, silver and gold foliage and landscaping — and the 2012 Gardens, which feature 250 different species of plants from all around the world, arranged into sections themed around their particular hemisphere.

Go on a nature trail

The landscaping of the Olympic Park’s green space has also encouraged a wealth of diverse nature to return to the area. Aside from meadows filled with bee-attracting wildflowers, many of the Park’s waterways are now surrounded by specially designed wetlands, which provide a habitat to hundreds of birds, waterfowl and amphibians. The Park also offers a Biodiversity and Landscape Exploring Walk, with framed panels and plaques along the route to help you learn about the wildlife.

Have a go on the world’s tallest slide

After visitors to the Olympic Park showed a disappointing lack of interest in paying to ascend to the top of the distinctive ArcelorMittal Orbit sculpture, the Park’s operators got together and decided what the distinctive structure was missing was a bit of oomph, entertainment-wise. Now, Britain’s tallest sculpture, designed by Sir Anish Kapoor, is home to the world’s highest and longest tunnel slide. After you’ve admired the view at the top of the ArcelorMittal Orbit, hop on the slide and descend a thrilling 76 metres through a twisting, turning, vertical-drop-filled tunnel — all 178 metres of it. Gold medal for ingenuity deserved right here.

Take some time out at Beach East