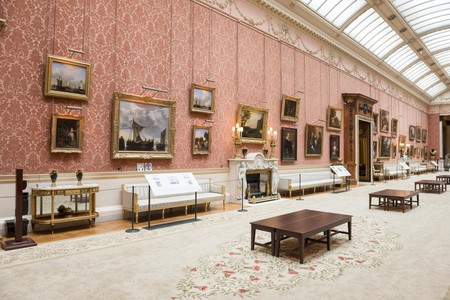 Of all the 19 State Rooms in Buckingham Palace, the Picture Gallery is one of the most impressive. It was designed by architect John Nash as part of George IV’s transformation in the 1820s, although the monarch didn’t live to see his vision completed. The 47-metre room was originally designed to display George’s collection, but it now exhibits some of the greatest works of art from throughout the Royal Collection on rotation and is currently focused on Italian, Dutch and Flemish works from around the 17th-century. Here’s a run-down of the must-see pieces.

Charles I paid £20 for this portrait of his wife, by the celebrated artist Anthony van Dyck. The artist was already celebrated across The Netherlands and Italy, but he found even greater fame painting the English royal court. This is supposedly his earliest, singular image of the queen, and features incredibly complex detail in the garments and jewellery. Van Dyck later favoured a more simplistic style and often omitted such intricacies.

This is one of two presentation oil sketches created by Rubens in order to secure a bid to paint the Assumption of the Virgin in Antwerp Cathedral’s high altar. This exceptionally complex sketch shows off Rubens’ talent for rendering flesh, as seen in the rosy pink folds of the cherubs aiding the Virgin Mary’s assumption into heaven after her burial in the Vale of Josaphat.

A Lady at the Virginal with a Gentleman – Johannes Vermeer, c.1660

Despite his worldwide acclaim, there are actually only 34 paintings by Vermeer in existence. This example typifies his masterful skill as a ‘genre painter’, depicting scenes from everyday life that evoke a certain level of intimacy and focusing almost obsessively on recreating light. His use of perspective undoubtedly places the woman at her virginal as the focus, despite having her back turned to us.

During his lifetime Guido Reni was known for depicting beautiful women in anguish, as seen in his image of Cleopatra’s suicide. Her body appears to emanate light, and her composed expression is more of contemplation than of sorrow or fear. Reni increased the dramatic tension by placing her illuminated body against an exceptionally shadowy background as if she is about to be swallowed by the eternal darkness of death.

Frans Hal had a brilliant ability to evoke striking, dominant poses full of fantastic vitality and expression. This unknown sitter holds a strident stance that fills the canvas as if he has just turned to face the artist. He holds his gloves in his right hand, which was considered a gesture of friendship (as opposed to being worn) and gives this ambiguous composition a more sociable air.

Rembrandt is considered the ultimate master of Dutch Golden Age painting, known for his incredible rendering of light and shadow and wholly confident, sweeping brushwork. His portrait of Agatha Bas was painted at the height of his fame, a year before he completed The Night’s Watch. This incredible picture blurs the boundary between image and reality, as Bas’s hand rests on a painted frame that mimics its real one, creating the illusion that she is reaching beyond the canvas.