20 Songs About London From The Punk And New Wave Era 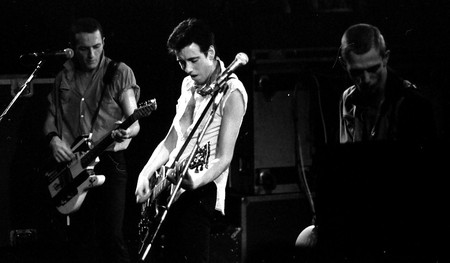 This year, London is celebrating 40 years of punk music, with a whole 12 months of gigs, exhibitions and films dedicated to punk history. Many of London’s venues, of course, played an important role hosting punk bands and the new wave groups that followed them, but it was far more than just an anonymous supporting character. With many of the bands hailing from the capital’s diverse boroughs, London itself was an important influence to the movement, inspiring some of the greatest punk and new wave tracks — here are just some of the classics.

‘The Guns of Brixton’ – The Clash

Written by bass player Paul Simonon, this reggae-influenced song from The Clash explored the rising racial tensions in Brixton (where Simonon grew up), just a couple of years before the Brixton riots of 1981, with youths growing increasingly alienated by growing economic inequality, police brutality and sky-high unemployment.

A track from The Stranglers’ debut album Rattus Norvegicus, ‘London Lady’ was written by vocalist and guitarist Hugh Cornwell (who hailed from Tufnell Park in North London) and released in 1977. According to bass guitarist Jean-Jacques Burnel, the track is not about any woman in particular, but rather ‘a kind of synthesis of lots of women’ the band were meeting at the time.

‘Down in the Tube Station at Midnight’ – The Jam

This controversial song by The Jam tells the story of a late night traveler who is casually assaulted on the tube by a gang of right-wing skinheads. It was released in 1978 and was banned from the airwaves by the BBC, with Tony Blackburn complaining about the punks’ apparent penchant for violence.

‘Up The Junction’ – Squeeze

The title of this 1979 Squeeze song is taken from Ken Loach’s 1965 TV play, and refers both to life in the largely working-class Clapham Common as well as to the colloquial expression meaning ‘to be in trouble’. The song is narrative in nature, telling the story of a young couple who have a baby but separate due to the man’s drinking.

This award-winning song from pop duo Pet Shop Boys was inspired in part by T.S. Eliot’s The Waste Land, and features a similar collage of voices. Inspired by class pressures in inner-city London, the song details working class men aspiring to get girls from the posh part of town.

One of The Smiths’ punkiest songs, the lyrics of ‘London’ describe a move to the capital from a small town, which has been interpreted as a reflection on the band’s own experiences relocating from Manchester to London — something that hadn’t been entirely well received.

‘The Liberty of Norton Folgate’ – Madness

‘A Rainy Night in Soho’ – The Pogues

Written by lead singer Shane MacGowan and released in 1986, ‘Rainy Night in Soho’ has remained one of The Pogues’ most popular songs to this day. Though a love song, it caused ill-feeling between MacGowan and producer Elvis Costello, who clashed over its final mix.

Part of Ian Dury’s debut album (the Blockheads are not credited on the album), which was largely considered to be one of the UK’s first classic punk albums, ‘Plaistow Patricia’ is about a young girl from a council estate background, and shocked non-punk fans with its explicit lyrics.

‘Red Skies Over Wembley’ – The Decorators

Short-lived post-punk band The Decorators released this mellow track as part of their debut 1982 album, Tablet. Sadly, they were to split just two years later, but are remembered fondly by their fans as one of the ‘great lost bands’.

Released as part of London band The Clash’s self-titled debut album, this 1977 track is thought to refer to speed, a popular drug in London at the time, as well as tapping into themes of alienation in the city. One of the band’s most popular songs, lead singer Joe Strummer would often change the lyrics during live performances, replacing London with the name of their host city.

This 1997 track from lyrical singer-songwriter Nick Cave and his band the Bad Seeds is a resplendent, romantic reflection on theism and religion, named after a magnificent neoclassical church in Knightsbridge. The album it features on, The Boatman’s Call, is one of the band’s most acclaimed to date.

This 1994 track features on the album Brutal Youth, which saw Costello reuniting with his band the Attractions after an eight year recording gap. ‘London’s Brilliant Parade’ is a nostalgic reflection on a London of yesteryear, exploring the gap between reality and fantasy, and a mini-travelogue featuring a host of London locations and icons, from the Routemaster bus to Camden Town and London Zoo.

A Chislehurst takeaway is the star of this 1978 track, which channels the anger felt by Siouxsie upon seeing right-wing skinheads harassing the Chinese staff with racist taunts. It’s now regarded not only as one of the band’s best tracks, but a classic in post-punk music.

This was East London band the Leyton Buzzards’ first single following their high-profile Battle of the Bands win with BBC Radio 1 and The Sun newspaper. ‘Saturday Night (Beneath the Plastic Palm Trees) is a nostalgic look back on North East London’s club nights in 1969, dancing to ska music, getting turned down by girls and discovering ‘heaven in the Seven Sisters Road’.

There aren’t many lyrics in this 1980 B-side track from new wave band Adam and the Ants. But those there are are about the famous Screen on the Green cinema and music venue beside Islington Green. The track was released with the hit single ‘Antmusic’.

‘We are London’ – Madness

Another track namedropping a huge host of London locations, ‘We are London’ featured on the album The Liberty of Norton Folgate. Taking us from Camden Lock to Chinatown, Old Compton Street to the iconic Roundhouse venue, this anthem calls for unity between all Londoners — ‘Can we make it if we all live together as one big family?’.

A heavily reggae-influenced track that threw many of The Clash’s fans, ‘White Man in Hammersmith Palais’ reflects on a disappointing night members of the band experienced at a reggae night in the iconic Hammersmith venue. It devolves into a wider discussion about social injustice in Britain and promoting unity between youths of different races.

Punk rock band the 999 (who, still going strong today, are one of most enduring punk era bands) released ‘Tulse Hill Night’ in 1978 on their second album, Separates. It laments the monotony and boredom for youths living in a South London borough of the 1970s, stuck inside with their best friend, the telly.

Not to be confused with the Morrissey song of the same name, ‘Dagenham Dave’ tells the tragic tale of The Stranglers’ earliest fan. After seeing the band perform in a Fulham pub, Dave — who was a well-read labourer with strong socialist principles and a great love of music — would make a point of following them to every gig, supporting them and even putting them up in his hotel. Sadly, Dave committed suicide by jumping off of Tower Bridge in 1977, just before his beloved band hit the big time.