13 Quirky and Unusual Things to Do in London 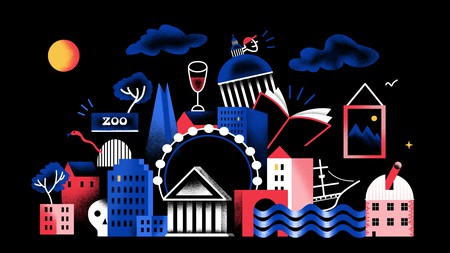 With nearly 2,000 years of history and a vibrant cultural life, London has much more to offer than just the usual big-ticket attractions. From temples to taxidermy and from museums to monsters, uncover the best unique, quirky and unusual things to do in the city.

Go on an outdoor art walk at The Line 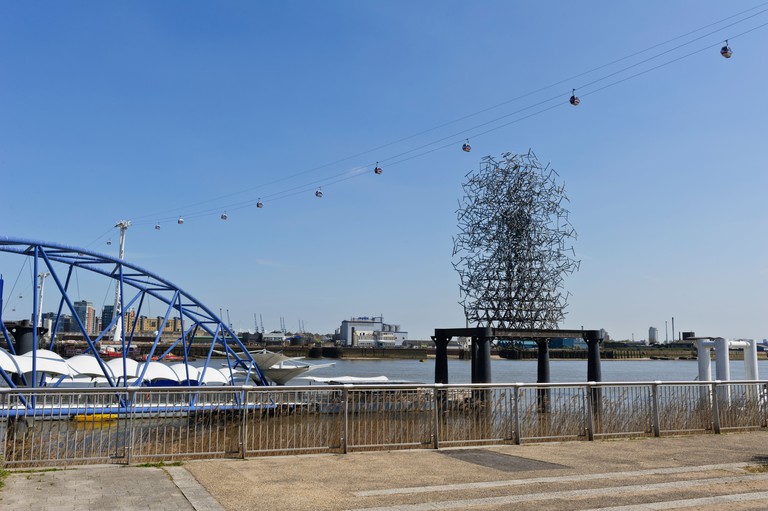 The Line, which stretches from the fresh green spaces of the Queen Elizabeth Olympic Park in East London down to The O2 in Greenwich, unveils a host of exciting public artworks along the Meridian Line. It’s the perfect way to get some exercise, see London’s waterways (you cross the Thames in a cable car at one point) and enjoy works by artists including Damien Hirst and Antony Gormley. The whole walk takes about two and a half hours, and there’s plenty to see along the way.

Drink coffee in a Victorian toilet at the Attendant 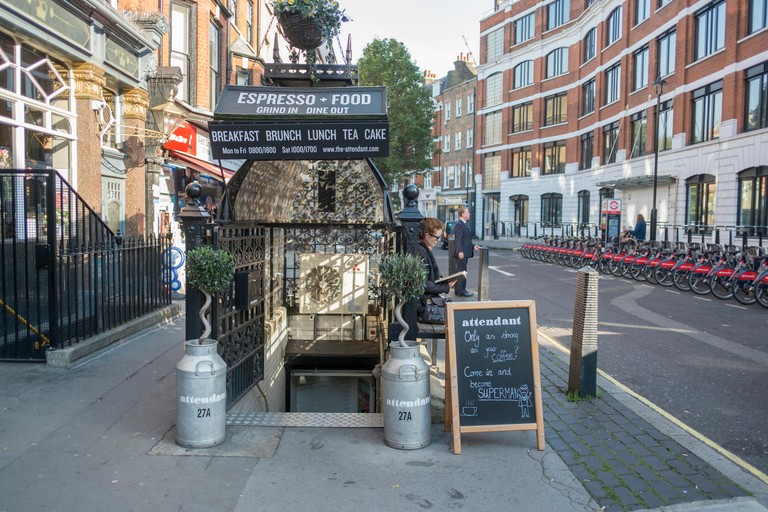 The Attendant is a Victorian toilet that has been converted into a quirky café in Foley Street, London | © Martin Williams / Alamy Stock Photo

The Attendant has a number of cafés in the city, but it’s the Fitzrovia one you’ll want to visit. In Victorian times the space was a public toilet, and the old urinals are now a main focal point of the interior (but don’t worry, they’ve been cleaned). The beautiful wrought-iron entrance is another reason to visit the café, which looks so authentic that baristas say they regularly have to turn away people who think it’s still a functioning public toilet.

Pump up the history of Soho 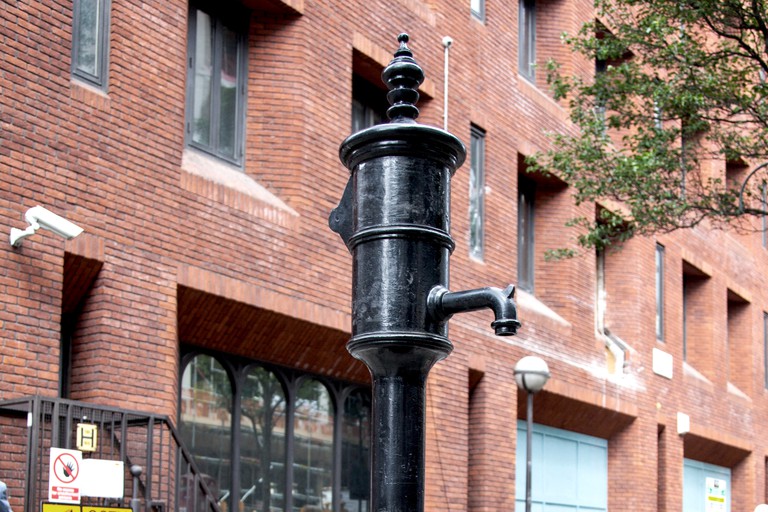 Blink and you’ll miss the water pump in Soho that helped to cure cholera. The water-borne disease caused mass fatalities in London, until local doctor John Snow traced an outbreak back to this pump in 1854. Before this, people believed cholera was transmitted through the air. Pop into the John Snow pub nearby to raise a pint to the good doctor. 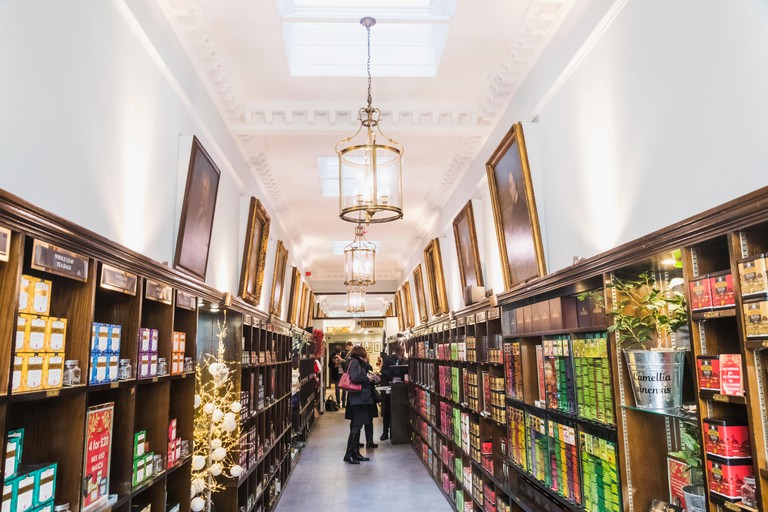 The Twinings Store, The Strand | © Steve Vidler / Alamy Stock Photo
No one loves tea more than the Brits, right? London used to practically run on the stuff and the Twinings Café on the Strand has seen some changes since it opened in 1706. Twining was one of the first merchants to bring tea to the UK and it’s been providing the royal households with brews since 1837.
Open In Google Maps
216 Strand, Holborn, London, England, WC2R 1AP, United Kingdom
+442073533511
Visit Website
Give us feedback 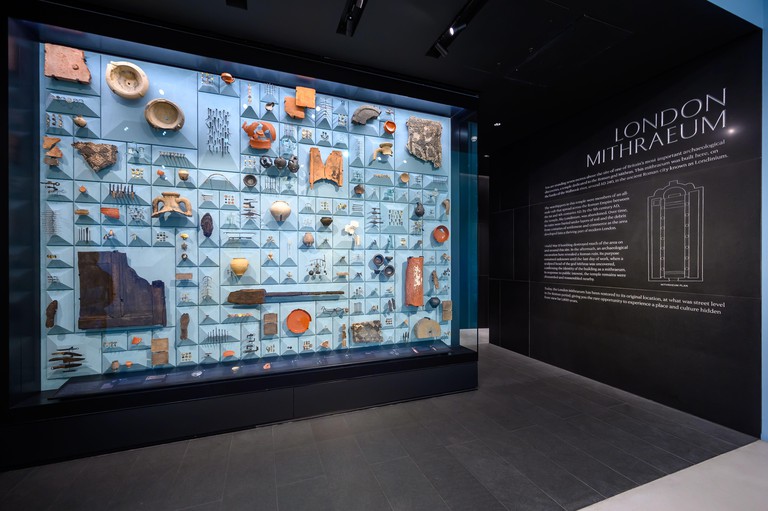 London dates back nearly 2,000 years and was already a town before the Romans descended on Britain. They made it a fortified city and brought their mystical beliefs with them. The temple of one of their gods, Mithras, was discovered in 1954, and today the London Mithraeum has its own museum below Bloomberg’s European headquarters. The temple has been restored to look the way it did when it was first excavated, and is showcased in a presentation that uses lighting design, audio recordings and haze. Entrance is free but booking is essential.

Bask in neon lights at God’s Own Junkyard 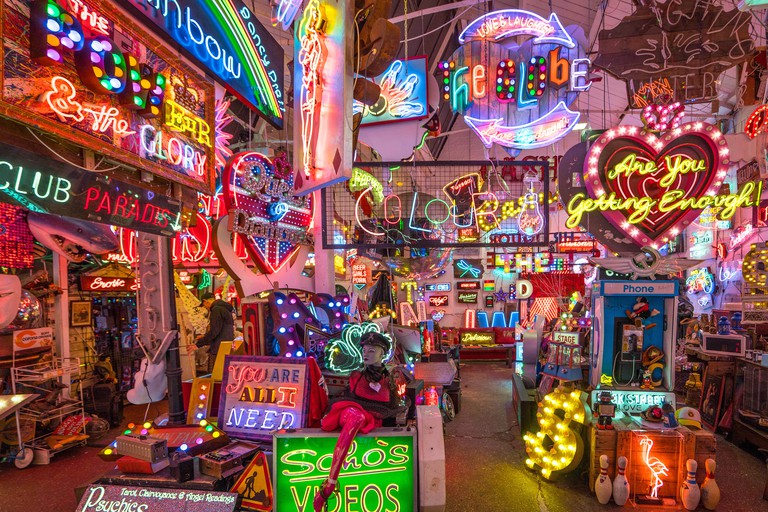 East London’s psychedelic God’s Own Junkyard is a treasure trove for anybody fascinated by neon signs. The gallery, which is located on an industrial estate, contains everything from old Soho sex-shop signs to props used in fashion shoots. Walking around the colourful space is a truly cool experience; it’s one of the more Instagrammable places in London, and has its own café, The Rolling Scones Café. God’s Own Junkyard is only open at weekends and entrance is free.

Kayak on the Thames 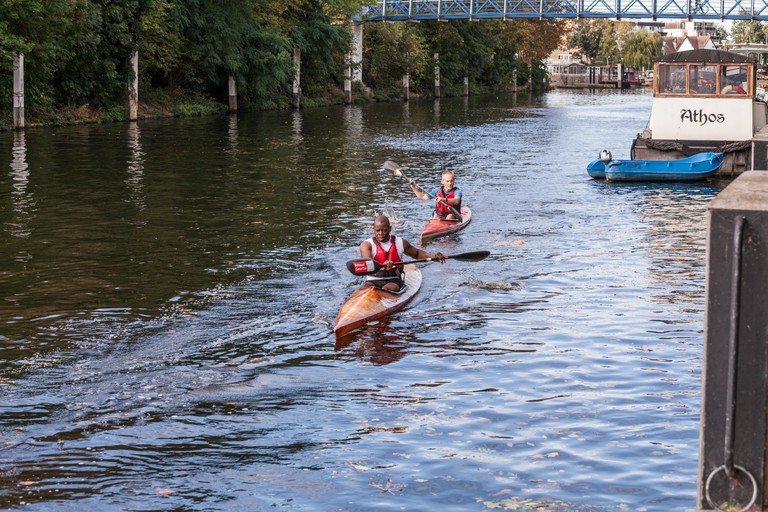 Why not try a spot of canoeing on the River Thames? | © David Dixon / Alamy Stock Photo

It might look murky and you definitely wouldn’t want to fall in, but kayaking is a fun way to get up very close to the iconic London river. Kayaking London take out small groups every day around the Houses of Parliament or in Little Venice in Paddington.

Get spooky at the Hoxton Street Monster Supplies 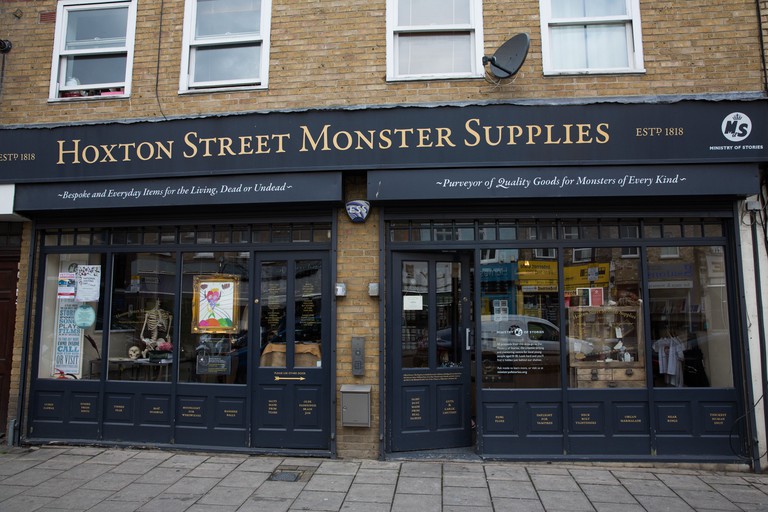 It’s Halloween all year round at the Hoxton Street Monster Supplies, run by the charity Ministry of Stories, which encourages children to write. The shop has everything you could want – salt made from tears of sorrow, cubed earwax (fudge) and jars of daylight (a solar-cell LED light) – for ‘the monster in your life or afterlife’. A great place to visit if you want to find unusual gifts and support a good cause at the same time.

Spot some of the world's best street art 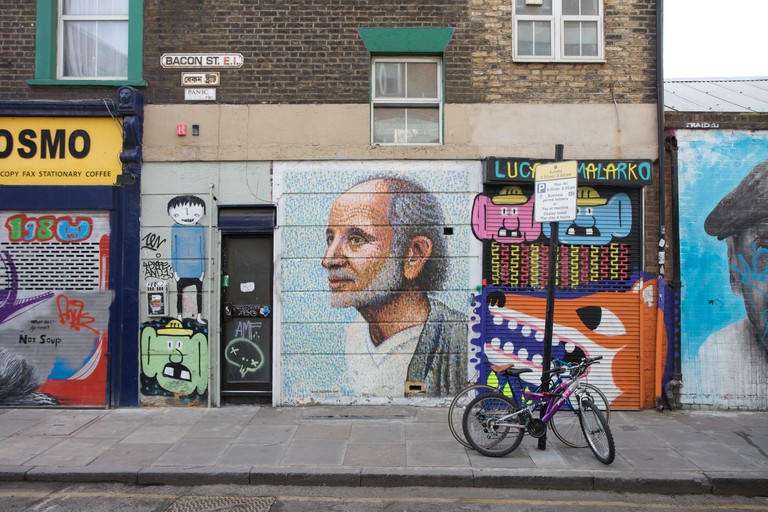 Graffiti covered buildings Bacon Street, off Brick Lane | © Mark Henderson / Alamy Stock Photo
Book Now
East London has been a hotbed for some of the world’s best street artists for the last couple of decades. While street art comes and goes, the streets around Shoreditch and Hackney are awash with colour and life. If you’re not sure where to start, book a street-art tour.
Open In Google Maps
Shoreditch, London, United Kingdom
Visit Website
Give us feedback

Nose round the oldest prison in England 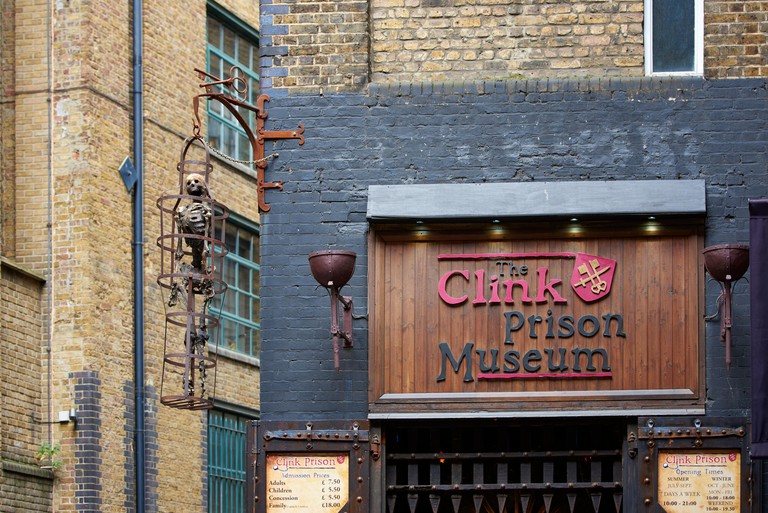 The Clink prison museum | © Nando Machado / Alamy Stock Photo
Book Now
The Clink Prison Museum, just off the South Bank, has a long history of locking people up. The clink (a nickname for ‘jail’) operated from the 12th to the 18th century. Today you are free to leave, but not before being shown round by actors in costume who bring the grisly past to life.
Open In Google Maps
1 Clink Street, London, England, SE1 9DG, United Kingdom
+442074030900
Visit Website
Give us feedback

Swim in the open air at Hampstead Heath ponds 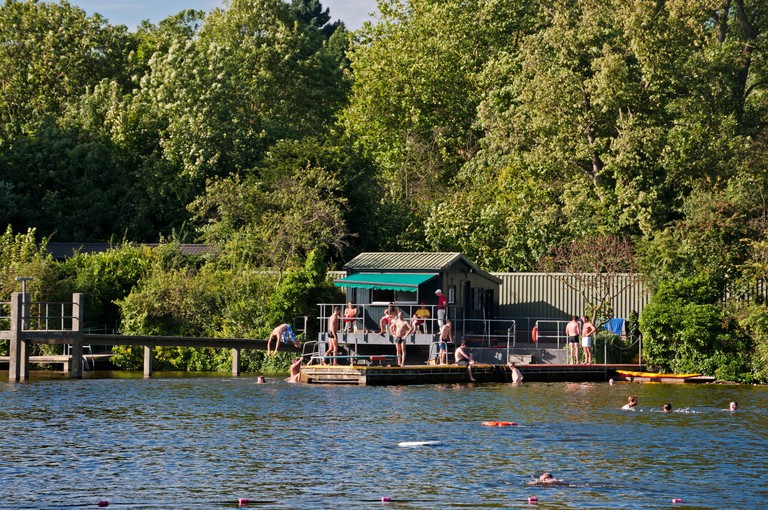 London has a surprising number of outdoor pools and lidos that are perfect for both warm summer swims and brisk winter dips. Some of the best can be found on Hampstead Heath, where the bathing ponds and the lido are open for swimmers all year round. Taking in the wilderness in the middle of London with an early morning swim is a lovely, calm way to exercise and get back to nature. Opening and closing hours depend on the season, so make sure to check the website, but the ponds normally open at 7am. 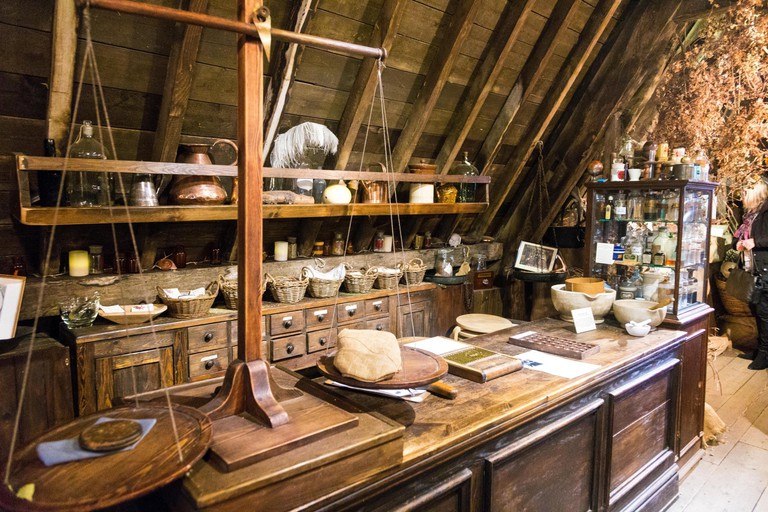 The Old Operating Theatre Museum in South London is exactly what it sounds like. The charity showcases how surgeries were made before we had anaesthetics and antiseptics, and the attic space also houses herbs that were used for medicines. It’s a fascinating place to visit, and makes you very grateful for modern medicine. If you want to get a real feel for how operations were done in the 1800s, there are surgical demonstrations every weekend. 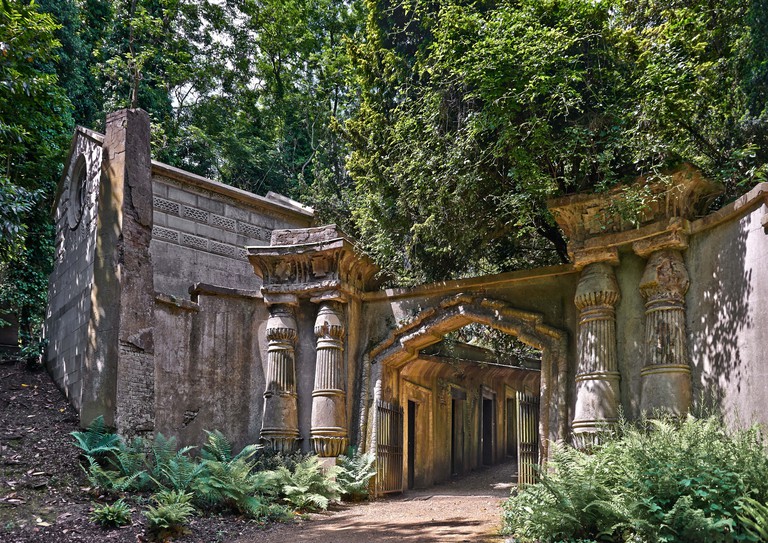 Staying for the evening? Check out these cool and unusual bars in London.