10 Reasons Why 'Sherlock' Is Terrible TV

It was fitting that the most recent episode of Sherlock featured extensive scenes in an aquarium. As many viewers pointed out, suggestions that the show had “jumped the shark” were perfectly apt.

Having seen the series from the very first episode back in 2010, and repeatedly given it the benefit of the doubt, I have to finally admit defeat. The modern day re-imagining of Sir Arthur Conan Doyle’s imaginative and well-loved novels just isn’t working anymore. In fact, it’s trashy TV at its worst… and here are ten reasons why.

You might also like: The Rock is the biggest movie star in the world… and he should quit acting now

Once the show’s biggest selling point, Benedict Cumberbatch is now too big for the role. He was an inspired choice at first—a quirky character actor whose angular features went against the grain of what was considered “conventionally handsome,” and yet somehow embodied a fresh take on the well known character.

Cumberbatch and his legion of fans (known as Cumberbitches),no longer see themselves as part of the detective show. Instead, its plots seem to exist just to get the Doctor Strange actor in a swooshing coat and a series of meme-friendly poses. Look, there’s Sherlock extolling the virtues of ginger nut biscuits. Oh, and now here he is arguing with a baby. Oh my, and he has a cute dog along for the ride…. quick, someone get me a gif.

It’s tediously sketched-out fan-service, and it has driven away all but the most dedicated elements of Sherlock fandom.

And speaking of coats…

Too many Mind Palaces

In all honesty, I could just list all ten of my major gripes as being entirely focussed on the overuse of the terrible ‘Mind Palace’ gimmick.

Initially, visual clues indicating just how Sherlock was cracking those impossible cases were a welcome addition to the show. We would get the odd word flashing up on screen here, or a subtle cue there, and the rest would be actual detective work we could follow—or at the very least enjoy while pretending we understood what was going on.

Unfortunately, we now get to spend far too much time in Sherlock’s mind, as he battles his demons and still comes out on top. It’s now so bad that there was even an entire episode (on which we will get to shortly) spent in the Mind Palace, made with the duel objectives of getting Sherlock and Watson into Victorian costumes and resurrecting Moriarty. Speaking of which…

I was all for killing off Andrew Scott’s take on Moriarty when they did it at the end of the second season. Personally, I thought his over-the-top delivery was infuriating and made the show a chore to watch at times.

That said, there was no denying that as an antagonist, Moriarty certainly kept Sherlock on his toes—Cumberbatch sparked off Scott to great effect. The detective’s apparent death in ‘The Reichenbach Fall’ was a huge talking point, and we were left wondering just how Sherlock could come back. Sadly, the producers not only botched his return at the start of season three, but also went back on killing off Moriarty.

If he’s not popping up in the godawful Mind Palace sequences, then he’s delivering messages from beyond the grave like some sort of slasher movie villain who refuses to stay dead.

Any sense of jeopardy or danger in the promise that characters could meet a sticky end is utterly undermined. We now have to take every death on the series with a pinch of salt, similar to how the deaths and subsequent resurrections of Avengers characters such as Nick Fury and Agent Coulson are now hampering the Marvel Universe.

Never Living Up to its Own Hype

The aforementioned ‘Reichenbach Fall’ episode set up a genuinely fascinating puzzle that had fans theorising for over a year. We were promised a full explanation as to just how Sherlock survived a seemingly fatal fall off the side of a high-rise building, witnessed by Watson.

There was plenty of fun to be had at the start of the return episode too, as Watson (played by Martin Freeman) was the focus of the show for an all too brief period of time.

Then Sherlock comes back, fobs us off with some utterly ludicrous explanation, which he immediately admits is a lie, and leaves us all bemused. It was a move to second guess the Sherlock fandom and act as if the show is smarter than they are. In truth, the hype surrounding the return of Sherlock was too great an opportunity not to exploit, and so we were fed red herrings as if they were hearty meals of exposition.

We got the same when Moriarty returned from the dead at the end of season three, and yet we remain none the wiser as to what is going on.

What exactly is the point of developing a show to be a ‘modern’ reworking of the classic, if you are then going to forget all about the modern setting? Sure we get to see some technology used, Sherlock is apparently glued to his phone, either tweeting his whereabouts or playing Angry Birds, but what about London? One of the biggest characters in Doyle’s original books, Baker Street and its immediate surroundings have virtually no place in the series.

Also, just what is the setting of the show? Is it the real world, or is Sherlock operating as some sort of superhero in a fantasy realm? His self-diagnosis as a high functioning sociopath just doesn’t cut it when you think back and remember that this is a man who can survive a point blank gun shot by analysing all the variables in the nano-seconds it takes the bullet to leave the barrel and hit him in the chest.

Sherlock is overpowered in his own universe, much like Superman in Metropolis… he is just too good, and that makes him very bad.

Martin Freeman’s Watson is a joy to watch. His performance is a deadpan continuation of the actor’s portrayal of Tim from The Office, but with even more heart and likability. Given how much of an unbearable snob Cumberbatch’s Sherlock tends to be, he is an essential part of the show, keeping things somewhat grounded.

The first few episodes were keen on developing this relationship, and toying with the idea of a mutual attraction of sorts. Of course, we knew nothing physical would happen, but the frisson was there.

Overriding the “bromance” was the fact that John Watson was an active member of the team. He brought something to the table, and made Sherlock tick. Even when we were introduced to John’s future wife, we accepted the detective duo would continue. And following an admittedly very well thought-out wedding episode, we did get a Watson and Sherlock pairing… only now John was sidelined and literally left holding the baby, as it was revealed his wife was actually a former secret agent, more Bourne than bride.

We welcomed the addition of a strong female character, diversity in general is another issue the series has struggled with, but this was a forced twist with no merit.

Each episode is too long

If this were a normal crime mystery show, then the 90 minute runtime would be perfectly fine. Unfortunately, as we’ve already seen, the actual cases that Sherlock is assigned are secondary to the “cult of Cumberbatch,” and so an hour and a half feels like an unnecessarily lengthy period of time to be stuck with a massive show off.

If Sherlock ever pulls out his violin, make sure he hasn’t barricaded the exits first.

Each series is too short

The flip side of each episode feeling too long, is that each series ends up being too short. There is a frenzied burst of activity for a three-week period at the start of every year, and then virtual silence for the next 11 months.

As previously suggested, the series uses this time to drip feed salacious teasers and on set pictures to fans, who then go on to build up unrealistic expectations about what they will eventually get.

It’s here that a traditional structure (usually a minimum of six episodes in the UK), is most seriously felt. Building a series-long arc is impossible within the limited time frame. Can you imagine some of the shocking revelations in Westworld being crammed into the space of a few days?

The nadir of Sherlock arrived last year with this one off special that proved producers were willing to sacrifice everything they once held dear for the sake of paying lip-service to the dwindling number of hardcore fans.

Set in the late 19th century, Sherlock Holmes teams up with Dr. John Watson (Cumberbatch and Freeman in more traditional character attire) to solve a paranormal-tinged mystery. It later emerges that this whole episode is set in Sherlock’s mind as he is boarding a plane as a consequence of his decision to murder his latest adversary. 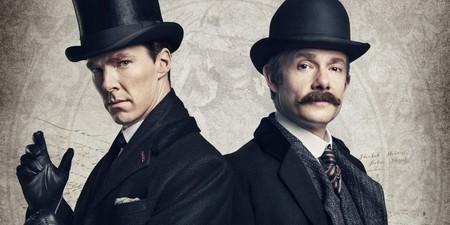 It should have been a decision that had real implications on the characters, but once again it was swept aside in favour a quick fix and internet-friendly images.

There is plenty of Sherlock to be had, but not enough Holmes.

The original character, as described in the books, is obviously a distant memory, but even the sleuth with a flare for the extravagant we first met in 2010 is now but a mere faded image.

Instead Benedict Cumberbatch has gone on to mega-stardom and brought that baggage with him into the series. It’s not really his fault, fans take their favourites and curate them the way they want to, but the writing of the series has seriously suffered as a result.

The crime-solving element is lost in a blur of meaningless words and self-aware nods to the camera, with the big reveal at the end of most episodes inducing yawns rather than gasps.

It’s time to end this show and kill the hype machine once and for all.

Sherlock season 4 continues on BBC over the coming weeks.