10 of the Most Beautiful Mews Streets in London 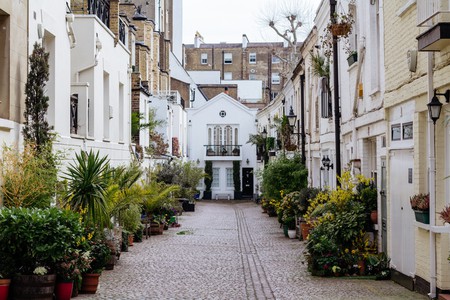 London’s mews were created to house the coachmen and horses that served the Victorian and Georgian elite of nearby mansions. These once humble lodgings are now some of the city’s most sought-after real estate, with the likes of actor Michael Caine and singer Madonna owning these petite properties. Here are 10 of the prettiest and star-studded mews streets London has to offer.

With 65 properties, Bathurst mews is one of the largest in London. Nestled among the streets of Bayswater, it remains true to its historic roots as it houses the last two riding schools in Central London. The stables have been in constant use since the 1830s except for a short period during World War II when they housed motorcars instead. The terraced houses and cobbled street survived the Blitz, narrowly escaping the effects of a bomb that devastated nearby Westbourne Terrace. Bathurst Mews and its equine residents are a nostalgic reminder of how these places once looked and were lived in. 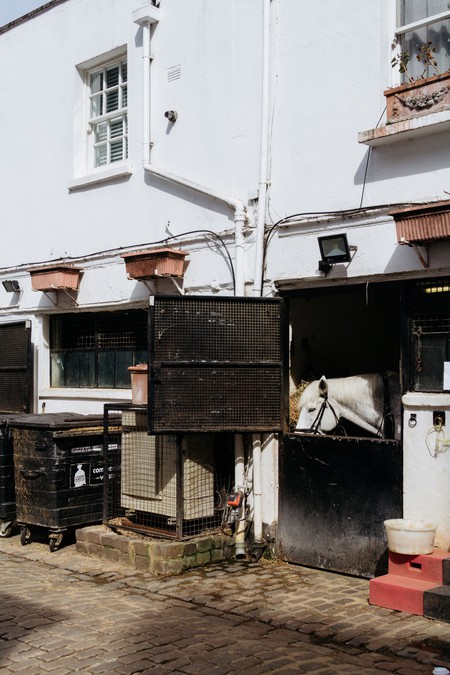 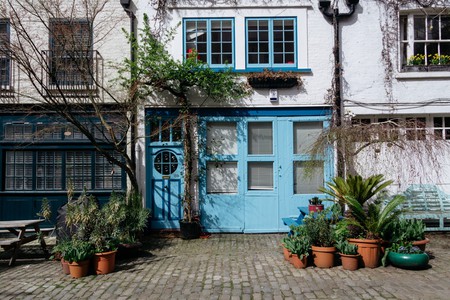 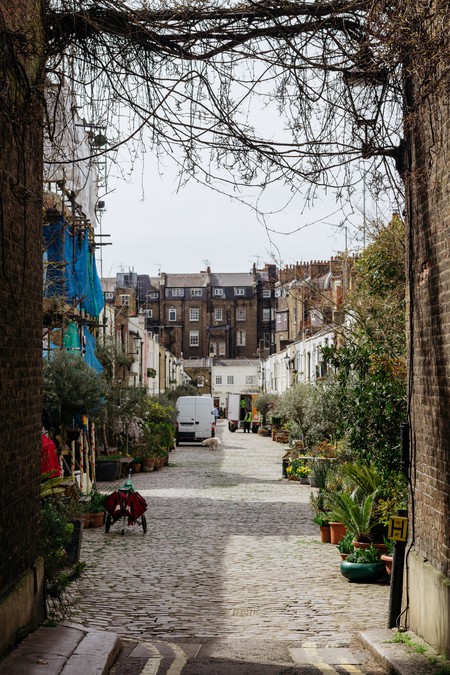 The entrance to Warren Mews is regularly snapped by visitors and passersby thanks to its distinctive entrance. This black-painted beauty with trailing greenery belongs to esteemed gallery owner Rebecca Hossack, who is famous for championing aboriginal art. It’s worth popping into her art galleries on nearby 28 Charlotte Street and Conway Street, both of which are under a 10-minute walk from the mews. If you’ve got time, make a detour to Wimpole Mews, which is slightly further away. It was thrown into the spotlight during the 1960s due to the Profumo affair, a sensational political scandal, which involved the secretary of state for war, sex and a Russian spy. 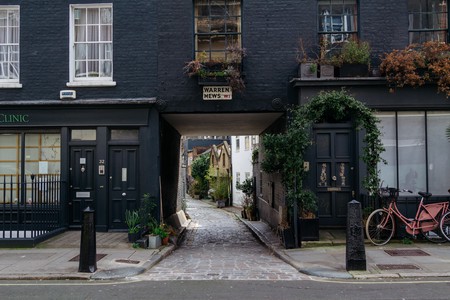 This cobbled street was home to famous crime novelist Agatha Christie, who purchased her idyllic double-fronted mews house in 1929. She loved her home at number 22 so much that it inspired her book Murder in the Mews (1937), arguably one of her best short stories. She made a few alterations to the house, including the writing room perched on top of the original 19th-century property, which has views over the gardens of the ‘The Boltons’; one of Britain’s most expensive streets. 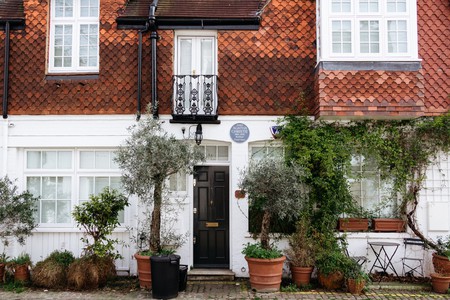 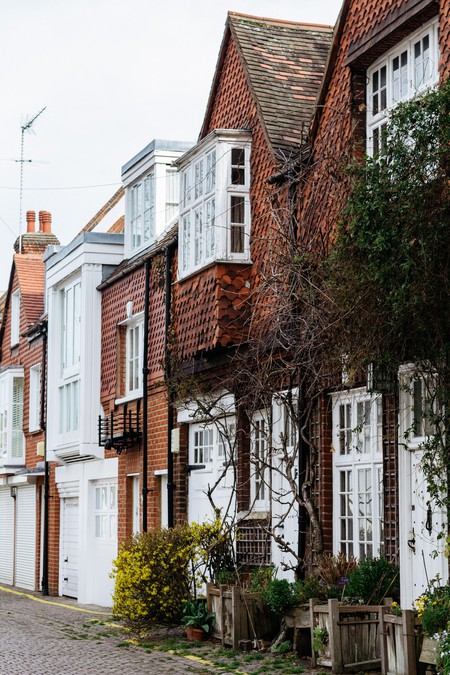 For a totally Instagrammable backdrop, head down Colville Mews where you’ll find the Union Jack-clad Temperley London store, the first boutique for Alice Temperley‘s bridal collection, that opened in 2000. If you’re in the mood for a spot of window shopping, you’re in luck – the mews is just off of Notting Hill’s well-heeled shopping district consisting of Westbourne Grove and Ledbury Road. It has a vast array of high-end independent and designer boutiques to choose from. 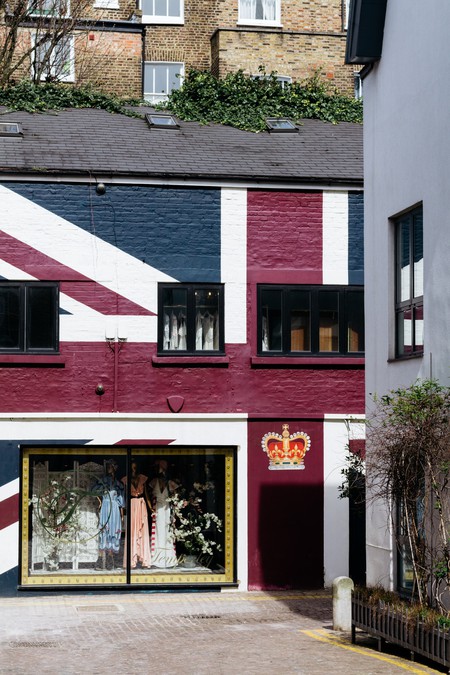 Queen’s Gate Mews was the location of London’s first-ever petrol pump – since then it’s become a star-studded street with the likes of Madonna and Guy Ritchie living there. It has also been used in the filming of Matthew Vaughn’s Layer Cake (2004) and The Bank Job (2008) starring Jason Statham. The mews also has a hidden gem tucked away on the corner, The Queen’s Arms, a quintessentially British pub that boasts original features including a toasty open fire and dark-oak panelling. 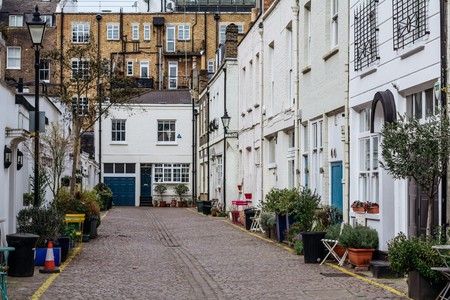 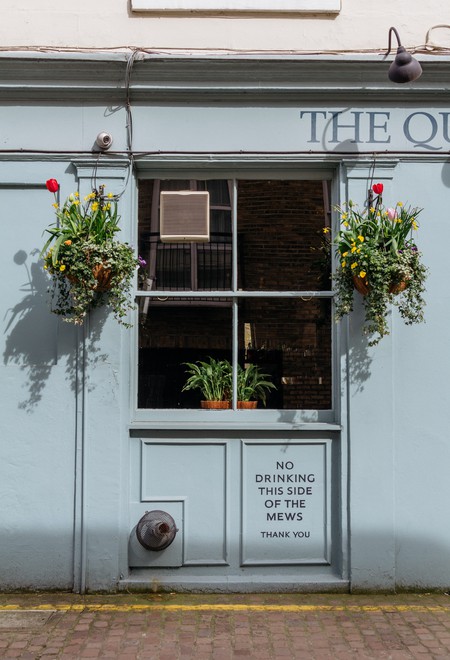 Just a 10-minute stroll down Gloucester Road from Queen’s Gate Mews is probably the prettiest of the Stanhope mewses (there’s also Stanhope Mews East and West). The street is a stone’s throw from London’s ‘golden triangle’ of museums – the Natural History Museum, the Science Museum and the V&A. This cream-coloured mews with its pretty cobbled street and plant-laden pavements is at its best in the spring and summer months, surrounded by grand terraces and garden squares that are also within Kensington’s Queen’s Gate Conservation Area. 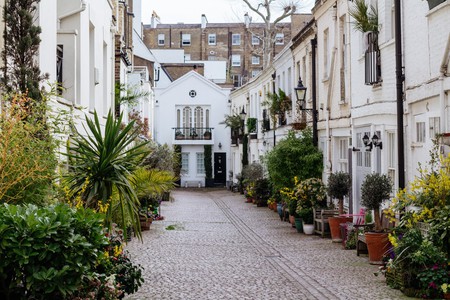 Pretty much all of the houses on this residential street are Grade II-listed and it’s one of the best-preserved mewses in London. With its own archway just off the lovely Holland Park, this quiet mews has many of its period features still in tact, including the wrought-iron stairwells leading to terraced balconies, original sash windows and even its own water pump. 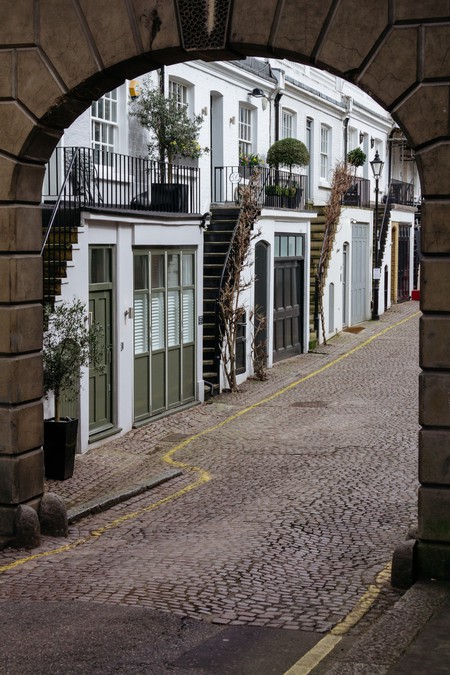 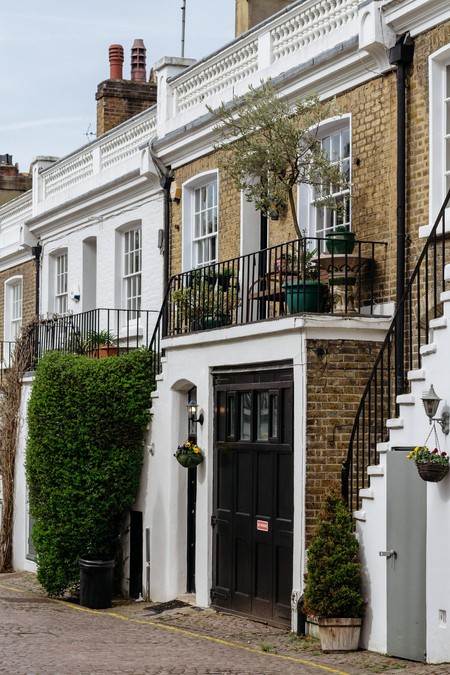 In the 1969 film The Italian Job, Michael Caine appeared on screen driving down Denbigh Close with his blonde-bombshell girlfriend, who had picked him up from prison in a stolen ambassadorial car for a cheeky welcome-home celebration. Caine has owned multiple mews houses in his lifetime, with one on nearby Albion Close selling recently for around £5 million. Denbigh Close is just off of Portobello Road Market, made famous by another great British film, Notting Hill (1999). 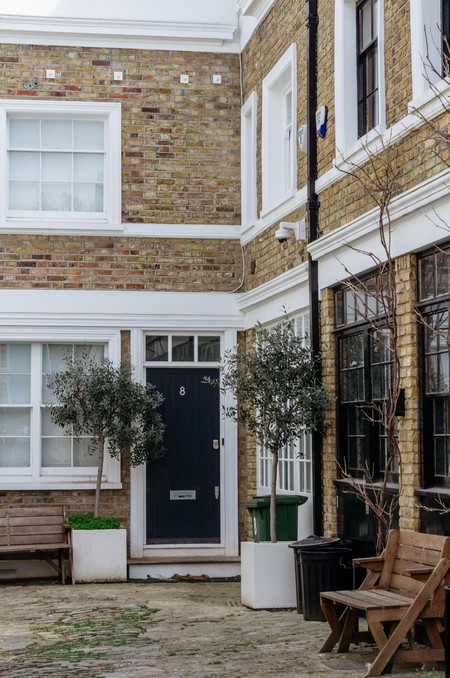 Another spot for film buffs is the enchanting St Lukes Mews, just a 10-minute walk away from Denbeigh Close. Head to number 27 and you’ll find the pink house that features in Love Actually (2003) where actor Andrew Lincoln declares his love for Keira Knightley‘s character Juliet. Just like many of the other mews around London, this one sustained bomb damage during the Blitz, but remains one of the prettiest in the city. 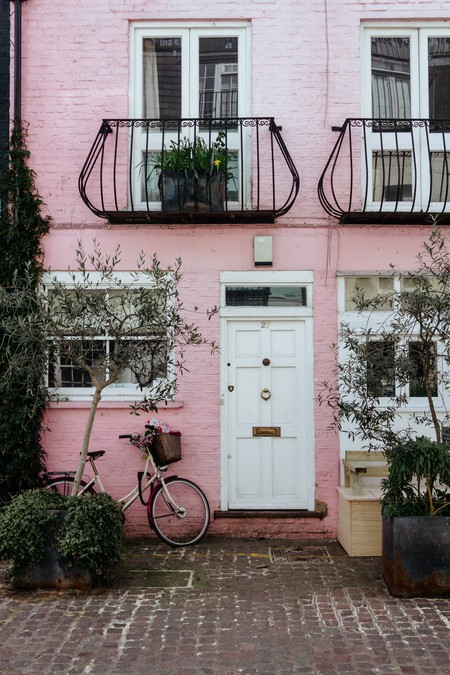 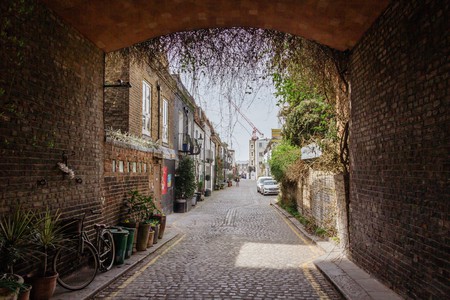 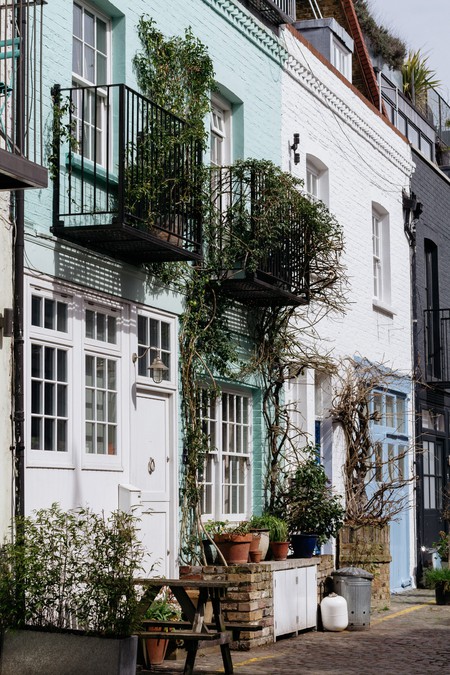 They say save the best until last, and Kynance Mews in Victoria Road Village has certainly established itself as one of the most desirable mews in London. The entrance is flanked by stone archways, the stunning 19th-century cobbled street is home to a close-knit community that proudly controls its upkeep. Pretty wisteria and roses climb its multicoloured walls and lush greenery lines the pavements. What’s more, just adjacent from the mews is Christ Church Kensington, with a lovely lavender garden that’s perfect for a quiet spot to read a book or enjoy a picnic during the summer. 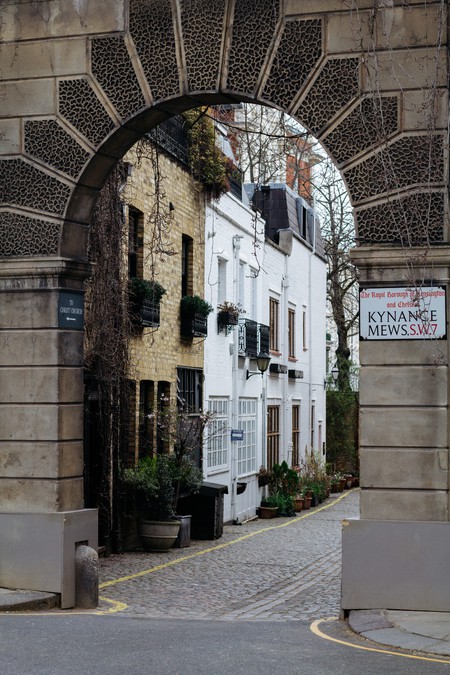 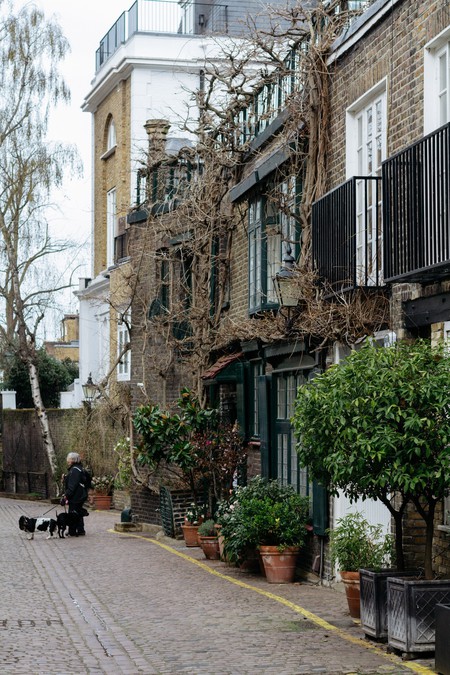 Want to see more pretty streets in London? Check out the city’s most Instgrammable spots here.