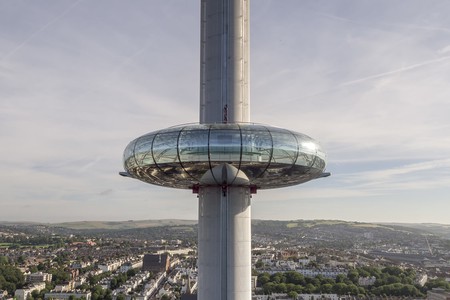 The much anticipated British Airways i360, a dizzying 162-metre tower and observation pod, opened to the public in August 2016. Located on the Brighton seafront, the ‘vertical pier’ is the world’s tallest moveable observation deck; visitors will enter a futuristic circular pod, 10 times that of the London Eye’s, and ascend 138 metres to enjoy 360 degree panoramic views of Brighton, the South Downs and the south coast.

Passengers aboard the brand new British Airways i360, the world’s most slender tower that took 11 years to develop and build, will take a flight in a moving pod up the tower and are able to walk freely around the space to fully take in views of up to 26 miles (depending on the Britishness of the weather that day). There’s a bar on board — although with capacity of up to 200 people and trips only taking 20 minutes in the day and 30 minutes in the evening, that’s a recipe for one hell of a crush — and an on-site brasserie serving dishes made from ingredients sourced within the 26-mile radius. The tower has been designed to operate in windy conditions, despite its slim build, with perforated aluminium cladding to diffuse the flow of wind and dampers inside to reduce vibrations. The pod is raised using a pulley system similar to those used on cable cars and cranes, and generates energy on descent. 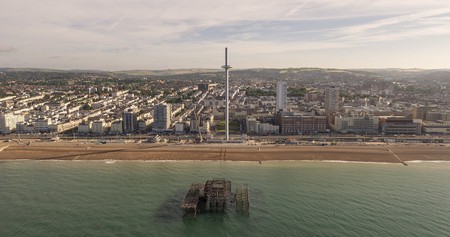 At only four metres in diameter, the tower looks barely possible, with a height-to-diameter ratio of 40 to one — a Guinness World Record by a clear mile. The i360 project was developed by Marks Barfield, the husband and wife powerhouse who also developed the London Eye, at a cost of £46 million; the majority of which came from a loan taken out by the council from the Public Works Loan Board, a government funding agency that facilitates major building projects across the country. 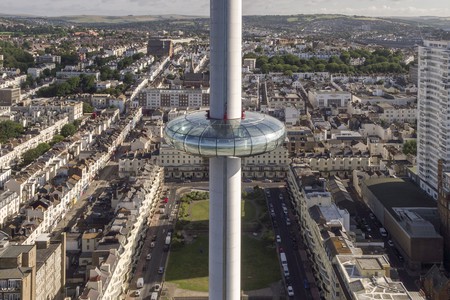 The tower is located by the Grade I-listed West Pier on the Brighton seafront, which has stood in ruins for 40 years, and has been commissioned as part of a major regeneration scheme for Regency Square and the seafront at large — something the campaigners and local authority say has suffered from ‘a lost decade’ due to underfunding and neglect. Towering above the Brighton skyline, it is hoped the dazzling, futuristic tower will help to raise funds to make the rebuilding of the historic pier possible, and provide a major boost to the city’s economy. It is expected to earn three times more than the necessary amount to cover its loan repayments, with the council’s share of ticket sales being channelled into the landscaping of the surrounding space. 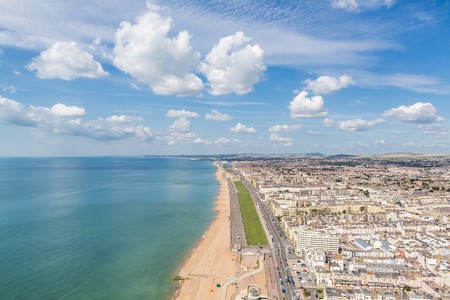 With BA flights set to advertise the i360 on incoming flights to Britain, it is hoped that the tower will give a major boost to tourism in Brighton — already the country’s most popular seaside destination — as well as signal that Brighton is open for business. But despite the necessity of regenerating Brighton’s seafront, not everybody is equally pleased; some locals are fearful that the i360 will open the floodgates for more high-rise development, with much of the quaint charm such as the Victorian arches being lost underneath, resulting in Brighton becoming like Las Vegas or being ‘Benidormed’. We don’t know about you, Blackpudlians, but we think they’re talking about you. 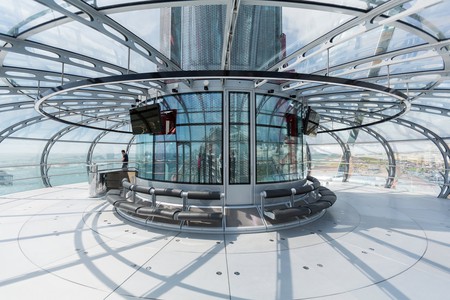 The interior of the pod | ©British Airways i360/BA

For now, the i360 remains an isolated slice of 21st century razzle dazzle on this charming, antiquated stretch of the British Coast. It goes without saying that such an outlandish structure has attracted a host of nicknames, from the Brighton Pole to iSore, and some more sexually explicit ones — but we’ll leave that to your imagination.