Why Are So Many People Playing With Slime on Instagram? 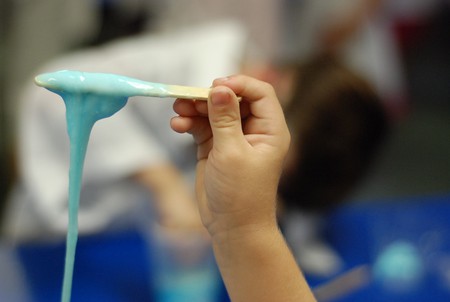 Apparently, to slime fanatics, the sounds created when playing with the slime can trigger ASMR (Auto-Sensory Meridian Response) which is a phenomenon of a full-body response to particular sounds, this can be whispering, scratching, or at this case, the sound of someone poking slime. People who have experienced ASMR have explained the tingles that they feel all over their body alongside a strong sense of relaxation. So it’s basically free therapy – but through Instagram. We bring you the top eight slime accounts you ought to check out to experience that ASMR treatment for yourself.

Considered one of the ultimate ‘slime queens’ of Instagram, Glitter.slimes was the first person to give up her job to become a full-time ‘slimer’. She now runs the biggest online slime store and hires six members of staff to help her make, package and post slimes to her thousands of customers around the world. Kudos to her and her success!

chewed up minty bubblegum 🍬 who's planning on purchasing this from my restock tonight? if not this, what do you want to try and grab?! 😋

The first ever slime account to reach one million followers on Instagram, slimequeeens has been reigned the queen bee of the slime world. Known for her rainbow-like feed and extremely satisfying slime poking, this page is without a doubt a one-stop-shop for any ASMR seeker.

here's another video for 1 mil (sorry the colors gross oops)

For those who are slime-virgins, there are different kind of slimes that create different sounds and textures; fluffy slime, crunchy slime, jiggly slime, bubblegum slime… the list can go on. Slime_og is the original inventor of ‘butter slime’ which is slime mixed in with clay, creating a thick, buttery texture – which still stands as the biggest slime trend of all time! Listen to it for yourself, and enjoy.

BUTTER OG 🔪✨ The original butter slime :''''') (Edit: I posted a recipe video but it got deleted 🙄 and I cannot repost because I deleted it on my phone too. My recipe has changed since then, and I will not be posting an updated recipe. I know no one will read this and keep asking, but ty to whoever actually reads this.)

Slime accounts have to get creative to prevent the slime trend from dying, so often they replicate real-life objects with slime to keep it fresh. Kickassslime has to be the most creative slime account out there; replicating anything from frozen blueberries to Starbucks drinks, it’s no wonder they have the most viewed slime videos of all time. Check out their take on the infamous strawberry lemonade ice drink.

Crunchslimes is the biggest ‘repost’ account for crispy, crunchy slime. You’re probably thinking, how can slime sound crunchy? Well, slimers mix styrofoam, glitter or any types of beads to make create slime that crunches when you stretch. It’s hard to not find this satisfying to the ears! The crunchier the slime, the better the ASMR.

vc: @snow._.belle via #/crunchslimesnotice Who is your favorite slime account?

Popularslime started a recent trend of mixing slime with Daiso clay, which is the recipe for butter slime. The trend within a trend became so popular that almost every slime account has a video of them mixing clay into their slime. There’s a sense of satisfaction seeing something messy turn into something so smooth.

The Instagram slime world is mostly dominated by female slimers, making Slimecaptain one of a kind. He’s the most popular male slime expert who has an awesomely clean feed, satisfying those who search for ASMR. Fun fact about Slimecaptain: He’s famous for saving up all the money he made from selling his slime to take his Mother on vacation. How cute is that?

Simpson's Pink Donut🍩🌈 This slime will be available during tommorow's @ 7pm! It's strawberry scented🤤🍓(Before y'all freak out, no I'm not giving anyone idea credz for this. I made this slime awhile back, you can scroll down my page and look)

Known for her amazing slime recipes and tutorials on her Youtube channel, Peachybbies is an expert in creating the cutest slimes and showing the world how to make them. With her aesthetically pleasing feed, you’ll fall into slime heaven from the first poke to the last.

OREOS N MILK🍪🍼 since I'm not restocking this week I tried to be a lil more creative with stuff! All these were almost too cute to smush😭😍 ♡ QOTD: cookies or cake??🍰🍪🍰🍪 ♡ click the link in my bio to get to my store! NEXT RESTOCK JUNE 3RD💕 ♡ Spamming ppl at random who repost n spread the slime loveeeeee ♡