Through A Poet’s Eyes: The Peak District's Untold Beauty 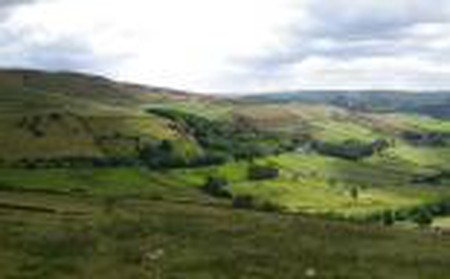 The Peak District is a large national park that stretches from the Midlands to the northern areas of England. The first official national park in the United Kingdom, it is renowned for its abundance of natural beauty. English Poet Matthew Stoppard explores the diverse terrain of the Peak District and reveals how the wild and undulating landscape has inspired his work.

Whenever I consider the relationship poetry has with the landscape, I am dumbfounded by the lack of significant poetic works associated with the Peak District. Tumbling into rural towns elsewhere around the country I can’t help compare them to my native Derbyshire and wonder why the area isn’t more famous; this is especially apparent given how much it has influenced me as a poet.
A fortnight before my 21st birthday I returned from a few days in Edale with a different outlook on verse. I had visited areas of the Dark Peak before, but this trip, which took in Kinder Scout and Jacob’s Ladder, inspired me to write my first commercially successful poem, ‘A Tactile County‘. During the journey back to Chesterfield train station I found my entire approach to writing had changed. It wasn’t so much my concern with the valley as a subject for poetry, but more that I felt possessed by the quickly shifting landscape and how that could be achieved on the page. Within the space of a few furlongs, the terrain can undulate dramatically; Edale in particular has the rambler ambling easily down a gully at one moment and struggling up a clough the next. I no longer explored the scope of emotion, but its steepness. Like the sheer drop from Kinder Scout to the river below, I would try to distill images that suddenly plummet into others. 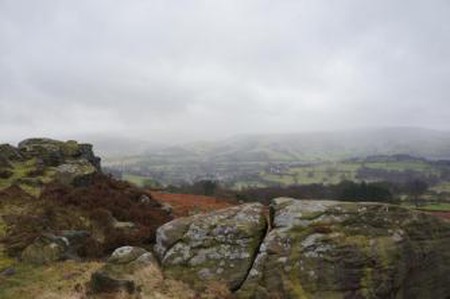 The region is renowned for its capricious weather, too. It was upon my first visit there that I faced the most violent rain slashing at my face and the loveliest sunshine drying my clothes as I crossed the blanket peat on Kinder Scout’s rugged plateau. It is important to mention that this summit is the highest point in the East Midlands, standing at more than 600m. It is not quite the size of the Lake District’s near 1,000m Scafell Pike, England’s pinnacle, but still a mountain of great stature. It is blustery with character as well; the escarpments have suffered the blights of millstone erosion, wildfires and overgrazing. It was here where I found myself at close quarters with a ram and was inspired to write a poem about the Derbyshire beast. He fixed his beady eyes on me and reared up ready to butt me in the midriff. Luckily, a sudden thunderclap frightened him down the hill and I was glad my trousers were soaked with rain and not fear.
And imagine, as a brash 20 year-old, discovering that Edale was the beginning of the Pennine Way. How easy it would be to bundle a tent and sleeping bag, and walk straight into Scotland, meeting God-knows-what along the 270 miles of moorland.
For a more cluttered experience, and I mean that affectionately, Castleton sits next door to the Edale valley, and amongst the most popular tourist towns in the Dark Peak. The River Noe runs through it and the formidable Mam Tor overlooks the goings-on from her heather-flecked seat. 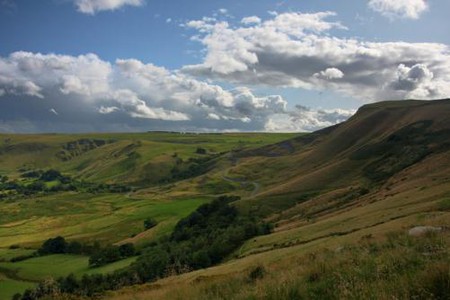 For a boy schooled in North-East Derbyshire, Castleton is a mandatory class trip and Mam Tor is most definitely a mandatory climb. ‘Mam’ is obviously a derivation of ‘mum’, conjuring images of Northern youths in shorts running up cobbled streets with loaves of Hovis, but the name of the mountain is Norse for ‘Mother Hill’. Learning this as a burgeoning poet was another revelation, for I was struck by the notion of humanising the land: observing an elemental family saga, in which the town has a maternal mountain, almost nursing everything around her. In contrast to this, Castleton is home to a curiously named cavern, ‘The Devil’s Arse’. Also known as ‘Peak Cavern’ or ‘Peak’s Hole’, it was surprising to find that this place had been the subject of a poem by the philosopher Thomas Hobbes. The young scholar produced De Mirabilibus Pecci: Concerning the Wonders of the Peak in Darby-shire in 1636 whilst tutoring William Cavendish at Hardwick Hall. Sadly, the poem is no more than a piece of doggerel that crudely reiterates the cavern’s name rather than expanding on it. To witness the cave is like facing a giant oyster-shell; the natural greys and beiges in the gloaming confirm that you are at the mercy of the minerals. Tours are available and the cavern is also an events venue, most notably showcasing the Sheffield songsmith Richard Hawley. Similarly you can take an underground boat ride in the Blue John Mine and Caverns.
Another influential sortie for me was a winter visit to Curbar Edge, further south, overlooking Chatsworth House and Baslow. It was Boxing Day, and I thought the walk would rid me of the festive paunch testing the button stitching on my new shirt. Equipped with impractical shoes and a sherry-filled hip flask, I ascended the hillside, slipping every so often on scree and stopping for a swig of Christmas cheer, until I reached the boulders and cenotaph at the top. Although Eyam will bring rhymes of ‘Ring-a-ring-a-Roses…’ to your ears, it is the village of Curbar that first suffered the plague. The tragic Cundy family graves can be found on the moorland, one more reminder of the uniqueness of this region. My walk (and my athleticism) on that day was limited to the village, but continue past Curbar and onto Froggatt Edge and there you’ll find another jagged platform on which to stand and swallow up the intimidating greenery and vertiginous beauty.
After collating all of these attributes I am left unsatisfied. There are fine poets who live in the Peak District, Ann Atkinson, Roy Fisher and River Wolton to name a few, and their output is influenced by the landscape. However, there is no direct correlation between poetry and the Peaks, like Hardy’s Wessex or Wordsworth’s Cumbria. How can it be that a region alive with violence and loveliness has not been celebrated in popular verse? But then I am settled in the knowledge that no sonnet or ballad could compliment such green uniqueness. It is its own poem.