The Top 10 Things to Do and See in Stokes Croft, Bristol 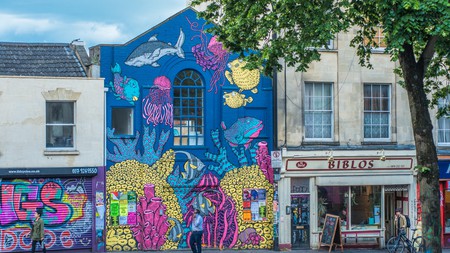 Stokes Croft has gained a reputation as Bristol’s cultural and artistic hub and taken on an identity of its own. Most businesses in Stokes Croft are independent and emphasise keeping things local and inclusive. Stokes Croft’s artistic atmosphere is characterised by its unique residents and, of course, its graffiti. Find out the top 10 things to do and see in this trendy neighbourhood in one of England’s, and the UK’s, most exciting cities. 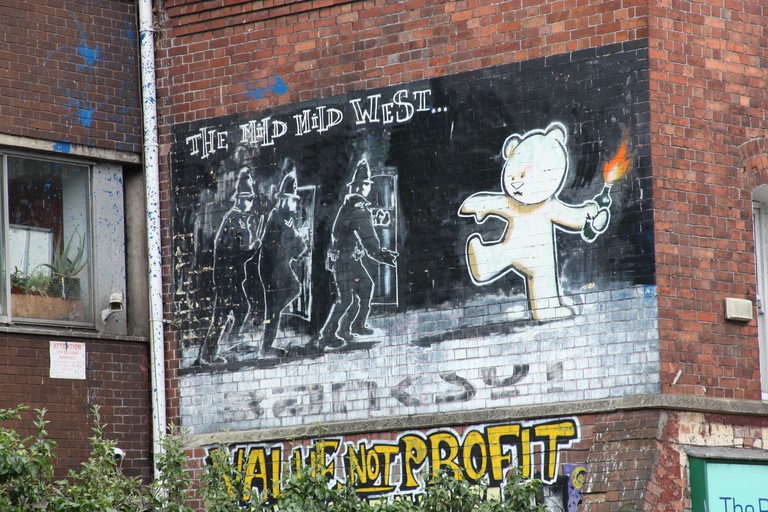 © Ben Molyneux / Alamy Stock Photo
Arguably one of the top 10 things to do in Bristol, a guided stroll in Stokes Croft is an experience in itself. The neighbourhood’s graffiti-clad walls and streets are an integral part of the community. You can find the work of famed graffiti artists such as Inkie and Banksy decorating shops and abandoned buildings. Rather than vandalism, graffiti is a key form of self-expression for the residents of Stokes Croft. The People’s Republic of Stokes Croft, a community group, dedicates itself to protecting and promoting graffiti as a way of improving the streetscape of the neighbourhood that was previously dilapidated because of neglect. Some famous works include Banksy’s Well Hung Lover and the Boycott Tesco graffiti project.
Open In Google Maps
Stokes Croft, Bristol, England, United Kingdom
Give us feedback

Stokes Croft is best known for being a place to express art in all its forms, cinema being one of them. There are few better ways to escape reality than by delving into a good film. From cult classics to foreign films, Stokes Croft offers several spaces to watch independent art films. The Arts House Cinema is a space for just this, showcasing cinema screenings in their multi-purpose basement, along with live music, art exhibitions and more. In a similar vein, The Cube Microplex is a non-profit organisation that is organised as “a social art experiment existing in the form of a cinema and event venue”, and remains as one of the best cinemas in England. Unwind and get creative by watching an inspiring film at one of many venues in Stokes Croft.

Museum
Facebook
Email
Twitter
Pinterest
Copy link
Share
Map View
The Stokes Croft Museum is a unique one-room collection and “record of the recent past” for the eclectic neighbourhood. Rather than a historical account of the area, this gallery is dedicated to paying tribute to the cultural quarter by displaying an assortment of items and compositions that showcase the essence of Stokes Croft. Doubling as headquarters of the People’s Republic of Stokes Croft, this museum aims to encourage street art, support the local economy and promote an open and inclusive environment. To get to know the identity of Stokes Croft, head to this museum for an unusual type of cultural exhibition.
Open In Google Maps
Stokes Croft, Bristol, England, United Kingdom
Give us feedback 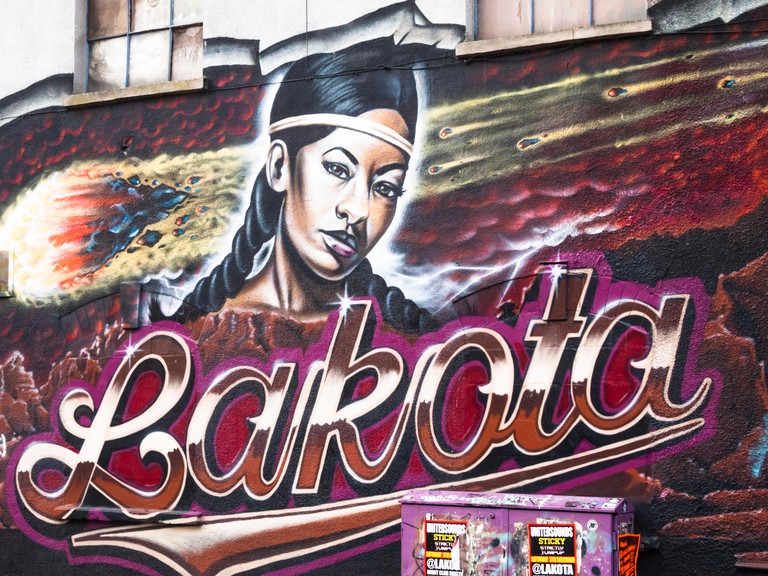 © Mr Standfast / Alamy Stock Photo
It is commonly acknowledged that nightlife in Bristol is second to none. It is no surprise that some of Bristol’s best clubs are right in the middle of Stokes Croft, the most creative and cultural hub in the city. Lakota Club burst onto the scene as one of the UK’s most famous clubs in the 1990s when raving became immensely popular. This massive three-storey venue often features internationally renowned house, techno and psychedelic trance DJs. Blue Mountain is another long-established house of rave in Stokes Croft, dimly lit and grungy enough to create an atmosphere where underground music and ravers thrive. Any fan of underground music must spend a night out at a club in Stokes Croft.
Open In Google Maps
6 Upper York Street, Saint Paul's Bristol, England, BS2 8QN, United Kingdom
+441179232225
Visit Website
Give us feedback

Market at the Moon

Bar, Market, Contemporary, $$$
Facebook
Email
Twitter
Pinterest
Copy link
Share
Map View
Market at the Moon is your best bet for finding original and handcrafted goods. This market is perfectly in line with the ethos of Stokes Croft, attracting independent traders, crafters and artists to buy and sell unique clothing, jewellery, furniture and more. Usually on the first Saturday of each month, this pop-up market takes over one of Stokes Croft’s best bar venues during the daytime on the corner of Moon Street and is entirely volunteer-led. Spend your Saturdays perusing upcycled accessories while snacking on vegan or vegetarian treats available at the market, an incredible gathering of Bristol’s best independent businesses.
Open In Google Maps
1 North Street, Saint Paul's Bristol, England, BS1 3PR, United Kingdom
+441179245007
Visit Website
Give us feedback

Live music at the Crofter's Rights

Bar, Restaurant, Pub, Asian, Pub Grub, $$$
Facebook
Email
Twitter
Pinterest
Copy link
Share
Map View
If a heavy night of raving isn’t your ideal night out, the bar scene in Stokes Croft has many alternatives to offer. The Crofter’s Rights, one of the best bars in Stokes Croft, is famed for its selection of craft beers from around the world, displayed on a large chalkboard upon entry. This bar regularly hosts live music events and showcases all kinds of music from local talent, in keeping with the Stokes Croft community effort to think local. Unwind with a unique craft beer at this hip venue.
Open In Google Maps
117-119 Stokes Croft, Cotham Bristol, England, BS1 3RW, United Kingdom
+441172310079
Visit Website
Give us feedback

Eating out at independent restaurants 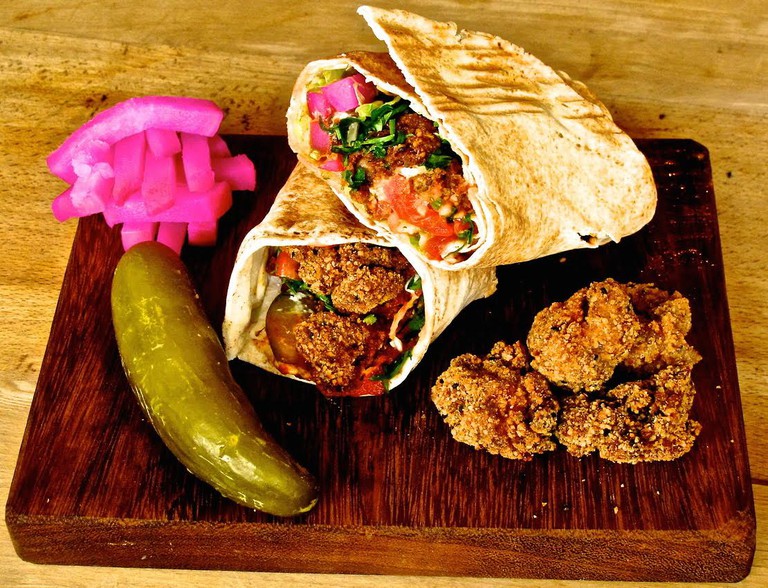 Biblos Jerk Wrap | © Courtesy of Biblos | © Courtesy of Biblos
The Stokes Croft neighbourhood has an incredible variety when it comes to places to eat. Most restaurants and food places in this neighbourhood are independent and emphasise sourcing local, fresh ingredients, as well as creating open and welcoming environments for all types of people. Often, venues double as art spaces for exhibitions, cinema screenings and other events. Some of the best vegan and vegetarian goodies are to be found at the restaurants in Stokes Croft. Plus, the cultural diversity of the community adds to the variety. Sample a Lebanese-Jamaican wrap at Biblos or a transatlantic selection of pancakes from At The Well.
Open In Google Maps
62a Stokes Croft, Saint Paul's Bristol, England, BS1 3QU, United Kingdom
+441179232737
Visit Website
Give us feedback

Store
Facebook
Email
Twitter
Pinterest
Copy link
Share
Map View
Going shopping in Stokes Croft guarantees a good find. The creativity of residents of Stokes Croft shines through in a project led by the People’s Republic of Stokes Croft to create art furniture, using materials found on the street and old furniture headed for a landfill. This assortment of quirky cupboards, coffee tables, lamps and more ranges greatly in price, from pocket change to thousands of pounds. Whether you need a new bedside table or just fancy window shopping, this is a unique Stokes Croft activity to experience.
Open In Google Maps
35 Jamaica Street, Bristol, England, BS2 8JP, United Kingdom
+441179444540
Visit Website
Give us feedback

Store
Facebook
Email
Twitter
Pinterest
Copy link
Share
Map View
One of Britain’s oldest musical stores, Mickleburgh’s Musical Instruments has been on the corner of Stokes Croft since 1803. Originally a family business selling pianos, this independent music store has grown to an incredible size and offers a variety of services along with selling just about every instrument you can think of. Even if you aren’t gifted with musical talent yourself, this Stokes Croft institution is a worthwhile visit to browse through its musical maze in wonder.
Open In Google Maps
1-9 Stokes Croft, Bristol, England, BS1 3PL, United Kingdom
+441179241151
Visit Website
Give us feedback 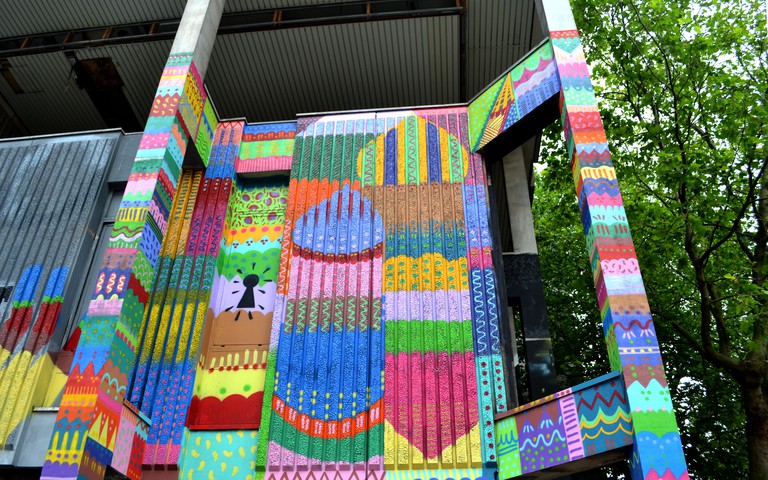 © Ferne Arfin / Alamy Stock Photo
The See No Evil Gallery is a must-visit when in the Stokes Croft neighbourhood. With a collection of public artwork by multiple graffiti artists located around Nelson Street, this open-air gallery is Bristol’s answer to Berlin’s East Side Gallery. Its creation in 2011 was Europe‘s largest street art festival at the time and turned into a massive block party in true Stokes Croft fashion. In 2012, the See No Evil gallery was painted anew when the event was repeated. Before 2011, Nelson Street was considered to be one of the most unattractive and rundown streets in Bristol, but it is now a cherished part of the community and captures the zeitgeist of Stokes Croft.
Open In Google Maps
Nelson Street, Bristol, England, United Kingdom
Give us feedback
Give us feedback