The Prettiest Towns and Villages in Devon, UK 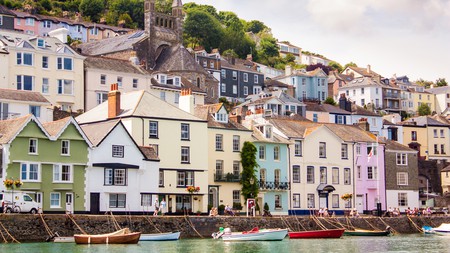 View of the small town of Dartmouth and the harbour. | © Eduardo Fonseca Arraes / Getty Images

Devon’s fascinating history, natural beauty, size and varied landscape have helped create a plethora of places that are striking in their character and appearance. Read our guide to the prettiest must-see villages and towns.

A visit to the village of Clovelly in north Devon is like stepping back in time, with its steep and narrow cobbled high street flanked by traditional 16th century whitewashed houses adorned with colourful blooms. As you wander down the high street towards Bideford Bay, the views are stunning and it’s little wonder many artists, including the great J.M.W. Turner, sought inspiration here. Clovelly is unusual in that it’s been entirely privately owned by just three families for nearly 800 years. Conservation has remained a high priority and traffic is banned on the high street, so visitors should park at the top and walk down. At one time, donkeys were deployed to transport deliveries but they’ve since been retired and sledges are now used instead. 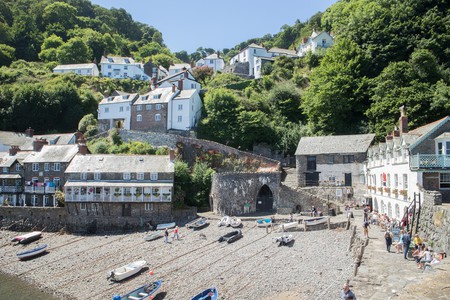 Considered by many to be one of south Devon’s most attractive villages, small, unspoilt Dittisham in South Hams sits on the banks of the River Dart just two miles upstream from Dartmouth. Known locally as Ditsum, not only is the village itself a delightful sight but the river views in the changing light are beautiful and atmospheric. The surrounding countryside is also glorious and there are numerous walks you can do. Dittisham is served by a passenger ferry that you can take the short distance down to Dartmouth, and also across to Greenway Quay if you want to visit Agathie Christie’s former holiday home Greenway House, which is highly recommended. 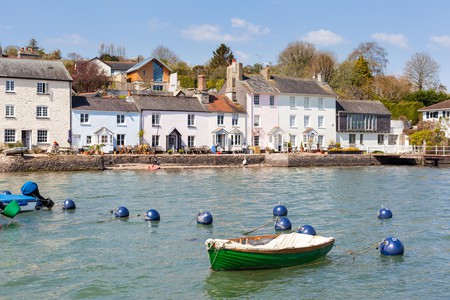 Located a stone’s throw from Torquay in south Devon’s English Riviera – known for its 22 miles of gorgeous coastline and pretty villages – Cockington still manages to stand out from the crowd. You don’t get more quintessentially English and idyllic than this, with the narrow lanes, thatched houses, water mill, forge and a cricket pitch that was once a medieval deer park. The village was first officially documented in the 10th century, but is believed to have been founded 2,500 years ago during the Iron Age, due to the existence of two hill forts on either side of Cockington Valley. 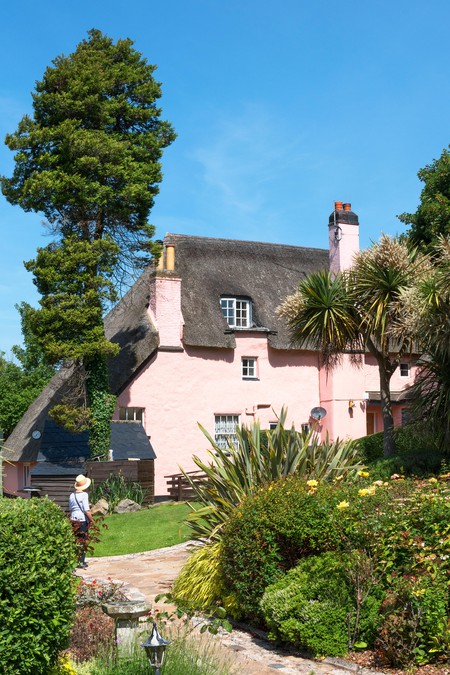 Perfectly positioned for Dartmoor, Ashburton on its southerly side is a charming, thriving market town with a wonderfully scenic backdrop. It has a strong, environmentally focused, nature-loving community with lots of galleries, cafés and restaurants and shops selling books, antiques and arty knick-knacks. While in the area, treat yourself to a ride on the steam railway from nearby Buckfastleigh, it’s a great way to see the countryside. 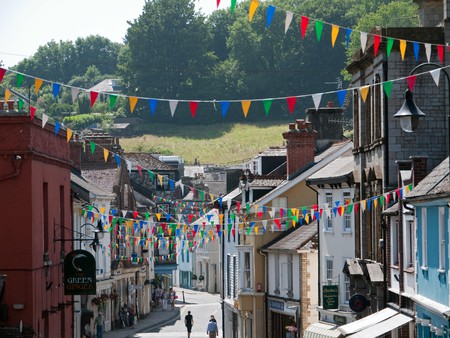 This sweet little village, nestled on the northeast edge of Dartmoor in gorgeous countryside, is known for its pretty thatch, cob and moorstone cottages. It sits at the top of the Teign Valley on a wooded hill, which slopes down to the River Teign. Dunsford itself is fairly quiet; there’s a school, a pub, a swimming pool and sports field and a few shops for amenities. With the whole of Dartmoor on its doorstep, however, being here is about soaking up the atmosphere of the town and enjoying nature. Nearby Dunsford Nature Reserve is worth exploring especially in the spring, when you can walk among bright yellow wild daffodils. 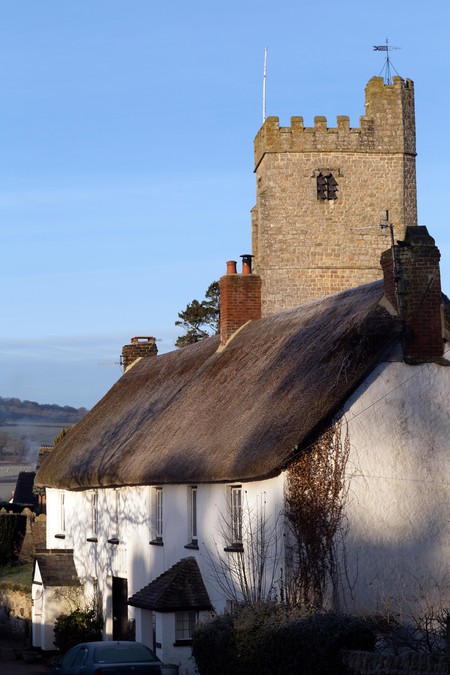 Undoubtedly one of Devon’s finest towns, Dartmouth has it all. It’s picturesque, interesting and there’s so much to do here within the town and surrounding areas. It’s set on the western bank of the River Dart estuary within the South Devon Area of Outstanding Beauty, with access to the South West Coast path and Dartmoor National Park a few miles away. The busy harbour is a great place to while away some time watching the boats from one of the many cafés and restaurants. Dartmouth Castle and Dartmouth Museum both offer a glimpse into the town’s more distant fascinating past, while the house at Coleton Fishacre transports you back to the stylish 1920s. 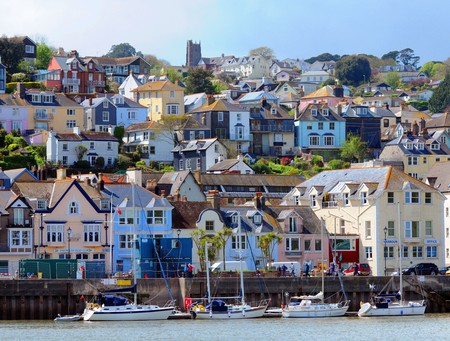 Blessed by its fantastic location in the South Devon Area of Outstanding Natural Beauty and surrounded by woodlands and rivers, Totnes is a thriving hub with character, colour and a long history. It dates back to AD 907 and by the 12th century had established itself as an important market town. Such a rich history is evident. Architecturally, it’s said to have more listed buildings per head than any other town. These days it’s a draw for those who enjoy the arts, music, natural health and more alternative views on life so it has quite a progressive bohemian vibe, which is a charming contrast to such an old town. It’s very foodie and markets are still a big feature. There are outdoor markets every Friday and Saturday and between May and September there’s an Elizabethan market on Tuesday. 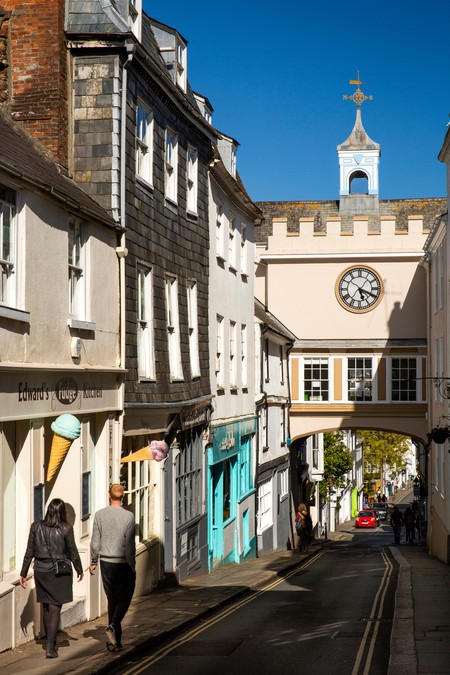 If you want to explore north Devon’s beautiful coastline and fantastic sweeping beaches, award-winning Woolacombe is a charming seaside resort that attracts surfers and family holidaymakers in droves, alongside nearby Croyde. It’s in the North Devon Coast Area of Outstanding Natural Beauty and the three-mile beach lies between Baggy Point and Morte Point flanked by rolling sand dunes. 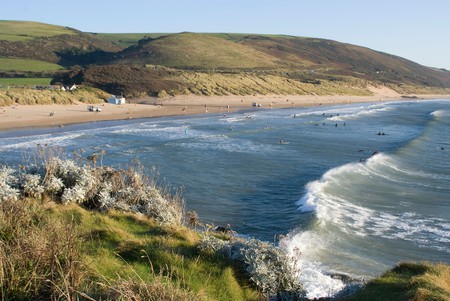 It’s hard to leave Brixham as it has a captivating buzz. Located in the district of Torbay across the bay from Torquay in south Devon, Brixham is one of the UK’s busiest fishing ports and the largest working harbour. That adds to the character and energy here, creating a town that has a vibrant arts, crafts and food scene. You’ll see maritime and nautical imagery in lots of places, such as in the art and gifts on sale, and of course delicious fresh fish and seafood is widely available. Historically, Wiliam of Orange landed first in Brixham during the Glorious Revolution. There’s also a full-size replica of Sir Francis Drake’s galleon the Golden Hinde, which is fun to visit 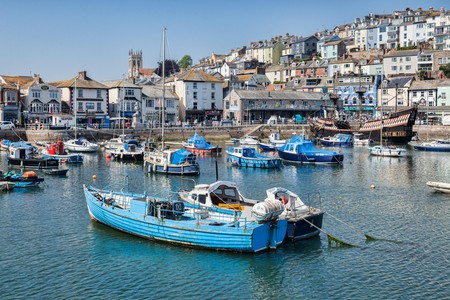 A popular resort since Victorian times, Ilfracombe in north Devon is a visually striking place with whitewashed houses that seem to be tumbling down the hillsides towards the harbour. The town sits on the coast between Exmoor National Park near various sandy surfing beaches and has an interesting history dating back to the Iron Age. There’s a rolling grassy hilltop called Hillsborough Hill that was a fortified Iron Age settlement and is now a nature reserve, known locally as the ‘sleeping elephant’. British artist Damien Hirst resides in Ilfracombe and is invested in its development. His sculpture of a flayed pregnant woman called Verity prompts mixed reactions, plus he also has a restaurant called No. 11 the Quay. 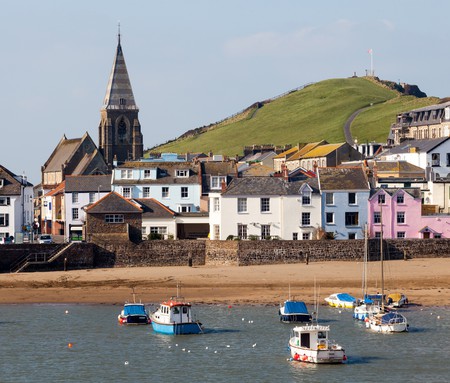