© Phillip Maguire / Shutterstock
The North East of England’s beauty is renowned, the region synonymous with grand Georgian architecture, breathtaking industrial bridges, imposing castles and a tempestuous coastline. Spend a little longer in these parts and visitors can experience a wealth of outdoor art and sculpture that is as much influenced by the storied past as it is inspired by a bright future. We discover 10 of best sculpture parks and examples of outdoor art in North East England.

Supporting and participating in the cultural regeneration of Tyneside, Advocate is one of the latest sculptures to appear in Newcastle upon Tyne, standing pride of place in Central Square. The dynamic work, by American artist Bruce Beasley, shows a tower on bronze blocks on the verge of collapse. As if to reflect the increasing local engagement with the arts, Beasley’s sculpture entices viewers to walk around it, offering a tangible sense of tension and impending movement. 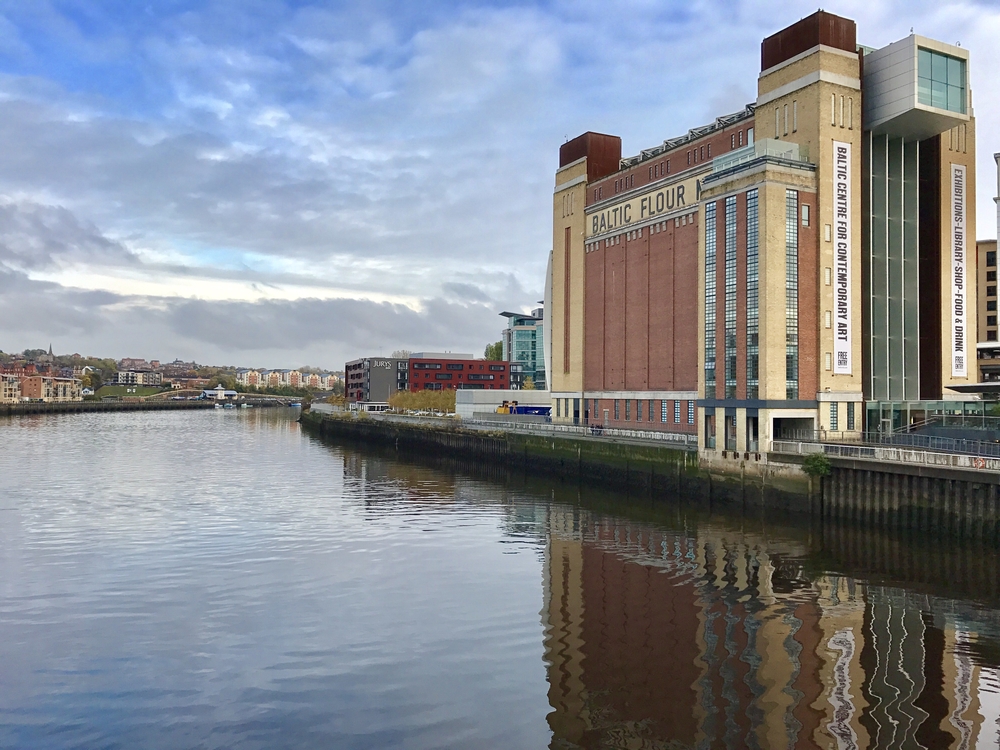 The Angel of the North is the visible symbol of the amalgamation of Newcastle and Gateshead. The 66ft steel sculpture was a bold but immensely controversial public artwork that instantly dominated the landscape. Its skeletal frame and rust-red exterior initially gave off the impression that the Angel was unfinished or abandoned. For a long time, locals were uncertain about the sculpture, but artist Antony Gormley remained confident that he had designed something for the people. He included a subtle flourish that he hoped would subconsciously lead residents to embrace his Angel – the wings are angled forward 3.5 degrees giving the sense that it’s arms are reaching out to welcome visitors. 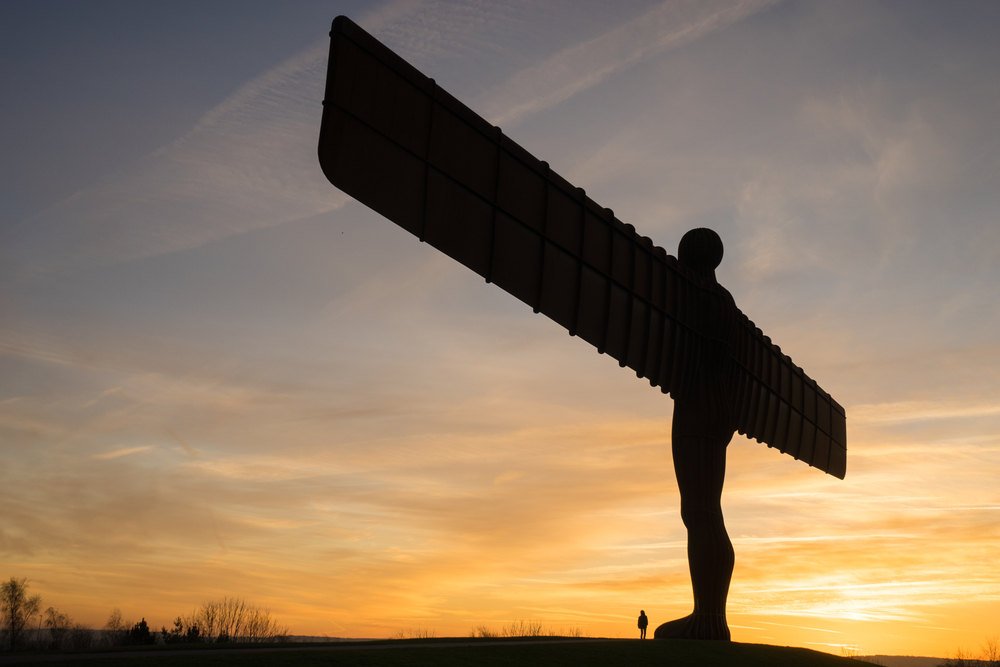 The Angel of the North, Gateshead. A steel sculpture by Antony Gormley © DavidGraham86 / Shutterstock

Park
Prehistoric rock art / Ancient prehistoric cup and ring rock art is found on many stones at Lordenshaws in the Simonside Hills part of Northumberland National Park | © Dave Head / Shutterstock
Whilst Hadrian’s Wall is famous the world over, Northumberland’s Iron Age Rock Art is a lesser known but equally magnificent example of human’s making an impact on the landscape. Throughout the county, there is a scattering of upright boulders decorated with organic shapes and patterns. These mysterious and deliberate markings seem to be expressing a wish to reflect upon and to glorify the natural world around them.
More Info
Open In Google Maps
Wooler, England, NE71 6TS, United Kingdom
View menu
Visit website
Visit Facebook page
Send an Email
Give us feedback

Forest, Park
© Nicholas Mutton / Creative Commons
Kielder Forest and Water Park is such a hive of activity that it seems only natural that when artists were commissioned to create sculptures to live alongside the lake, they would be playful and interactive. The Janus Chairs, located towards the bottom of Plashetts Burn, are three movable seats which can rotate outwards to provide unobscured views over Kielder Water, or turned inward to form a shelter. Silvas Capitalis, by American artist SIMPARCH, is a strange and unforgettable sight among the trees. The bald head wears a shocked expression as if he is observing the dramatic changes that have occurred over the past century. That same uneasy expression would suit those wandering around Kisa Kawakami’s Mirage Deck. Raised a few feet off the forest floor, this deck was originally built to help visitors navigate to a previous installation, but now offers an eerie sense of nature reclaiming its space from human development.
More Info
Open In Google Maps
United Kingdom
View menu
Visit website
Visit Facebook page
Send an Email
Give us feedback

Sean Henry’s surreal bronze sculptures depict three alter egos of an Everyman character, one strolling purposefully into the city, another resolutely facing the wind and the third absurdly suspended on his elbow. Positioned across the road from the region’s busiest train stations, Henry’s sculptures have inspired shocked double-takes and surprised smiles from local and tourists alike. 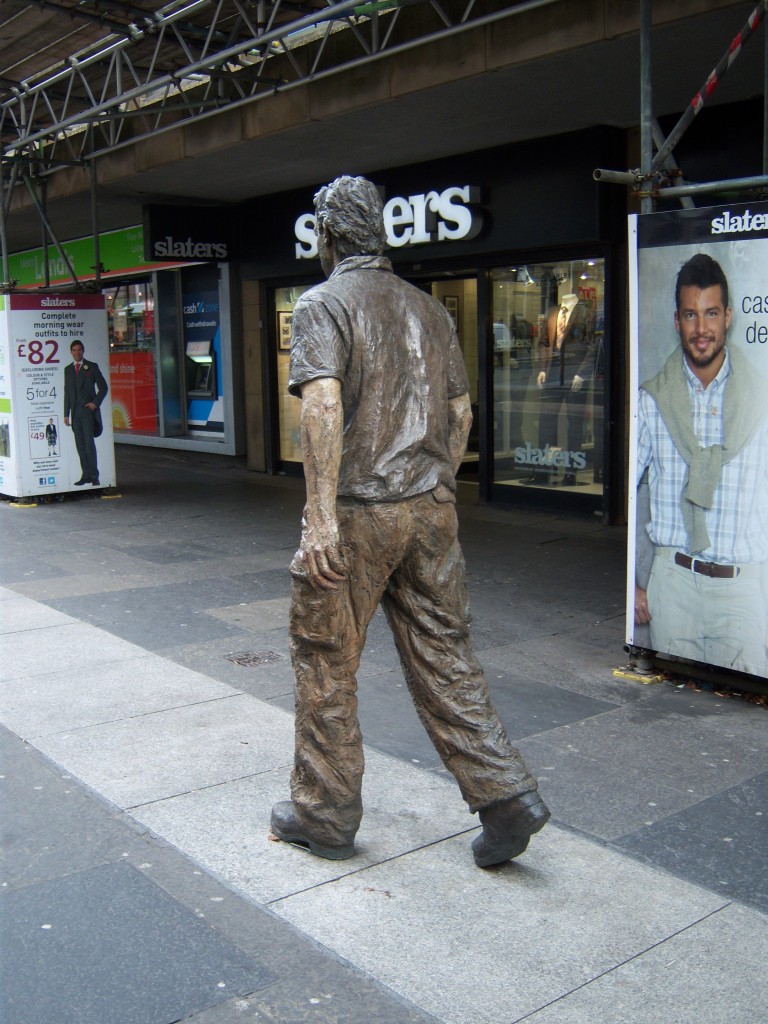 Bridge
On the north side of the Tyne, the sculptures dotted along the water’s edge are connected by their maritime themes. Starting in front of the Millennium Bridge, Andre Wallace’s bronze Siren sits fiercely atop her steel platform, whilst moving down towards the distant sea, Andrew Burton’s bronze Rudder rises sharply out of the ground. A short stroll beyond these icons brings visitors in front of the Blacksmith’s Needle, a conical tower with six sections, which catches your eye from a distance with its selection of maritime motifs.
More Info
Open In Google Maps
Gateshead, United Kingdom
View menu
Visit website
Visit Facebook page
Send an Email
Give us feedback

Thought to be the largest landscape replica of the female body in the world, Northumberlandia is a languid and sultry sculpture which recalls ancient chalk drawings. Curving footpaths wrap around her elegant form and mark out the elemental shapes of a body. The work itself is created by products of a nearby open cast mine and layered with soil and grass. Whilst it may seem unfortunate that the perfect view of Northumberlandia would be from a helicopter, visitors can become truly immersed in the sculpture as they explore and ramble up and down the paths testing out new and abstract perspectives of this behemothic creation.

Cathedral
Whilst strictly speaking not ‘outdoors’, the Pieta at Durham Cathedral deserves to be on any list of North Eastern sculpture. Created by locally-born artist Fenwick Lawson, this sculpture shows a mournful Mary grieving for her dying son lying before her. The awesome majesty of Durham’s Norman Cathedral is both humbling and breathtaking, creating an idea of the glorious power of the space within. Lawson’s Pieta, located within the tranquil apse, manages to halt visitors in their tracks. An exhausted and physically broken Jesus reaches up to his mother, the giver of life, but the distance between the two cannot be reduced. In a reversal of God giving life to Adam in the Sistine Chapel, Lawson captures the suffering and death before the resurrection.
Looks like it's closed Hours or services may be impacted due to Covid-19
More Info
Open In Google Maps
Durham, England, DH1 3EH, United Kingdom
+441913864266
View menu
Visit website
Visit Facebook page
Send an Email
Give us feedback

Bridge, Park
With such a culturally ingrained and distinctive industrial past, there is a common misconception that the people of the region maintain a stubbornly utilitarian outlook. The closure of factories and warehouse along the banks of the River Tyne has allowed for the flourishing of a mile of galleries, music venues and sculpture parks. On the south side, underneath the distinctly functional Redheugh Bridge is Riverside Sculpture Park. The park itself was marked out and landscaped in the 1960s, and over the past twenty years has become home to popular sculptures such as Colin Rose’s Rolling Moon and Sally Matthew’s frolicking Goats.
More Info
Open In Google Maps
Saint James' Boulevard, Gateshead, NE8 2NX, United Kingdom
View menu
Visit website
Visit Facebook page
Send an Email
Give us feedback

Bridge, University
© Malc McDonald / Creative Commons
At the mouth of the River Wear, the last remnants of old industry sit opposite the sloped architecture of the National Glass Centre and the university. Starting at the iconic Wearmouth Bridge, a sculpture trail commemorates the heavy manufacturing which made the city famous, showcasing a series of accessible pieces which invite both interaction and contemplation. Shadows in Another Light by Craig Knowles, Colin Wilbourn and Karl Fischer is located on the site of a former shipyard crane and its steel tree casts a permanent, painted shadow upon the University’s riverside buildings. Whilst many of the sculptures – especially Craig Knowles’ Taking Flight – suggest a region hoping to shake off its industrial past and promote a more learned future reputation, Colin Wilbourn’s Pathway’s of Knowledge reminds visitors and residents alike, that this enclave of the North East has historically been linked to education.
More Info
Open In Google Maps
A1018, Sunderland, England, United Kingdom
View menu
Visit website
Visit Facebook page
Send an Email
Give us feedback
Give us feedback