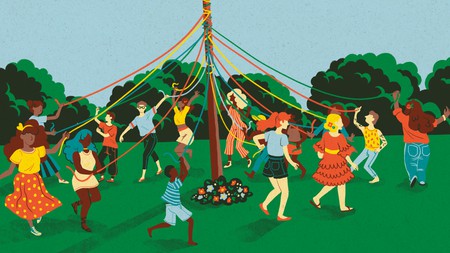 May Day celebrations take place all over England on 1 May with bonfires, maypole dancing and parades. But the holiday’s early associations with pagan fertility rituals nearly saw the end of the festival.

On 1 May, children wear flower crowns and dance with ribbons around the ceremonial maypole to celebrate May Day. But in the 17th century, some high-profile Brits feared the holiday’s pagan origins and lovemaking rituals, and subsequently threatened to end the celebration for good.

What is May Day?

In England, May Day hails from the Gaelic celebration of Beltane, which marked the first day of summer. It is considered one of the most important holidays in Gaelic tradition – the other being Samhain, which marks the beginning of winter. With longer days, warmer weather and a bounty of fresh spring flowers and fruits, May Day also marked a celebration of fertility, which often involved ritual sex.

Along with amorous romps, revellers would gather the dew on Beltane morning to wash their faces (it was thought to make the wearer more attractive for the year). The festival also involved bonfires, eating oatcakes, dancing around the maypole and crowning the May Queen– a young woman decorated in honour of the goddess Flora. 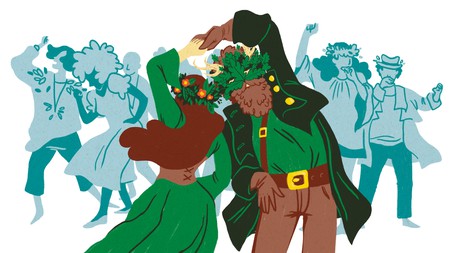 Why is May Day significant in English History?

May Day celebrations were well established in England by the 14th century, but the 17th century saw trouble for the ancient ritual. Following the English Civil War, which resulted the overthrow of King Charles I by Oliver Cromwell and his Puritan supporters, many long-held celebrations including Christmas were regarded as immoral. May Day fell under this scrutiny and village maypoles were banned until the monarchy was reinstated and Charles II came to power in 1660.

The rebirth of the holiday saw the addition of Jack in the Green, or the Green Man to celebrations. The figure, bedecked in green and foliage is intended to be the male embodiment of nature’s abundance and in some cases was the male escort for the May Queen. The Green Man may have existed in earlier celebrations, but during the 18th century he became popular as he lead a procession of merry morris dancers through the streets in May Day celebrations.

The late Victorian era saw the tradition fall in popularity, which some attribute to prudish attitudes towards the bawdy nature of celebrations involving flowing drinks and off-colour jokes. But because May Day celebrations usually took place in villages, it’s more likely this decline was a result of more people moving to city centres to find work. 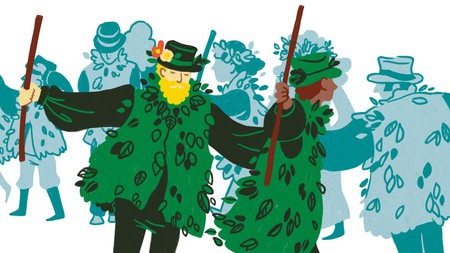 How is May Day celebrated?

Almost coincidentally with the decline of village celebrations in England, May Day began to take on a new global significance as International Workers’ Day to commemorate the Haymarket affair in Chicago. On 4 May 1886, a bombing disrupted a labour demonstration held at Haymarket Square in support of the eight-hour work day and other labour rights. Today, while May Day means maypoles and revelry for the UK, in much of the world the day entails protests and union rallies.

But in England the holiday still clings to its flower-crown origins. People gather in Hastings for the Jack in the Green May Day Festival for three days of dancing, drink and merriment over the bank holiday. In Cornwall, nearly 30,000 cram into the town of Padstow for the ‘Obby ‘Oss Festival to watch maypole dancers and the parade processions led by hobby horses. In London, celebrations take place around the capital at city farms and museums, including East London’s Geffrye Museum and Stepney City Farm.