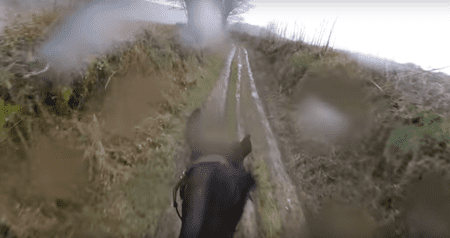 ‘Whoah, whoah, whoah… Sham, walk… woah… Shamrock!… No, Sham for f*ck’s sake!’ screams Nick Bull, the rider who just became a hit sensation on YouTube after he fell off an ex-racehorse.

‘Woah, Shamrock!’ The viral video has amassed over two-million views since it was uploaded on video-networking site YouTube on March 19.

‘Shamrock is a retired racehorse,’ wrote rider Nick Bull in the YouTube description. ‘On this day, he forgot he was retired, or that I’m not that experienced a rider and decided to take me for the ride of my life.’

‘Please excuse the bad language and girly screams at the end…,’ Bull ended.

Watch the hilarious video below.

Want more funny news? This London restaurant has banned avocados from its menu!