Lakes in and Around Cambridge, UK 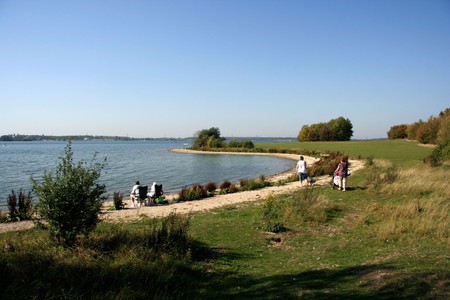 While the River Cam may be the most famous body of water in the Cambridge area, it isn’t the only one. Both within the city limits and just outside, there are plenty of lakes that make for a lovely walking route, or perhaps even a full day out.

Whether you’re a keen angler, want to try your hand at sailing or are in search of a nice, calm waterfront to watch the sunset, here are a few great lakes to visit in the Cambridge area.

Sitting in a site thought to have been populated as early as the Iron Age, Cherry Hinton Brook is a small, handsome body of water just within the limits of Cambridge. Even though it’s small, it has gained a reputation as a great hotspot for fish and other wildlife. Cherry Hinton Brook is just a 10-minute drive east of the city centre.

Established as an angling habitat in 2015, Cawcutts is one of the hidden gems of Cambridgeshire. Even if you don’t fish, the sizeable population of carp and crayfish make for a lively, entertaining lake to sit by and while the hours away. Cawcutts Lake is a 15-minute drive north of Cambridge, just outside Impington.

Barnwell Lake was previously another well-liked spot for anglers, but it closed to them in 2020 for maintenance work. You can still visit it; the outer banks of the small lake provide plenty of beautiful scenery, including several patches of lilies. Barnwell Lake is next to Coldham’s Common, 30 minutes on foot from the city centre.

Many Cambridgeshire residents will likely recall a fun school trip to Grafham. At 627ha (1,550 acres), it’s vast – among the largest reservoirs in England. Visitors can enjoy sailing, birdwatching, fly fishing and even a cycle route that runs around the entire perimeter. Grafham is a 40-minute drive west of Cambridge.

Open In Google Maps
England, United Kingdom
Give us feedback

Another smaller entry, less than 1ha (two acres), Bolton’s Pit Lake is so named because it was where George Bolton quarried his bricks – the Boltons were an influential family in Cambridge during the mid-19th century. Now, the pit supports a colourful, interesting range of flora and birdlife. Bolton’s Pit Lake is on Grantchester Road, 30 minutes on foot from the city centre.

Milton Country Park is among the largest and best parks in the Cambridge area, and it contains two lakes: Todd’s Pit and Dickerson’s Pit. Both support a variety of wildlife and are open to such activities as canoeing, paddleboarding, fishing and open-water swimming. Milton Country Park is 15 minutes north of the city centre by car.