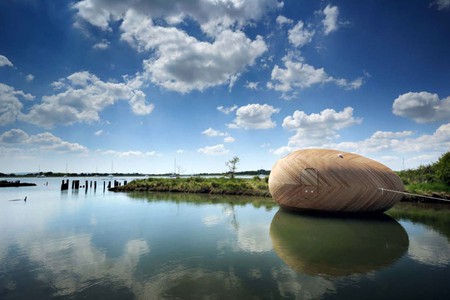 After an extensive tour of the UK’s highways, byways and waterways, Stephen Turner’s Exbury Egg (2012) will be the star attraction of Jerwood Gallery Hastings’s autumn programme when it arrives in The Courtyard space this September.

The brain child of artist Stephen Turner, the Exbury Egg was hand-crafted by master boat-builder Paul Baker in collaboration with architect Wendy Perring. At 6m (19.7ft) long and 3.5m (11.5ft) wide, the superbly created wooden ovoid vessel began its journey in the River Exbury in 2012. 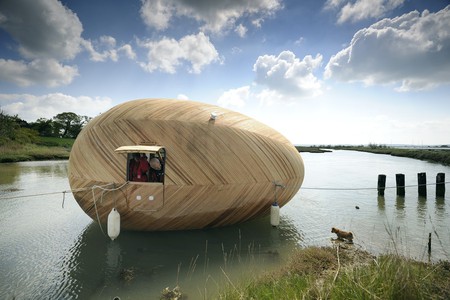 Designed by the multi-disciplinary artist to have minimal environmental impact, the cedar-wood creation houses an open-plan living space with kitchen, desk area and a simple bathroom.

‘In an urban 21st-century world where we are increasingly disconnected from nature, I wanted to use this ancient archetypal symbol to nurture re-enchantment with the natural world, as a step toward a sustainable future,’ said the artist about his compact immersive artwork. 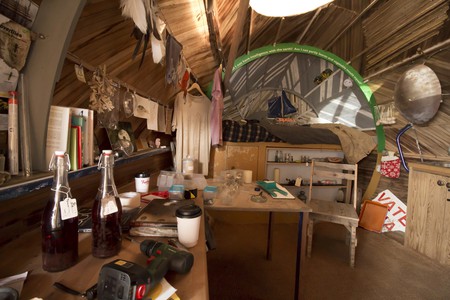 Since it departed the New Forest, the Exbury Egg has travelled to Leeds, Liverpool, Milton Keynes, Portsmouth and London’s East End. During the course of its expedition, the egg’s exterior has become bleached by the sun, shows signs of weathering from wind and rain, and acquired some barnacles along the way. 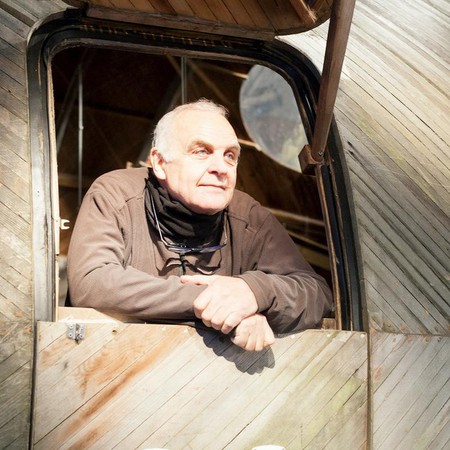 For a month, you’ll be able to explore the mastery of this wonderful creation. Everything Comes From The Egg will not only showcase the extraordinary watercraft, interior and all, but also a collection of ephemera from Turner’s life including tools and a variety of works in progress. 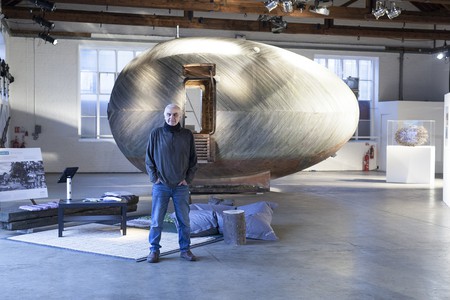 ‘We are so pleased to be working with Stephen Turner for the final stop of his UK tour,’ said Victoria Howarth, curator at Jerwood Gallery. ‘It will be particularly interesting to see the artworks he will create as a result of his residency in Hastings.’

Stephen Turner: Everything Comes From The Egg will be on view in The Courtyard at Jerwood Gallery Hastings from September 16 to October 15, 2017.

Want to see more art news? Try The Most Famous Bed in Art to Go on Show in Margate