‘One to be ready, two to be steady, three for the cheese, four to be off!’ Every year, in the Cotswolds area in the south of England, thousands gather at a local hill for an utterly unique event that sees competitors race down to the bottom chasing after a four-kilo wheel of cheese. On the count ‘three’ the cheese is rolled, and on ‘four’ the race begins.

Cooper’s Hill in the village of Brockworth has been home to this unusual race for hundreds of years. The hill is perilously steep, ensuring racers tumble and bounce their way down in an utterly futile attempt to catch a cheese that can reach speeds of up to 70mph. If running down a hill that features a terrifying 45% gradient wasn’t hard enough, there is even a local rugby team on the course waiting to tackle anyone who loses their balance, and yet the event still attracts competitors from all over the world. In 2004, for example, New Zealander and former All Blacks-player Marc Ellis won. 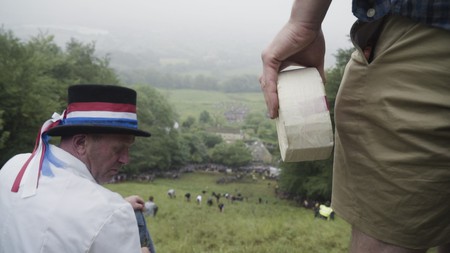 The man tasked with starting the race is Stewart Hendry. Having decided that neither his physique nor his mentality suited chasing cheese, Gerrard became the race’s official starter four years ago and it’s something he is extremely proud of: ‘People ask me where I’m from no one’s heard of Brockworth, but everyone has heard about cheese rolling,’ he says.

Hendry has Brockworth in his blood. His grandfather is from the village and his father was a local councillor that helped keep the historic event alive. Gerrard explains: ‘A big multinational company tried to buy the event, essentially through sponsorship, and offered £150,000 [$200,635]. The local committee that my dad sat on rarely agreed on anything, but the only time they all agreed unanimously on an issue was when they voted against this corporate takeover. I love the fact cheese rolling is still a local event run by just six people. We’ve got it, no one else has.’ 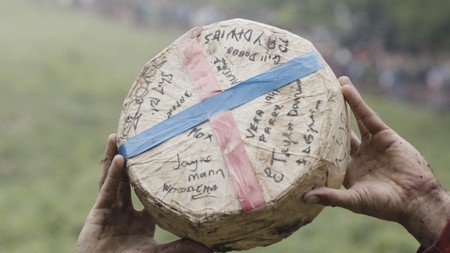 Competitors must chase a four-kilo wheel of cheese | © Culture Trip

There are varying theories on the race’s origins, but one seems more prevalent than others: ‘The most common one is that it was part of a pagan festival that celebrated fertility and harvest for spring,’ says Hendry. ‘Cheese used to be very valuable and so winning a wheel was a big deal. The Lord of the Manor would roll cheeses down the hill and the winner could expect a good harvest. It all made up a wider festival, but parts have gradually fallen away. The cheese rolling has remained because it’s unique to the world.’

In the world of competitive cheese rolling there is a clear front runner. In 2018, Chris Anderson became the most successful cheese roller of all time, winning this brutal race for the 22nd time.

‘I do it for Brockworth,’ Anderson says. ‘The villagers like having a local winner and I like doing it for the village. Not a lot of people have the balls to do it – you have to have a total disregard for yourself and that’s how I’ve managed to win so many times.’ 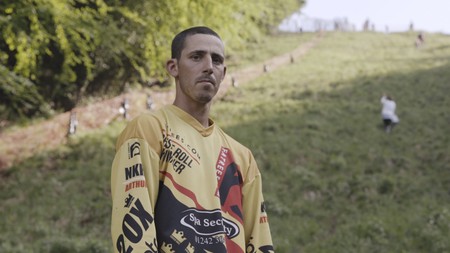 As an elite athlete at the top of his game, Anderson starts and ends the race as one would expect – in the pub. It’s here he has his pre-race breakfast, and where he heads to for a few free drinks afterwards. That is if he hasn’t suffered a bad injury, which is, unsurprisingly, very common. Anderson recalls how ‘a few years ago a guy snapped his leg and in 2009 someone broke his neck, he was OK, he just can’t do cheese rolling anymore.’ And the 22-time champion has had a few bumps and scrapes of his own: ‘I’ve bruised my kidneys and broken my ankle, although that was from jumping up and celebrating after I’d won one year.’

Last year, 15,000 people watched the day’s events. There are different races for men, women and children, as well as uphill races. Hendry says that choosing your viewing point depends on what you’re after as a spectator: ‘From the sides you get to see the speed, from the bottom you get to see the winner, and from the top you get an understanding of just how steep the hill is.’

And what does the winner get for putting their life in danger? The cheese, of course. Great if you like four kilos of double Gloucester, not so much if you’re lactose intolerant.

‘I don’t even like the cheese’ says Anderson ‘I give it to my family every year’.