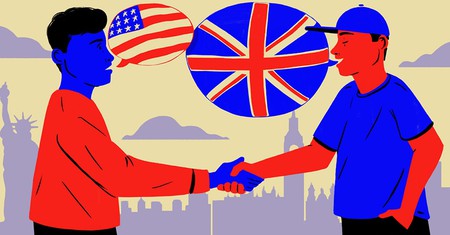 Parrish Turner
Us Books Editor29 May 2018

Did you know that Brits use the word “please” almost twice as often as their American counterparts?

Americans and Brits obviously use the English language differently. “Pants,” “chips,” and “rubber” are just the beginning of the list of words that have vastly different meanings depending on what side of the pond you’re on. These words make for fun jokes, especially with words that are innocuous in one country and naughty in the other.

Rules around word etiquette can be trickier. British and American English are similar enough that we shouldn’t offend each other with a word as polite as “please,” right?

The fact that Americans use the word “please” half as often as Brits was long attributed to the idea that the British were just more polite than Americans. While that explanation satisfies some, linguist Lynne Murphy wanted to know more. She set out to discover if Americans were simply not saying “please” or if there was a difference in the way the two dialects utilized the word. She, along with linguist Rachele De Felice presented their findings which suggested that, while “please” was defined as an utterance which conveys politeness, its presence in American English was sometimes received as less polite. American English seemed to have a threshold for the word and using “please” too often was seen to be “bossy” and “patronizing.” However, in British English, respondents felt they wanted to hear “please” whenever possible so as not to come off as “bossy.”

One explanation is that Americans use the word to help distinguish between large and small requests. “Could you pass me the salt?” and “Could you help me assemble IKEA furniture?” are requests at different levels of magnitude. For Americans, the use of please can help communicate an understanding of the largeness of the request.

Much of the research of Murphy and De Felice is based in Brown and Levinson’s “Politeness Theory.” The theory states that humans have an innate desire to be treated with politeness, but the rules of politeness vary greatly. Every culture puts a different level of value on “deference,” which in this case means “humbled submission and respect.” It is related to the idea of hierarchy. Culturally, Americans place less importance on difference and hierarchy than Brits. This difference can be seen in many other areas of culture beyond just the singular word “please.”

Not every language even provides an equivalent for the word “please.” For example, in Danish, there is no dedicated word for making your language more polite. Many languages, such as Punjabi and Korean, communicate respect through verb conjugation. Russian, on the other hand, combines “please” and “excuse me” into one word: пожалуйста. So individuals coming to English-speaking countries have the double duty of learning new etiquette as well as matching it to the expectations of wherever they might be at a given time.

Culturally, both Americans and Brits agree that British English is probably the fancier and more polite dialect, and it could be that the frequent use of “please” lends itself to that interpretation. Americans are also known for being more direct, so avoiding extra words in requests makes a lot of sense.

Of course, there are even more forms of English than just those spoken in the United Kingdom and United States. Each of these different dialects have slight variations of their own. It can get a little overwhelming. At the end of the day, being polite comes down to making the other person feel valued and respected. If you use “please” whenever possible, or save it for special occasions, a single word will hopefully not make or break your interaction with your friend across the pond.