Meschac Gaba’s Museum of Contemporary African Art at the Tate Modern is a witty and enjoyable installation that subverts many Western viewers’ preconceptions about African art. The vast show raises questions of inherent value and the differing contexts of Art, Artifact and Trade Objects, seen through the prism of both Western and African cultures. 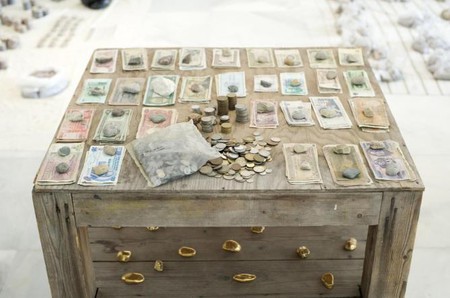 Art and the Institution: it is a topic of debate that has motivated so many artists, from Marcel Broodthaers to Mark Dion. Yet it remains a pertinent topic, as the determination of what should be included, and what – or who – left out, is a politically loaded issue. Despite living in the Information Age, Museums continue to write the linear narrative of cultural history. Thus, for so many people in the West, African art is not to be found in the contemporary art gallery, but in the historical displays of Fon sculpture and Vodun masks in institutions such as the British Museum.

The Ethnographic aesthetic is far too easily associated with the continent, and until relatively recently collectors and curators have remained wary of — or simply disinterested in — looking at works that might deviate from this model; as a result, it is all that viewers in the West have been exposed to. When Meschac Gaba started creating work as part of his residency in the Rijksakademie in Amsterdam in 1997, he decided to call it the Museum of Contemporary African Art because, as he explained at the time, ‘I don’t know anyone who has created a museum of contemporary African art. So I’m doing it before anyone else does!’

This vast installation, the result of a body of work created between 1997 and 2002, was first displayed in the Rijksakademie after the residency, and is currently being shown at the Tate Modern in a landmark exhibition. But if Gaba’s intricate installation is a Museum, then it is certainly not a museum as we know it. Throughout the show, there is the rigorous refusal to adhere to a systematic taxonomy that marks any self-respecting museum: gone is the desire to educate, or indeed even to impose a predetermined order onto objects that might elide such categorisation. Instead, the exhibition becomes an oblique catalogue and insight into the working practice and life of Gaba, and an exploration of the notions of value and inherent worth. 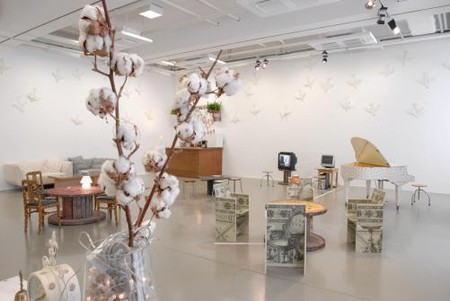 The show contains 12 rooms, each with its separate purpose and overriding theme, yet it is not disparate, for there is a consistent aesthetic and thread of ideas that weaves throughout. Entering the show, the viewer is confronted with ‘The Draft Room’. Like the establishing shot of a film, this room sets up the fundamental themes of the Museum, as ‘The Draft Room’ seems first and foremost a cataloguing of currency. Gilded pennies, dots cut from banknotes, ceramic breads glazed gold; all are a witty play on the vastly differing contexts of a Museum Object and an object of trade. Cast chickens in porcelain, either piled in a corner or displayed in a freezer, allude to abundance and also waste. Whilst intentionally ridiculous, these objects are also a crucial reminder of one of the few objects that cannot lose its inherent value as a tool for survival.

Paper money is a medium that Gaba has employed sculpturally since, in the late 1980s, the artist found a bag of decommissioned banknotes in Cotonou, and told a friend, ‘I found the gold, I found the million.’ In museums up and down the country, glass cabinets contain currencies both past and present from across the world. Transformed into museum artefacts, they are displayed for their Historical Importance, whilst their purpose as actual currency is void. Looking at the cowry shells that were used as currency across Central Africa and Asia until the mid 19th century, it seems odd, almost quaint, that so much importance should be given to a shell. Until you consider that — with the printing of banknotes that are unbacked by gold reserves — so many countries are today trading in paper money that is essentially worthless. Here in the Tate, piles of decommissioned notes punctuate the show, along with the banknotes Gaba has printed himself, with Picasso’s face on them: both an apt reminder of this ephemeral value of currency. 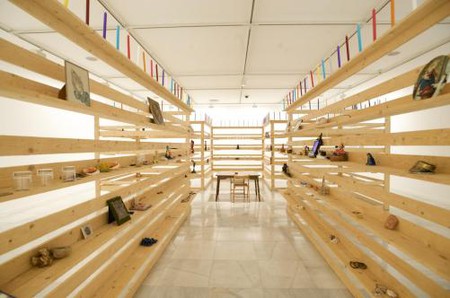 Throughout the show, Gaba seems adamant in his desire to remind the viewer that what is perceived as inherent value can easily be dismantled. This is blatant in the interactive spaces of the show, such as ‘The Architecture Room’, a space that, with its wooden building blocks on blue carpet, asks viewers to construct — and dismantle — their own work; or ‘The Game Room’, with sliding puzzles that can be rearranged to the flags of Algeria, Angola, Chad, Morocco, Senegal and Seychelles respectively. Along with devaluing the art objects as something that must remain untouched, these playful areas are a return to the interactive displays in museums designed to spike children’s interest; yet they seem to appeal to both adults and children alike. Gaba is clearly highlighting the fact that the encouragement of fun remains a novelty within the gallery environment.

The apparent opposition between object as artefact versus object as currency is played out most explicitly in the ‘Museum Shop’ section of the exhibition. Here, Gaba’s contemporaries at the Rijksakademie provided objects for display in the section, laid out on palettes. Whilst these were available for viewers to purchase in the show at the Rijksakademie, here they are now permanent objects in the collection. There are things you can purchase, though: T-Shirts, pencil cases, exhibition catalogues.

It could be seen as ironic that Gaba’s initial vision is inevitably compromised when translated to a gallery with such a high profile as the Tate. Perhaps this was hinged on the decision of what was more important: the symbolic gesture of their placement within a market, or their actual availability. Yet it seems more likely to be a simple issue of logistics: for with such high visitor numbers, carrying only limited edition objects, the store would undoubtedly become empty in a day. A market that is empty is no longer a market, so it makes sense to sell items that can be easily replenished. Further, it is easy to imagine one these objects emerging on eBay with an extortionate bidding price, subverting Gaba’s attempts at devaluation. So the items you can buy in the store remain similar to what is obtainable in any Museum Shop, yet somehow the act of purchasing them within an exhibition is an uncanny experience almost impossible to pass off, even if the items are worthless. 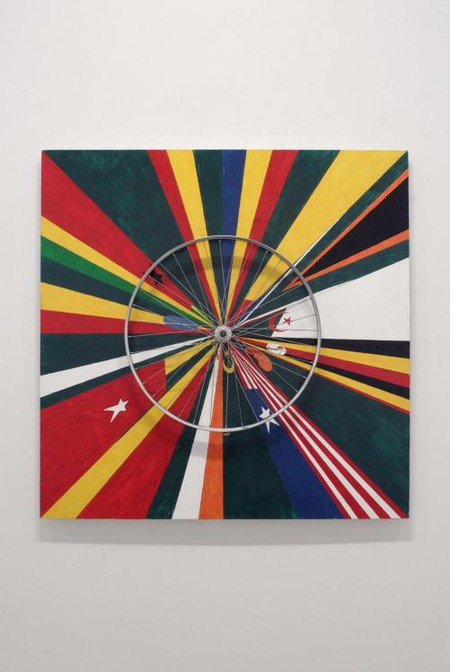 Yet this desire to disrupt codified value is explored through more subtle means, as well. Throughout the show, Gaba’s artistic output is maniform, taking in ceramics, collage, painting, assemblage and found object. The Found Object is often first attributed to Duchamp’s Fountain, in which a urinal, scrawled with the signature of an imaginary person ‘R. Mutt’ became a work of Art, simply because Duchamp termed it as such. This avant garde gesture changed the face of contemporary art history, so much that it is seemingly impossible to escape the long Duchampian shadow when using the Found Object. Yet Gaba’s seamless integration of self-fabricated work with found objects, and pieces that have been augmented or reappropriated, is an approach that is radical in its lack of preciousness.

Displayed side-by-side with a nod to an oblique archive, sculpture, painting, commissioned structures and found objects become so much stuff whose origins are rendered almost irrelevant. In this light, the entire installation becomes a vast, three-dimensional collage. Yet along with being a complete dismantling of how objects are read, it is also a complete redefinition of how the space of the Museum can be read, and also how it can function.

Galleries are increasingly becoming spaces for expanded experience and viewer participation. Indeed, this is something that has been done at the Tate, with pieces such as Olafur Eliasson’s The Weather Project, or Carsten Höller’s slides. Yet rarely has it been done with such intricacy, or such humour. There may be an ever-widening repertoire of reactions we expect to have in a museum or gallery, yet out-loud laughter is still not one of them. In Meschac Gaba’s idea of a Museum, laughter is not only permitted, it is encouraged. It is not a recategorisation of what a Museum should be: it is a complete overhaul of the idea that a Museum or Gallery ‘should’ be anything predetermined: it can be a space for playing (‘The Games Room’), for eating (‘The Museum Restaurant’), for listening to, or playing music (‘The Music Room’); indeed, it can even be a place to get married in, as Meschac Gaba and his wife did in the Stedelijk Museum, Amsterdam, in 2000, documented with photographs and ephemera in ‘The Marriage Room’.

Fun still seems to be a word the art world shies from, yet encouraging active enjoyment need not be at the expense of intellectual rigour. Meschac Gaba’s ‘Museum of Contemporary African Art’ may not be a Museum in any conventional sense of the word: there may be no clinical or chronological display, you may not be overwhelmed by historical fact, but you will learn something. The installation is a wry and witty take on a museum that allows the viewer to question the implicit structures of present-day museums but also, present-day culture.
By Rebecca Jagoe

Meschac Gaba: Museum of Contemporary African Art is on at the Tate Modern 3 July – 22nd September 2013. To find out more click here.