An Introduction To Elton John In 10 Songs 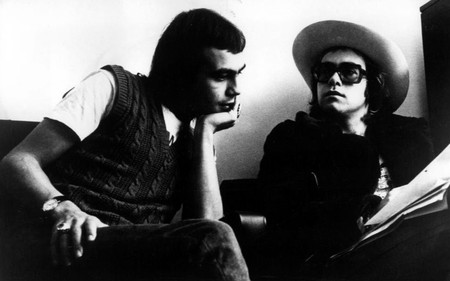 Born in Pinner, Middlesex, in 1947, Elton John is one of the most respected names in music. Known best for his extraordinary songwriting (in collaboration with songwriting partner Bernie Taupin) and a voice that could bring even the most stoic individual to tears, his career has spanned over half a century from his humble beginnings as a staff songwriter, to royal acclaim as a knight of the realm.

Having started his songwriting career in the 1960s, it’s impossible not to see the influence of the Beatles in John’s work. Having admired their work for a long time he struck up a friendship with John Lennon and worked with him on a few songs. Empty Garden is John’s musical eulogy to the tragic news of Lennon’s murder.

The haunting melancholy that hovers over John’s vocals is furthered by the context in which the song was recorded. It is a near perfect example of the use of music to lament the pain of loss. The lyrics and music work together to shed light on the human consequences of the murder of a public figure.

The title track of the 1973 album, Goodbye the Yellow Brick Road is a tale of one man’s struggle to go back to the simpler, happier times of his youth. Referring to the Wizard of Oz (the first film Bernie Taupin ever watched), the metaphorical bridge refers to the idea of seeking life’s answers by abandoning our roots, however, we are asked to consider whether greater joy would be found in the place where we started.

John’s voice carries the lyrics to a near transcendental level, as the listener is swept up in the song’s fantastical but instantly recognizable imagery. By the end of the song you’ll have come to the same conclusion as John, Taupin, and Dorothy – there’s no place like home.

New York City has been the subject of more songs than any other place on the planet, but few of them approach their subject with the same tenderness and devotion as Mona Lisas and Mad Hatters. The song is a celebration of the eclectic bunch of eccentric characters that inhabit the bustling metropolis.

Shortly after the attacks on the twin towers in 2001, he performed the song at a concert as a tribute to the strength and beauty of the city. He has subsequently dedicated the song to the brave emergency workers and their families who worked tirelessly during the attacks.

Famously written for The Lion King, can you feel the love tonight won him an Oscar, a Grammy, and a Golden Globe. The version sung by Kristle Edwards, and the rest of film’s crew, is the more famous version but John’s own version is an emotive experience in itself.

The lyrics were written by Tim Rice, with Elton John composing the music. The result is a love song for the ages, whether the star-crossed voyagers are people or lions.

After a break from their partnership, Taupin’s return to his role as John’s key lyricist brought about another classic. With Stevie Wonder playing the harmonica, I guess that’s why they call it the blues was a song that cemented John’s place amongst the musical greats.

The song itself is a simple lament from one lover to another about their forced separation and the desire to be reunited; all set to a blues-rock melody. A truly superb singalong track.

Originally recorded in 1977, the decision to revisit the song in the early years of the 21st century proved to be a masterstroke, as it catapulted John to the top of the UK charts for the fifth time. Little change was made to the song (except shortening the song duration) but a new generation of fans of the musical maestro was born.

The song’s content focuses on a theme that recurs throughout John’s discography, love. It’s an upbeat take on pursuing and retaining love that is utterly infectious.

The lunar landings in 1969 are said to have been one of the most significant events in the history of humanity’s understanding of itself, as we became aware of how small we were in comparison with the whole universe. As a result, artists of all descriptions clambered to articulate this newfound awareness. Elton John’s Rocket Man is often considered to be a song written in reaction to David Bowie’s Space Oddity.

The genius of the song’s lyrics, once more penned by Taupin, is to bring a human element to astronauts who had become cultural metaphors for progress and exploration. However, John’s emotive vocals mixed with Taupin’s articulation of the loneliness felt by these brave pioneers, make this into one of the greatest songs ever recorded.

Recorded for the album Too Low for Zero, I’m still standing is a rare song that allows the listener to simultaneously rock out, and dance the night away. It plays with and blends together glam rock, piano pop, and soul.

The electricity of John’s composition and Taupin’s lyrics about the breakdown of his first marriage, created a hit that defies genre categories but encapsulates a feeling of independence and resilience. The ultimate feel-good breakup tune!

There are few piano riffs as iconic as the opening of Tiny Dancer. The song builds effortlessly from its country-esque beginnings into one of John’s most recognizable and powerful ballads.

Written about a Californian girl that Taupin had met, her beauty has been immortalized by John’s powerful vocals. It’s re-entry into popular culture through Cameron Crowe’s 2000 film Almost Famous, is a testament to the song’s timeless quality and near-universal appeal.

Elton John’s first hit is an enduring classic. Covered by the likes of Rod Stewart, Ellie Goulding, and even Ewan McGregor in Moulin Rouge, it is a love song for the ages – full of innocence, hope, and above all, absolute adoration.

Taupin’s often self-deprecating lyrics are both lightly caressed and belted about by John through the course of the song. It’s the simple tale of giving the gift of song to someone you’re infatuated with. It perfectly captures the hopelessness we all feel in the face of gut-wrenching, earth-shattering infatuation and love. Your Song is the ultimate embodiment of Elton John’s musical genius.