Incredible Places You Have To See in Cornwall 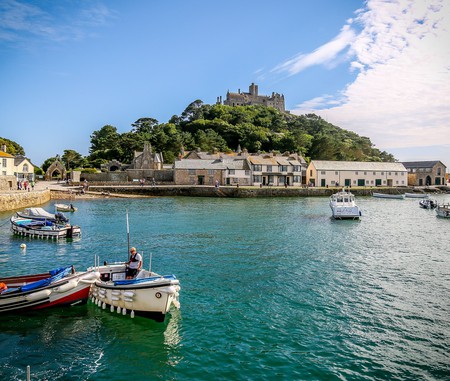 Cornwall is a wonderfully rugged place, situated as it is in England’s south west region. There’s so much to do and see, with dramatic cliffs and coastlines on the north coast, picturesque fishing villages along the south coast and unspoilt wild moorland in between. Here’s our list of the best places to visit when you go to Cornwall.

The phenomenal Eden Project is one of Cornwall’s most famous and fascinating attractions, with multiple awards to its name. Allow a good day or more to explore the vast biodomes that house the largest indoor tropical rainforest. The Eden Project is an enriching, inspiring and educational voyage, highlighting the connections between people, plants and the planet. 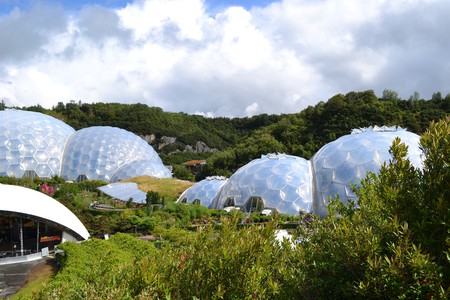 The biomes at The Eden Project | ©pixabay

Covering 200-acres, there’s always space to lose the crowds and find yourself in the Lost Gardens of Heligan, even in the height of summer. The gardens have been designed in the 19th century Gardenesque style, so they’re divided up into different areas, each with their own unique character. Highlights include the Jungle and the Pleasure Grounds, where you can see the gorgeous camellias and ancient rhododendrons. Combined tickets granting entry to both Heligan and the Eden Project with a 10% discount can be bought here. 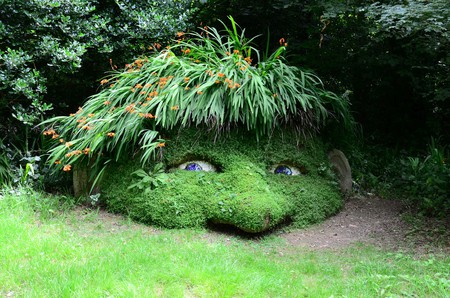 Gnome sculpture at the Lost Gardens of Heligan | ©pixabay

Clinging to the cliffs above the Atlantic Ocean, this glorious open-air theatre is as dramatic as any of plays, musicals and operas staged there each summer. The theatre was constructed above a gully with a rocky granite outcrop that juts out into the sea and is reminiscent of an ancient Greek amphitheatre. Unsurprisingly, the name Minack comes from the Cornish word ‘meynek’ meaning a rocky or stony place, but if you fancy something more lush and exotic, head to the sub-tropical gardens to see rare plants usually found in the Canary Islands, South Africa, Mexico and the Andes. 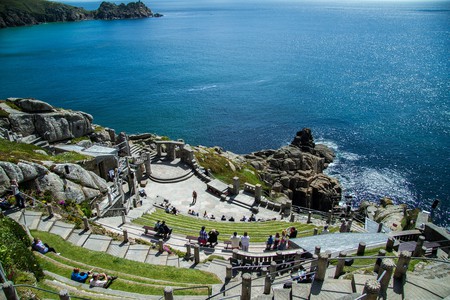 There’s no shortage of amazing beaches in Cornwall, but Porthcurno is so spectacular that some say it’s the best beach in the entire county. It also has a fascinating World War Two history, as it was the base of a major international submarine communications cable station, which kept the UK in touch with the Allies. A network of tunnels was also made into the granite valley, which visitors can explore. To find out more, head to the Porthcurno Telegraph Museum. 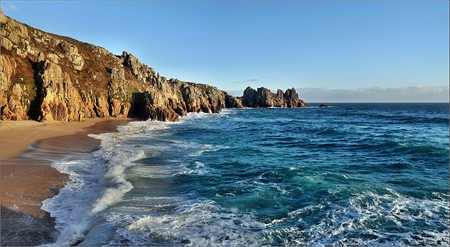 A designated Area of Outstanding Natural Beauty and also a World Heritage Site, St Agnes has it all; stunning coastal walks, great wildlife, a vibrant village and amazing views. A visit to the former tin mine Wheal Coates gives you an insight into the area’s mining history and there are wonderful cliff top views. 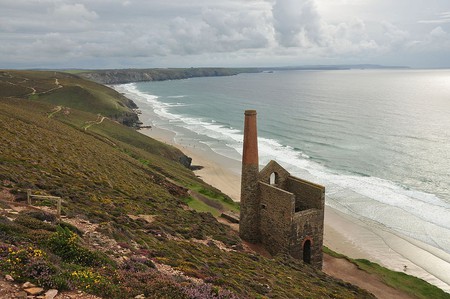 One of the UK’s most famous landmarks, Land’s End on the Penwith peninsular is rugged and unspoilt, with a dramatic austerity and 200-foot high granite cliffs overlooking the Atlantic. It’s the most westerly point of the country and is popular with keen birdwatchers. Follow the South West Coast Path to nearby Sennen Cove, a renowned surfing spot. 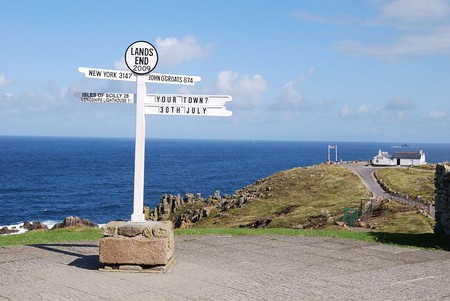 Carnewas and the Bedruthan Steps

On this rugged coastline from Carnewas to Park Head, legend has it that a giant called Bedruthan used the large, pointed rocky stacks as steps to make his way across the bay. There’s a definite feeling of shipwrecks and smugglers here, with lots to interest geologists as well as a mining history dating back to the 19th century. 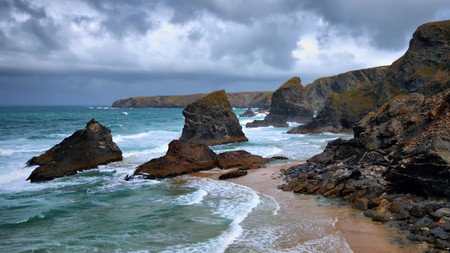 As the most southerly tip of England, Lizard Point has a treacherous coastline, so a lighthouse was built in 1751 to help sailors navigate the choppy waters. It’s the only one in Cornwall possible to climb, and the views from the top are stunning. If you have time, walk the coastal path for approximately two miles north to nearby Kynance Cove. You’ll see pretty flowers en route as well as the area’s local serpentine stone, which is dark green veined with red and white. The cove is so picturesque it’s said to be the one most photographed and painted in Cornwall. 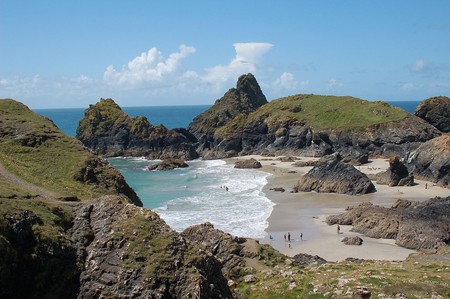 Believed to be the birthplace of the legend of King Arthur, Tintagel Castle is a medieval fort with a mythology as evocative as its appearance. The castle was built in the 1230’s by the 1st Earl of Cornwall and straddles the mainland and the jagged peninsula, boasting spectacular sea views. Below the castle at low tide one can explore the small beach Tintagel Haven and Merlin’s Cave, a 300-ft long tunnel that passes through Tintagel Island below the castle. 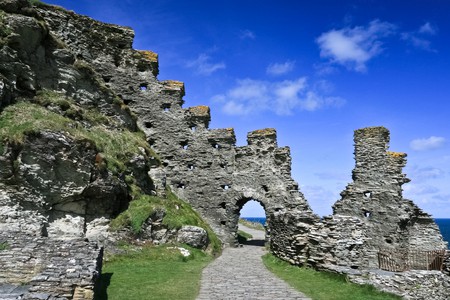 Visitors to the striking medieval castle and church atop the small rocky tidal island of St Michael’s Mount get to enjoy a mini-adventure before arriving; the island is accessible on foot across the causeway at low tide so at other times you hop in a boat to make the crossing. Once there, soak up the castle’s ambience and rich history, and wander around the glorious gardens.

Open all year round, these gorgeous sub-tropical valley gardens have something for every season. In spring the 100-year-old rhododendrons, magnolias and camellias are a riot of colour. The giant gunnera is best in the summer and during autumn it’s time for the blue and white Hydrangea Valley to take centre stage. Winter is all about the beautiful trees. The gardens make a great family day out as there are special children’s trails and an adventure playground, plus access to a private, secluded beach on the Helford River with views out to the sea. 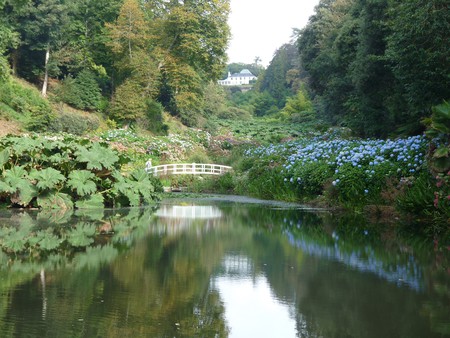 Fans of woodland walks will really enjoy St Nectan’s Glen, which many visitors consider to be beautiful, tranquil and mystical too. At the main waterfall, St Nectan’s Kieve, the river Trevillet has carved its way through the slate and punched a hole so that the water gushes down 60ft into the kieve (basin). There are also two other waterfalls to enjoy, as well as the woodland walk alongside the river. 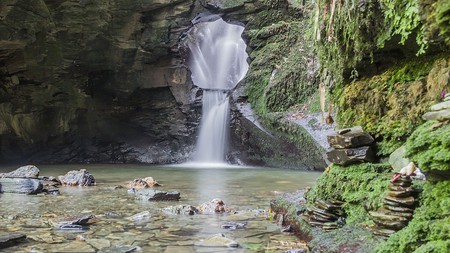 The vast expanse of Bodmin Moor offers a wildly different experience to most of Cornwall’s coastal hotspots. It’s an ancient moor sprawling across 80 square miles, dotted with craggy granite tors that reach into the sky, including the highest point in Cornwall, ‘Brown Willy’. With so much history and folklore, Bodmin has long been a muse for numerous artists and writers, who source inspiration from its dramatic vistas. 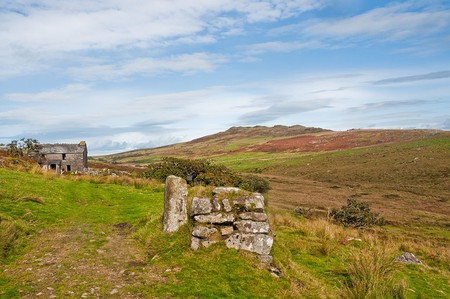 Widely regarded as Cornwall’s best beach, Perranporth is three miles long with ample space for the surfers and sun-worshippers who enjoy the soft clean sand and the lapping waves. There’s something here for everyone, with rock pools to explore and cliffs to climb, as well as a pub right on the beach for a sundowner. 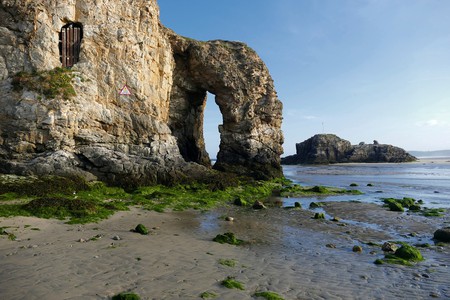 Perranporth | © Pixabay
Give us feedback