These Are the 11 Biggest Cheating Scandals in Sporting History 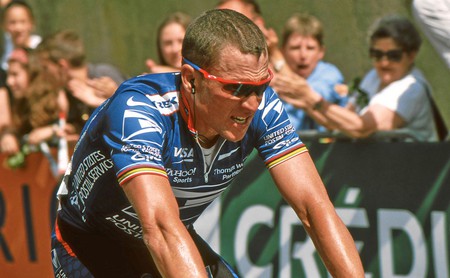 From steroids in Sochi to betting on baseball, from feigning injuries to faking disabilities, these are the biggest cheating scandals in the history of sport. Do you agree?

In 1919, eight members of the Chicago White Sox team were accused of throwing the World Series against the Cincinnati Reds as part of a gambling ring headed up by racketeer and gambling kingpin, Arnold Rothstein. The “Black Sox Scandal” is where the famous quote “Say it aint so, Joe?” comes from, when a child pleaded with “Shoeless” Joe Jackson that he and his teammates hadn’t thrown the game, although Jackson later confirmed that the exchange never happened. The players were banned for life and illegible for future honours, such as Hall of Fame consideration.

At the heart of “most sophisticated doping programme in the history of sport” was seven-time Tour de France winner Lance Armstrong. In a sport riddled with doping scandals throughout its history, and after decades of denial, Armstrong eventually admitted to doping in every single Tour win. While he was far from the only cyclist in the peloton to dope, it was the sheer power he wielded over his teammates, and even rivals, that was so alarming. The scandal has already led to a Hollywood film, two (excellent) feature length documentaries and a number of books.

Spain won the basketball ID event at the 2000 Paralympics, however, it was later discovered that 10 of the 12 players had no disabilities whatsoever, and had deliberately failed IQ tests before the Games. The medals were stripped from the Spanish team and all events for athletes with intellectual disabilities were subsequently removed from the next two Summer Paralympics as a result.

In the 1960s, 70s and 80s East Germany won a host of Olympic medals, smashing world records in the process, particularly in the pool. Fast forward to the 21st century and nearly 200 East German former athletes sued the German pharmaceutical giant Jenapharm for supplying them with steroids throughout their career. The state-sponsored regime used the anabolic steroid Oral-Turinabol, which built muscle and improved recovery, but subsequently led to athletes suffering from cancer, heart problems and infertility. Many of the athletes had no idea what was happening, being told the steroids given to them by coaches were vitamins. All was revealed with the end of Communism and the reunification of Germany. 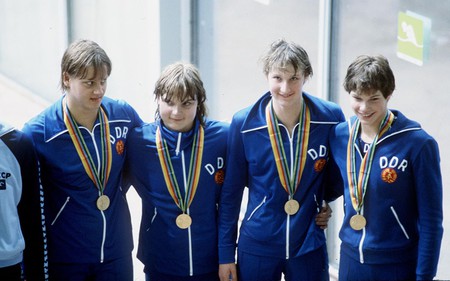 In rugby, a blood injury to a player means that they have to be substituted to be treated, even if the player coming on has already been taken off (they wouldn’t ordinarily be allowed back on). In 2009 Harlequins winger Tom Williams secretly bit a fake blood capsule (given to him by his coach Dean Richards) so that he could be brought off for Nick Evans, who had been substituted earlier. Quins lost the match anyway, but the rouse was rumbled, Williams was banned for four months and Richards for three years.

Rosie Ruiz won the Boston Marathon with an impressive time in 1980, but suspicions were raised when her time was discovered to be too impressive, posting a time 20 minutes faster than her previous best. She was stripped of her win when it became apparent that Ruiz had left the race, taken the subway, and rejoined miles later.

In 1994 the darling of the American ice skating world Nancy Kerrigan was attacked by a man with a baton, who hit her across her knee, forcing her to miss the U.S. Figure Skating Championship. It was later alleged that the attacker was sent by Kerrigan’s compatriot and skating rival Tonya Harding. Harding denied being involved, but she was found guilty of obstructing the investigation and banned from the sport. The barely believable story was turned into the Oscar nominated film I, Tonya, in 2017.

In the NFL all footballs used have to be inflated to a certain pressure. Letting some of the pressure outs makes the balls easier to throw and to catch, and is exactly what the New England Patriots were found guilty of in the AFC playoffs in 2015. The Pats were fined $1 million, had to give up draft picks and star quarterback Tom Brady was banned for four games.

Brought to light by the brilliant documentary Icarus, Russia instilled a state sponsored doping programme across a number of different sports for the last 50 years, according to whistleblower and former director of Russia’s national anti-doping laboratory, Dr. Grigory Rodchenkov. Although the accusations cover various sports over a long period of time, it chiefly concerns the 2014 Winter Olympics in Sochi. The 2016 McLaren Report, commissioned by WADA (World Anti-Doping Agency), showed that a “state-directed failsafe system operated for the protection of doped Russian athletes” and that it could be shown that it was “beyond a reasonable doubt”.

The Calciopoli scandal involved five football teams, two leagues and a number of referees, with the latter coerced into rigging games in 2006. Intercepted telephone conversations showed the general managers of Juventus (Italy’s most successful club) spoke with several officials about the appointment of particular referees. Four clubs (AC Milan, Fiorentina, Lazio and Reggina) were given points deductions, while Juventus were relegated a division, had two league titles stripped and their managing director Luciano Moggi banned from football for life.

Looking back at Ben Johnson’s 1988 Olympics triumph, it’s a wonder he wasn’t popped for doping at the start line. With his muscles bursting at the seams and bloodshot eyes fixed in a steely glare, it’s of little surprise that the Canadian tested positive for steroids later that day. That said, at the time it was the biggest doping scandal in living memory. Interestingly, every single athlete in that final has since tested positive at some point in their career. 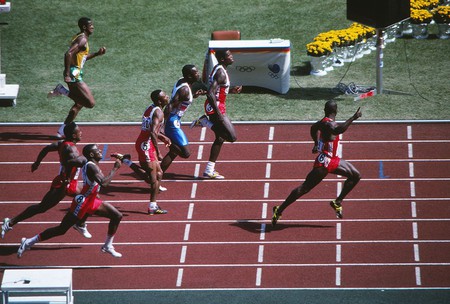 Mandatory Credit: Photo by Colorsport/REX/Shutterstock (3149746a) Athletics - 1988 Seoul Olympics - Men's 100m Final Canada's Ben Johnson (#6) raises his hand as he easily wins the race from the chasing pack including the USA's Carl Lewis (#3) and Great Britain's Linford Christie (#4) in the Olympic Stadium Seoul Sports Complex Seoul South Korea Johnson won the race in a new World Record of 9 79s but three days later was disqualified after testing postive for anabolic steroids Lewis was then awarded the gold and Christie the silver South Korea 1988 Seoul Olympics: Men's 100m Final Sport | © Colorsport/REX/Shutterstock
Give us feedback