The Most Stylish Shows On TV This Year 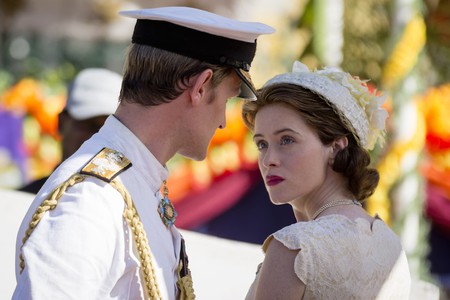 2017 has been blessed with a slew of outstanding television shows. And whether it was the creepy 80’s aesthetic of Stranger Things or the full-blown haute-couture costumes in The Collection, there was ample style inspiration too. As the biggest-ever TV production, The Crown came back for season 2 in all its regal splendour, while Joan Didion’s documentary provided major literary glamour. Culture Trip looks back at the most stylish TV shows this year.

Joan Didion: The Center Will Not Hold

Moving and celebratory, the Joan Didion Netflix documentary not only told the story of her momentous work but also brought viewers her androgynous, timeless style. The author, who has previously fronted campaigns for Céline, provided ample inspiration through her oversized suit jackets and the way in which she consistently sported sunglasses – whatever the occasion.

The latest from The Wire creators George Pelecanos and David Simon, The Deuce tells the story of Times Square’s underground scene in the 1970s. Full of fabulous flares, cream two pieces and leather jackets, the show received mixed reviews but more than delivers on retro style.

Celebrating the origins of the women’s wrestling scene, GLOW puts bright lycra and big attitudes at the centre of the ring – with some leg warmers and headbands thrown in for good measure. Seriously fiery style to match a fiery show.

The red cloaks and white bonnets from The Handmaid’s Tale were one of the most iconic pairings of the year, offering a striking emblem for a dystopian age that strongly resonated with many. Red also happens to be the colour of the season, which makes it even more apt.

Master of None, Season 2

It was easy to fall in love with the Italian-inspired season 2 of Master of None, and not only because of Alessandra Mastronardi’s (Francesca) presence. From the chunky knits that Dev and Francesca wear when they’re snowed in to the oversized boyfriend shirts to the polka dot dress and matching shearling coats – there wasn’t a moment when this show didn’t nail the mix of old-school Italian glamour and energetic American style.

Reportedly the biggest budget ever spent on a TV show, The Crown is set during the first decade of the Queen’s (Claire Foy) reign, focussing on her relationship with Prince Phillip (Matt Smith). Costumes perfectly evoke the monarchy in 1940’s Britain, with exact replicas of dresses and suits. It’s Elizabeth II’s crown, though, which takes the throne. If you like Downtown Abbey, you’ll love this. 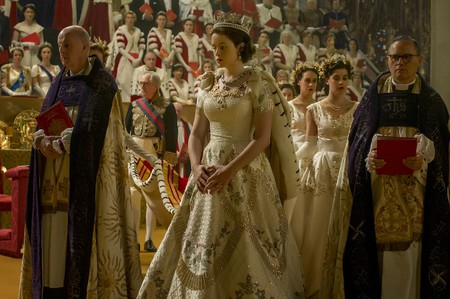 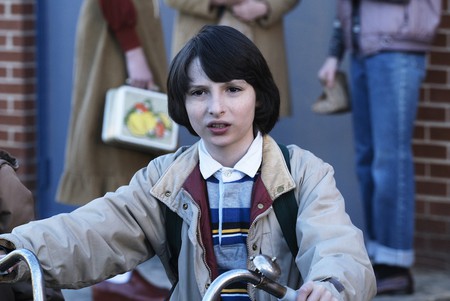 Highland fashion came to Amazon Prime in this weird and wonderful romance/time-travel hybrid. The phrase ‘bodice ripper’ could have been invented for this show, with plenty of tight corsets, baroque costumes and, of course, kilts. 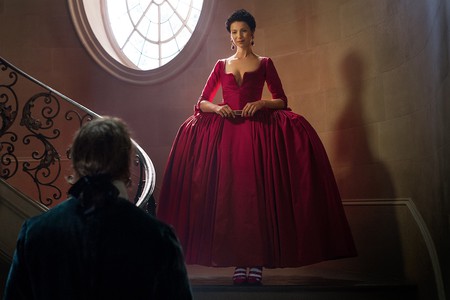 OUTLANDER SEASON 2, | © Amazon
Give us feedback