6 Delicious Cornish Dishes You Have to Try 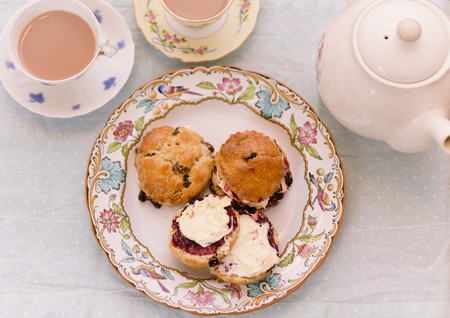 As descendants of fishermen and miners, the Cornish know how to eat, and how to eat well. It’s all about piling on the calories to weather the elements and hard labour that Cornish life once entailed. Most Cornish food comes from the sea and is usually pretty heavy on dairy, therefore not ultimately forgiving on the waistline. Nonetheless, it’s pretty darn delicious! Here are 6 delicious Cornish dishes that you absolutely have to try!

You can’t walk down a street in Cornwall without passing at least three pasty shops. The Cornish pasty is so highly-esteemed, and contested with neighbouring Devon about where it originated, that it has been given Protected Geographical Indication status in Europe, meaning that only pasties made within the boundaries of the Duchy can be called as such.

These tasty parcels of goodness, also known as oggies by locals, are made up of just a few ingredients: local beef, swede, potato, onion, and a healthy dose of pepper, folded and baked in pastry. The crimping at the side of a pasty is considered an art amongst people in the trade, and takes years of practice.

The Cornish pasty originated when Cornwall had a booming tin mine industry in the 17th and 18th centuries. Wives would cook husbands going underground this practical and wholesome meal which would keep them full throughout the day. Back then, meat and potatoes would be in one side, and jam and cream in the other for dessert. The crust was also used as a handle, so that the miners wouldn’t get toxic mine grub all over their lunches; now, the crust is considered the best part, especially if the juices have been left to drip down to the bottom crimp. Yum.

First thing’s first, when you eat a cream tea in Cornwall, make sure to put the jam on before the cream, or you’ll be bordering on Devonshire territory.

The Cornish cream tea is one of the finest ways to spend a sunny afternoon in a garden.All you need is one freshly baked scone (or two), some traditional Cornish clotted cream and locally made strawberry jam. Then, cut your scone(s) in half, lather on a layer of sticky jam, dollop on a good helping of clotted cream, pour yourself a cup of tea, and job’s a good’n!

Better known as heavy cake by those outside of Cornwall, hevva cake is made by mixing flour, sugar, lard, and butter together, then adding milk and raisins to make the dough. Then, the cake is rolled out to 1/2 inch thickness, cut out into circles and baked. To signify the nets that fishermen use, a criss-cross pattern is stamped on the top.

With most of Cornwall being surrounded by water, it seems only natural that the sea is celebrated in its cuisine. But Stargazey pie isn’t your usual fish pie, with fish heads poking out of the pastry lid – you might need a strong stomach to get this Cornish delicacy down you!

The tradition began way back in the 16th century, when the fisherman who inspired the book, The Mousehole Cat, went out to sea in stormy weather to catch fish for the village when they had nothing. The fisherman, Tom Bawcocks, caught seven different types of fish, and baked them into a huge pie to feed everybody, and poked the heads out to prove to everyone the fish were in there.

To this day, Tom and his bravery are celebrated every year in Mousehole on Tom Bawcocks eve, which is the day before Christmas Eve. A parade of lights, music and wicker statues are walked around the harbour, and end with a giant Stargazey Pie being presented and eaten by the village.

The pie is stuffed with white fish – usually pilchards, mackerel or herring – and has a thick sauce made from milk, eggs, potato, bacon, onion and white wine. It is then topped with a pastry lid which the fish poke out of.

Yes, it is a fish head sticking out of a pie. This is how we roll at #christmas in west Cornwall. #stargazeypie #mousehole #tombawcockseve #food #foodporn #cornwall #fish #tradition

Cheese, glorious cheese! Cornish Yarg is a semi-hard, fresh and creamy cheese made from cows milk and wrapped in stinging nettles. The cheese is creamy and soft just under the nettles, but then crumbly and hard in the middle.

The nettles, which were originally used to protect the cheese, cause a tasty and unusual grey mould to cover the outside of the cheese, giving it a flavour which can only be found in Cornwall. The name itself, Yarg, is Gray spelt backwards – the name of the family who first came up with the recipe for the cheese.

Saffron is a spice which is mostly associated with Eastern countries, but thanks to the Romans, Cornwall has strong ties to this yellow spice which miners once traded tin for. Saffron was once grown in Mounts Bay and the Penzance area, where the weather was warm enough for it to grow. As such, the saffron bun was born.

Although it is known as a cake, the saffron bun has more of a bread like texture, and comes in loaves as well as buns. Traditionally, these little yellow cakes were served with a thick layer of clotted cream on top, but now Cornish butter is much more widely used Enjoy with a cup of tea overlooking the sea.