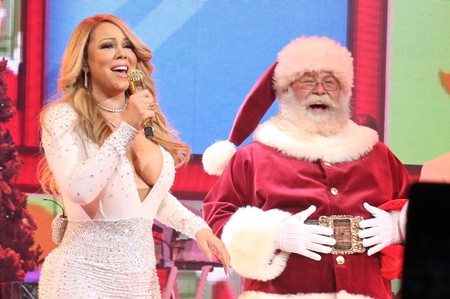 'All I Want for Christmas Is You' concert, New York, USA | © Gregory Pace/REX/Shutterstock

Guilty pleasures. We all have them. And never are they more prevalent than at Christmas.

While you know you should be watching Citizen Kane or finally getting into Breaking Bad, we’ve assembled the films that you REALLY want to watch over the holidays – the cheesy, non-threatening cousins of decent cinema. So sit back, relax and pay around 10% of your attention to these films that you definitely won’t admit you watched.

Watch when: You’ve just booked tickets for the panto

A old-time classic. Four stage performers get together to perform a Christmas show in Canada. While there, they run into the performer’s commander in Word War II, who is in financial difficulties – his quaint country inn is failing. What are the group to do but put on a fun-filled yuletide extravaganza to buck up his business?

Watch when: You’re getting excited about spending time with your parent’s pooch

A troubled foster kid finds out that the animal rescue centre where he works is closing, and he has 12 homes for all the unwanted dogs.

Watch when: You bump into your hot high-school ex in the supermarket queue on Christmas eve

Twenty-something Georgia pines for her old boyfriend and is excited to get given a second chance at love when they both attend their high-school reunion. This has an alternative title: Holiday High School Reunion.

Watch when: You’re weepy after your third glass of sherry and need something to cry to

Little Noelle was born underneath a Christmas star and says she can perform miracles. When trouble comes to her town, it’s up to her to save the day.

Watch when: You’re into the second day of your office party hangover and can’t get over that your work crush spurned you

To the 53 people who've watched A Christmas Prince every day for the past 18 days: Who hurt you?

An aspiring journalist is sent undercover to find a scoop on a handsome prince. But she ends up finding a lot more than she bargined for.

Watch when: You’re despairing at how seemingly incompatible your extended family is

A power cut forces six eccentric New Yorkers to become stuck in elevators in the city, forcing them to consider their life choices. This actually has Patrick Stewart in it, so might be at least slightly justifiable.

Watch when: You just found the perfect festive outfit and you feel fabulous in it

'All I Want for Christmas Is You' concert, New York, USA | © Gregory Pace/REX/Shutterstock

The one and only Mariah Carey hosts a celebrity-studded holiday celebration, with a reading of The Night Before Christmas.

Watch when: You’re wrapping your 17th present of the day and have a bad case of sellotape thumb

When Santa has a bad reaction to a gift bag full of kittens, the moggies step up to deliver Santa’s presents on time.

Watch when: You accidentally reverted to your moody teenage self when your mum asked you to take the bins out

A wayward teen who is sent to her grandma’s ranch for Christmas bonds with the horses and finds a mission: to save the ranch from bankruptcy.

Watch when: You’re feeling sad that Christmas isn’t as good as it was when you were a kid

A Christmas holiday provides the chance for a married couple to reconnect with their daughters and rekindle lost love.

Watch when: You’re so full of Baileys and stilton that you can barely move from the sofa

In the Smoky Mountains, a career woman tries hard to save her family’s berry farm. But then her ex, a country music star, comes back to town and sparks fly.