The Best Outdoor Swimming Pools and Lidos in The UK 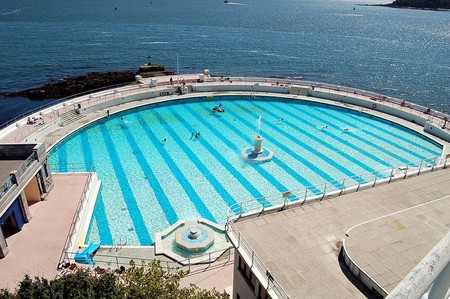 Despite the forever unpredictable British weather, everyone hopes for rising temperatures during the summer, and what better place to spend a hot, summery afternoon than at an open air pool? Everyone knows about famous outdoor pools in London, such as the London Fields Lido and Hampstead Ponds, but lidos exist beyond our capital city. The UK is home to some wonderful outdoor pools, and here is our pick of Britain’s best. 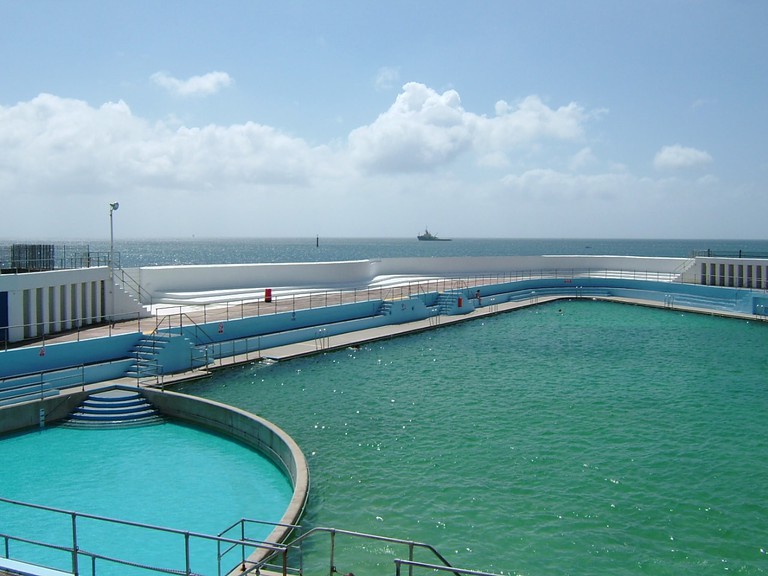 Having opened in May 1935, the year of King George V’s Silver Jubilee, this Art Deco pool is situated upon Cornwall’s Battery Rocks, near Penzance Harbour, and offers spectacular sea views. Its unusual and aesthetically pleasing design, with high streamlined sea walls terraced up within the interior, is designed to cope with the harsh waves of the Cornish coast. Following a ferocious storm in February 2014, Jubilee Pool was forced to close, but re-opened in 2016 and remains a great place to swim today from May to September.

Built in 1927, this historic family attraction is a Grade II-listed lido, and was restored into a 21st-century Art Deco masterpiece, while preserving the original turnstiles and wooden cubicles from the 1920s. The Lido boasts three heated swimming pools, hosts an inflatable obstacle course, zorbing wheels and paddle boats. It also claims to have attracted the likes of singer Sir Tom Jones and Jenny James, swimmer of the English Channel. The Lido is surrounded by the town’s permanent Ynysangharad War Memorial Park in Pontypridd.

One of the largest outdoor pools in the country, this Lido is surrounded by the beautiful gardens of Sandford Park, creating a spacious and scenic area to relax. First opened in 1935 and refurbished during 2006 and 2007, this open air, heated pool was reinstated as the heart of the Cotswolds Spa town of Cheltenham. Alongside the 50-metre (165-foot) pool, you’ll find slides, a children’s pool, a paddling pool and a café. Basketball, volleyball and table tennis are also available. 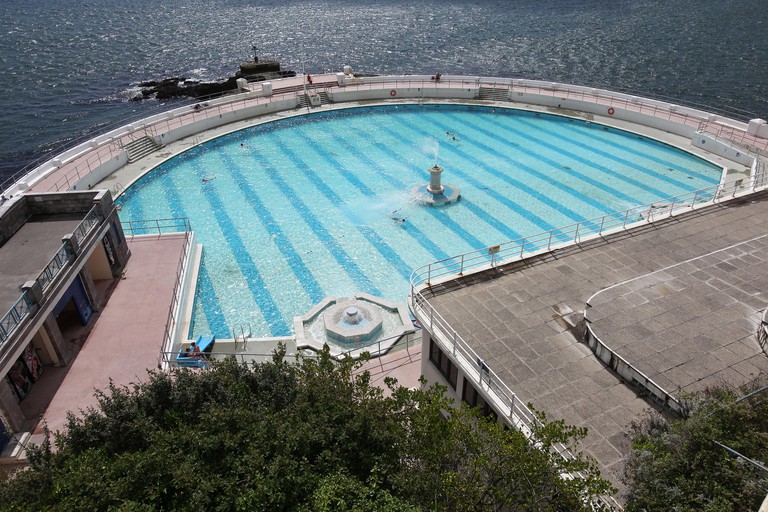 A newly restored Grade II-listed treasure, this beautiful saltwater swimming pool overlooks the tip of Plymouth Hoe. Built in 1935, this spacious Art Deco lido has numerous water features and a sunbathing terrace, providing a wonderful place to soak up the British sun. It has been consistently voted as one of the top ten best outdoor pools in Europe.

Overlooking the serene landscapes of the Cow and Calf Rock Formations on Ilkley Moor, Ilkley Pool and Lido opened in 1935 as part of the Silver Jubilee celebrations for King George V. Designed in the shape of a sliced mushroom, the pool has attracted great architectural interest. The pool is known for being extremely cold, so taking a plunge is not for the faint-hearted. However, there is also a heated indoor pool on sight to retreat to should the chill get too intense.

On its opening day in April 1962, 750 of Portishead’s brave souls took the plunge into the chilly waters of this pool. After years of neglect, the lido was threatened with closure in 2008, but local supporters fought hard for the renovation and refurbishment of this town’s treasure. It’s doors re-opened in May 2009 with the help of TV star, Ty Pennington. The tiered terraces of the green energy heated pool overlook the crashing waves of the town’s coast, with views of Wales on a clear day. The lido is also home to a restaurant and is situated next to the scenic Lake Grounds. 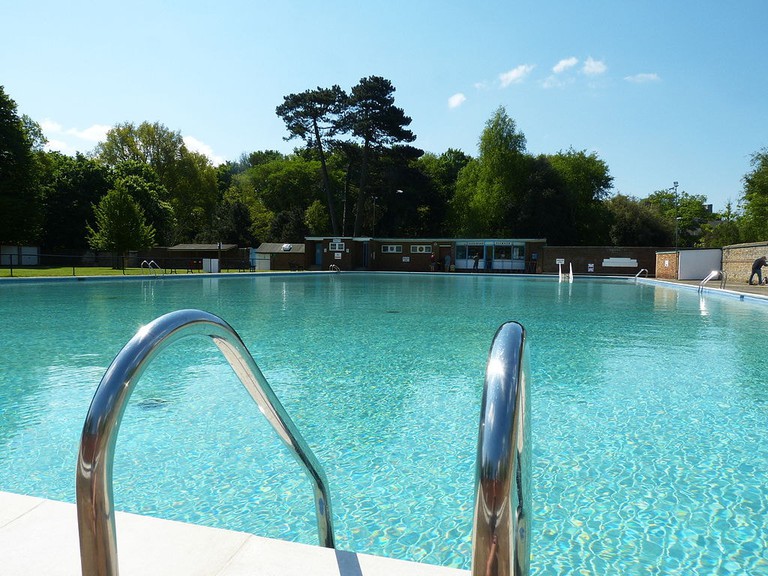 Believed to be the oldest freshwater swimming pool in Britain, dating back 154 years, Pells Pool is unheated and spring-fed. During the Second World War, many troops were stationed in Lewes and the pool was used for training. While it may be no Costa del Sol temperature wise, it’s tree-lined green lawn, sun terrace and exercise lane create a picturesque scene, and partnered with children’s amusements, it makes for a popular family attraction.

The saltwater of this Olympic-sized, open-air heated seawater pool is taken from Stonehaven Bay, and is cleaned and heated to a temperature of 29° C (84.2°F). It opened in 1934 after a poll of Stonehaven locals supported its creation. During World War Two, the pool provided recreation and showers for local troops. For those who dream of swimming under the stars, Stonehaven also offers late night swimming sessions in summer.

Aldershot Lido opened in 1930 as an innovative and modern facility. The vast complex is home to the largest open air pool in the area, serving up three water slides, diving boards, water fountains and a range of water activities, as well as a football pitch, basketball court and nine acres of picnic area. Throughout the summer the venue also hosts a variety of events, such as an outdoor cinema and live music. 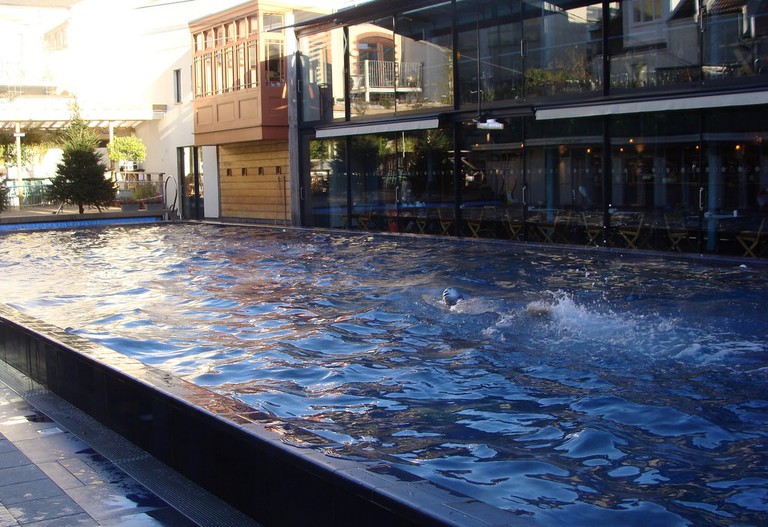 Enjoy the heated waters of this beautiful lido | © Nick / Flickr

As the oldest heated outdoor swimming pool in Britain, this Grade II-listed lido is Bristol’s most iconic hangout. Opening its doors for the first time in 1850, the pool is now open daily all year round. In 2006, the Glass Boat Company began restoration of the lido as a subscription pool with associated spa facilities, a restaurant and poolside bar. Re-opening in 2008 as a fairly exclusive, chic spot, the tile-lined pool and glass surroundings add an element of glamour to any everyday swim.