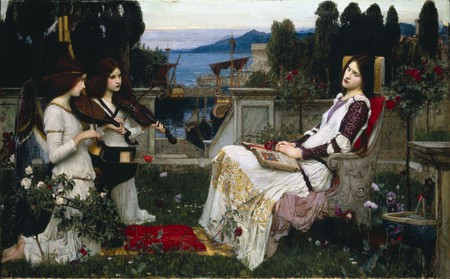 July: you love summer, you breathe summer, you roll yourself in the grass summer, and sometimes even choke on your own happiness—summer—for no good reason other than the fact that the sun is out and you’ve been told the guns (buns?) are set to follow. If you are indeed one of those people enamored by the heat, it shouldn’t surprise you to learn that the sweaty season wasn’t always just a synonym for vacation. It has in fact long been an artist favorite—a time for lofty verse-making, contented drinking, and Romantic agitation. The classic poems below, all connected one way or another to the days of warmth and moist abandon, should testify to that.

“L’invitation au voyage” (Invitation to the Voyage) by Charles Baudelaire

Besides being one of the Frenchman’s most famous pieces, the poem represents—mostly for the purposes of this listicle—one of the earliest, and certainly one of the most brilliant, calls for holiday travel ever found in the lyrical arts (though it’s apparently about the Netherlands, the language works equally well for equatorial paradises). The rhythmic chorus—“Là, tout n’est qu’ordre et beauté, / Luxe, calme et volupté”—makes it particularly difficult to translate, although we quite like Edna St. Vincent Millay’s 1936 effort.

What does the Ottoman capital, on a fine day of January in 1718, mean to the British ambassador’s wife, writer and poet Lady Mary Montagu? Why, it’s the place where “Summer reigns with one Eternal Smile,” of course. The fair city is made to contrast favorably with her native Britain, a “Frozen Isle” bound by “chilling Winter” and “deform’d by Rains.” Timeless.

“In the Mountains on a Summer Day” by Li Bai

As I wrote a few months ago, China’s most popular poet was rather interested in pastoral scenes. An adventurous fellow, he spent most of his life wandering around the country, befriending locals and reveling with the gentry. His taste for wine is well-known, as is his brand of carefree, highly Romantic poetry. A talent that makes his depiction of summer uniquely, well… satisfying?

For the queen of wit-bound and pithy verse, the long summer season—called Indian when it lasts into autumn—is the embodiment of adulthood. And the most important realization that accompanies ripening age, of course, is that which makes clear to all of us that we don’t really have to give a damn. Particularly, in this case, when it comes to the attentions of “every passing lad.”

Granted, this fragment from the ancient Greek poetess doesn’t have much to do with the season in question, and a whole lot more with loveache. And yet, while this poem is particularly well known for its meticulous description of heartfelt passion, something else about it catches the eye (in our chosen translation, at least). It makes a rare, uniquely negative use of summer, to effect a grim comparison: “Paler than summer grass, it seems / I am already dead, or little short of dying.”

The summer/winter dichotomy is here presented by the great poet in the most straightforward manner: as the opposition of warmth, brightness and triumphant nature with cold, darkness, and death. An added social dimension, in the form of sympathy for the “homeless beggar old,” is typical of the most politically sound of all British Romantics.

Although it doesn’t make any direct references to summer, Paul Verlaine’s “Green” centers around an activity that seems only properly feasible in the warmest of seasons. It is a declaration of contentment and love on a post-coital morning, where nature intrudes in the form of fruits, flowers, dew, and other delightful things. As summery a spirit as one can ever get.

From the Rubaiyat of Omar Khayyám, quatrain IX

Edward FitzGerald’s translation of the poetry of Omar Khayyám, the 12th-century Persian polymath, may not be known for its accuracy, but it is one of the most influential orientalist works of its time (partly because FitzGerald himself had a certain poetic talent). This particular quatrain uses summer roses to evoke a melancholy resignation to the passing of time. Another fatal take on the season, then.

For Emily Dickinson, joyful summer comes whatever the weather. This poem describes, in uniquely happy prose (where the rain, sun, and various inanimate objects are personified), the sun peeking out immediately after a light seasonal shower is pushed away by the wind. Everything is jolly, everything is marvelous, and quite frankly—given her usual tone—we get the sense that the mellow season’s really got to Emily.

“To Natasha” by Alexander Sergeyevich Pushkin

And who better to lament the end of what must be an exceedingly short Russian summer other than its national poet, Alexander Pushkin? The bard here mourns the passing of fair season in the light of unrequited love—typical—and cannot get over the fact that he won’t be able to see his beloved Natasha once winter settles. That is because, of course, they’ll have to spend those long months hauled up inside their respective homes.