The Coolest Soundtrack to Your Next Adventure in Ukraine 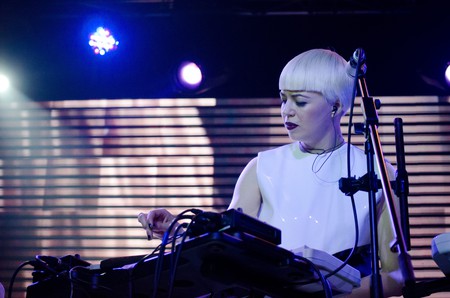 The alternative music scene in Ukraine is not yet widely known on an international stage, but it is one of the most exciting in the world. Here is an alternative soundtrack, introducing you to some of the acts shaping the diverse sonic landscape of contemporary Ukraine and beyond. The perfect accompaniment to travelling through the beautiful sights of the country, or just dreaming you were.

Onuka’s appearance during the interval of 2017’s Eurovision Song Contest in Kiev showed a wider audience that which electronica aficionados have known for a while – Onuka are special. The group, founded in 2013, often incorporate traditional Ukrainian instruments alongside their techno beats, such as the sopilka, a wooden flute, and the bandura, a kind of lute. Indeed, history plays an important role for the group, with the group’s name, Onuka, meaning ‘granddaughter’, a homage to the lead singer’s grandfather who was an expert craftsman, restoring and making musical instruments.

This quartet defies simple genre labels with these multi-instrumentalists combining elements of folk, techno, jazz and much else into one heady fusion, or as one of the group’s members, Marko Halanevych, calls it, ‘ethno-chaos’. Distinctly recognisable by their Ukrainian folk costumes, this group has been touring internationally for several years now, winning over an ever-growing fan base. With their name stemming from old Ukrainian for ‘give and take’, this is one band worth giving a listen to.

Panivalkova are an all-female trio who first came into the spotlight during the eighth series of the talent show X Factor Ukraine, but this group have a far more musical credibility than that might suggest. Referring to their music as ‘sensitive minimalism’, the band often craft songs with nothing more than a drum, piano and voices, which come together to create a musical force far stronger than their individual parts. The band are also perfect for an international audience, singing in five different languages: Ukrainian, Russian, English, French and Spanish.

Odyn v kanoe, meaning ‘one in a canoe’ is an acoustic indie collective formed in 2010 in Lviv, and after several years of touring, they released their debut double album in 2016. The magic of their music is in no small part thanks to the transcendent voice of lead singer, Iryna Shvaydak. They came to prominence in part for their arrangement of a poem by one of Ukraine’s most well-known poets, Ivan Franko. The title of the poem, Choven, refers to a traditional Ukrainian canoe-like boat. This is the perfect music to drift you off to calmer waters.

Jamala came to international attention after winning the 2016 Eurovision Song Contest with her song 1944 that told of her Crimean Tatar ancestors’ forceful resettlement to Central Asia from Crimea under Stalin. But she has a musical career far beyond that victory and is well known in Ukraine for powerful music that draws upon a range of sources, especially jazz, soul and blues.

This acoustic duo originate from Kharkiv, the second-largest city in Ukraine and first made their mark on the music scene during the early 2000s, going on hiatus in 2007, before reuniting again in 2015 to the delight of fans. The pair fuse together acoustic charm with laid back reggae beats and close harmonies, also often mixing Russian, Ukrainian and English within one song.

SunSay is the spin-off project of Andriy Zaporozhets, one half of 5’nizza. He founded the band to expand the range of music he could make and release, moving more in the direction of hip-hop and funk. The musical project has found great success with seven albums over the past ten years. In one of the group’s biggest hits, Vyshe Golovy or Above your Head, Zaporozhets shares his potential life motto: ‘Sing, read and unravel the mysteries of the universe.’

Iamyou are part of the reason why Kiev’s reputation as a centre for indie music is in ascendance. The group, originally from the small Northeastern city of Nizhyn, has been infusing the capital’s music scene with their experimental beats and catchy riffs for some time now and have worked their way into the hearts of many Ukrainian hipsters and indie music connoisseurs.

A key player on the blossoming electronic scene in Kiev is Mari Cheba. Exploring a range of musical influences, from downtempo dance music to rock, the constant in the range of music remains Cheba’s stunning vocals. The vocalist and her band have been causing a stir in Ukraine and were nominated in the category ‘Discovery of the Year’ at the 2016 Yearly Ukrainian National Awards (YUNA).

At the avant-garde end of contemporary Ukrainian music, Dakh Daughters are a creation of Kiev’s Dakh Contemporary Art Centre, inspired by traditional French cabaret. Comprised of seven actors, dancers and musicians, they perform with white-powdered faces and bright red lips, yet it is still their sound that leaves the lasting impression. Since 2012, they have been playing across Europe at a range of festivals and in 2016, the group released an album. A worthwhile adventure in music.

Sergey Onishchenko, the man behind Make Like a Tree, is a perennial wanderer. His first album is a result of his three year long hitchhiking journey from Ukraine to New Zealand. He recorded songs along the way and performed 250 gigs in 200 locations, in places as diverse as Bali and Hong Kong. His gentle vocals over a range of instrumental arrangements make for atmospheric meditations on time and love – one song even takes on the perspective of a bird overlooking a rainforest. The perfect accompaniment for reflective travels.

Bluegrass may not be the first genre you would associate with Ukraine, but this band make it work. Lemko refers to an ethnic group who traditionally live in Lemkivshchyna, a region in Western Ukraine, in the southern part of the Carpathian mountains. As the group describes themselves, they combine ‘Lemko bluegrass, Carpathian blues and Western swing’, a combination winning them toe-tapping fans both at home and abroad.